COMMENT: Russia will pay for export nuke plant in Bangladesh, host Bangladeshi nuclear waste – all for the cleansing light of nuclear power, no doubt

In yet another export deal marked with an astounding lack of solid reasoning, Russia’s State Nuclear Corporation Rosatom has managed to “sell” a nuclear power plant (NPP) project to the People’s Republic of Bangladesh. With no other convincing explanations in sight, the only plausible one seems that Rosatom, which has recently embarked on a crusade to root out corruption in the nuclear power industry, is doing just that: Helping Russia and its fellow corruption haven in South Asia finally “see the light.”

Published on November 8, 2011 by Vladimir Slivyak, translated by Maria Kaminskaya 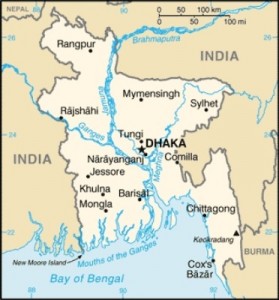 The intergovernmental agreement on building a nuclear power plant in the People’s Republic of Bangladesh was signed between Minister of Science and Information & Communication Technology of Bangladesh Yeafesh Osman and Rosatom’s head Sergei Kiriyenko in the Bangladeshi capital city of Dhaka on November 2, Rosatom’s Communications Department reported in a press release of the same date.

The agreement, the statement said, provides for construction of two nuclear power units each of 1,000 megawatts in installed capacity at a site in Ruppur (Roopur), about 200 kilometres north of Dhaka.

The reactor series in question is, apparently, the VVER-1000 of the pressurised water reactor type, a design developed in the 1970s that Rosatom typically offers for construction abroad – such as at Iran’s Bushehr, Bulgaria’s Belene, and India’s Kudankulam.

Besides promising to supply nuclear fuel to Bangladesh for the entire period that the new NPP will remain in operation, Rosatom also gave its new customer a verbal guarantee that the spent nuclear fuel (SNF) that will be generated at the plant – the most dangerous high-level radioactive waste – will be transported back to Russia. According to a RIA Novosti report (in Russian) that appeared on the website of the business publication Vedomosti, Russia will take back the spent nuclear fuel for reprocessing.

By law, import of spent nuclear fuel into Russia is only allowed for reprocessing. The law also provides for the option to store SNF for cooling purposes prior to reprocessing. But here’s one hitch: Russia does not reprocess SNF generated in VVER-1000s. In that, it simply has no technological capabilities to handle SNF of this kind. In other words, nuclear waste from Bangladesh can only be legally imported into Russia for long-term storage. And “long-term” here really means a very, very long time – up to a million years. The money to pay for the new storage facilities that will be required, the security to guard them, the emergency measures to clean up after potential radiation leaks, not to mention the energy that will be needed to keep the long-term storage sites functional – all that money will have to come out of the pockets of our children, then our grandchildren, then the grandchildren of their grandchildren…

What’s equally disconcerting is that even if Russia does at any point get around to building a reprocessing facility capable of handling SNF from VVER-1000 reactors, it won’t so much solve the SNF problem as create a new one – turning solid high-level radioactive waste into liquid radioactive waste. The very concept that is so promisingly, if misleadingly, called “reprocessing” leads to the generation of vast amounts of new waste in liquid form. That, too, will require storage facilities, personnel to manage them, power to run them. Long term. The world is yet to come up with an effective solution for its growing stockpiles of spent nuclear fuel, and here is Rosatom, bringing more trouble into an already dire situation.

According to that same November 2 report by RIA Novosti, Rosatom promised to have the new plant completed by 2017 or 2018. Seven years is also the time frame mentioned in a Platts report and another by AFP. The price cited by the press ranges between $1.5 billion and $2 billion.

This, to be sure, is rather amazing news. Because building a new reactor even at home, in Russia, usually takes much longer and costs much more, without the added headache of supplying equipment and human resources across half the world to a far-off republic on the shore of the Indian Ocean. And Russia is yet to develop all the needed documentation for the Bangladeshi NPP.

A November 2 AHN report cited Kiriyenko as saying that “such types of projects normally take five years to complete, but it will take a few extra years as the feasibility study has not been done.”

Judging by the completion date mentioned by RIA Novosti and other sources, Rosatom sets some two years aside to develop the necessary documents.

Now let’s take a recent example from Russia, to compare. On domestic soil, Rosatom has been planning to build a nuclear power plant with two 1,200-megawatt VVER-1200 units near the village of Monakovo in Nizhny Novgorod Region, in Central European Russia. The nuclear corporation is dead set on seeing this project to completion: Didn’t it already conduct, two years ago, a questionable public hearing to ramrod the new NPP through notwithstanding any public opposition?

A Nizhny Novgorod-based engineering company called Atomenergoproyekt is in charge of designing the new plant, and about a month ago, this company announced that the preliminary cost of one reactor was estimated at around $2.5 million per megawatt of installed capacity – or $3 billion per unit. Plus, the company said, according to this RIA Novosti  report of September 30 (in Russian), the launch of the first reactor was expected in 2019.

So, to sum up, a domestic construction project – one, furthermore, that has two years’ head start at least where project documentation is concerned (and as of 2011, it is also supported by a construction license) – takes $3 billion and a decade overall to complete. And an export one in Bangladesh, where all required documentation will yet need at least a year to put together, with all the, shall we say, appreciable distances to ship the equipment to and the expenses that that must entail – is supposed to cost at least 1.5 times as little and be finished within just seven years.

Actually, the price issue seems in need of some additional clarification. Russia’s RIA Novosti reports of $2 billion for the “project,” the AFP report says this is how much each of the two reactors will cost, and the language in the Platts and AHN stories allows for interpreting this in either way. Rosatom says nothing of the project’s overall cost in its press release, but then, it’s unlikely the Bangladeshi sources just made that figure up.

Depending on how you read this information, one Russia-made Bangladeshi reactor and one built inside Russia – regardless of what variations may be between the two designs within the same series – could be apart, price-wise, by a factor of between 1.5 and 3, or even 4 times.

But the most interesting aspect of this story is that Bangladesh will not be the country that will pay for the construction – Russia will.

“The Russian Federation will fund construction of the plant, supply fuel for the plant for its lifetime, take back spent fuel, and provide training,” AFP quotes Shawkat Akbar of the Bangladesh Atomic Energy Commission as saying.

Platts adds, citing Kiriyenko’s remarks given at a press conference in Dhaka, that the Russian government will provide a state loan to Bangladesh to implement the nuclear power plant project. And will help with decommissioning, to boot.

But though Rosatom is a corporation, it is a state corporation, and the credit funding in question will necessarily come from the Russian state budget.

For the Russian taxpayer, questioning the real value of this deal is hardly an idle speculation. But maybe the very idea of supplying the people of Bangladesh with energy from a nuclear power plant built on the Russians’ tax money is worth spending at least $2 billion now and countless dollars more on storing the resulting nuclear waste for the next million years? At least the Bangladeshi will pay for the fresh fuel deliveries.

The situation with energy demand in Bangladesh could indeed provide a plausible motive for Rosatom’s generosity. The rather enthusiastic AHN report datelined Dhaka refers to Bangladesh as “energy-starved” and describes the country’s energy predicament in words that speak of eternal gloom which only the light of nuclear-produced power could help dispel: “Nearly 40 percent of the population has access to grid electricity, leaving the rest in a state of darkness that dates back to the origin of human society. Renewable energy such as solar power and wind farms contributes less than 1 percent of the demand.”

Not everything in this world can be measured in dollar signs. So next time ordinary Russian citizens – teachers in the provinces, seniors on retirement, large families with little income that for decades have been stuck on the waiting lists for government-assisted housing – next time that, guided by their selfish pecuniary interests, they start asking questions about why Russia is so keen on building a nuclear power plant on a distant continent, why it will pay for everything except fresh nuclear fuel, and why it is so willing to store the nuclear waste that will come from this act of unrivalled goodness, next time they get so needlessly curious, they should seek solace in knowing that Russia is bringing the much-awaited light to Bangladesh – and, well, the moral satisfaction of seeing Kiriyenko close another hopeless deal.

Never mind that one of the most polluted countries in the world has no budget for environmental remediation. After all, we import nuclear waste exactly in order to earn enough to clean ecologically affected Russian areas from radioactive contamination. So what if each year those areas grow in scope and number?

And then, there is another element to this story that may help explain what common human logic fails to disentangle. What unites Russia and Bangladesh besides this newly forged nuclear cooperation is that both countries are found at the very bottom of Transparency International’s Corruption Perceptions Index, a tool that ranks some two hundred world countries by their perceived levels of corruption as based on expert assessments and opinion polls. On a scale from ten (very clean) to zero (highly corrupt), Russia scores 2.1 and Bangladesh is not far behind with a score of 2.4.

Experience shows this is just the kind of seedy neighbourhood Rosatom tends to scour as it looks for potential customers to peddle its nuclear power plant projects to – Belarus, Kazakhstan, Vietnam, Myanmar are all among the undisputed headliners on that list. And in each case, Russia pays both for the construction and accompanying services.

And remember how a month ago or so Rosatom revealed unprecedented courage and enviable determination as it set about eradicating corruption in the Russian nuclear industry? It all adds up now: Corruption is a dark beast, and a healthy searing beam of light is what it needs to send it running, tail between its legs. Not enough energy to power it? Not to worry. Nothing like a VVER-1000 from good old Rosatom to save the day.

Vladimir Slivyak, co-chair of Ecodefence, is a frequent contributor to Bellona.