German industrial giant Siemens has announced it is turning the page on nuclear energy, the group’s CEO Peter Loescher told the Der Spiegel weekly in an interview published on Sunday in a surprising announcement that brings the firm into line with Berlin’s plans for a nuclear phase out.

Published on September 20, 2011 by Charles Digges 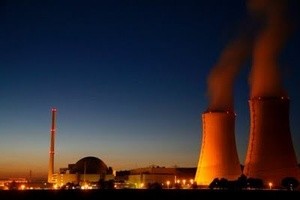 The engineering giant also says that it will lay more emphasis on designing and marketing products for renewable energy.

“We will no longer be involved in overall managing of building or financing nuclear plants. This chapter is closed for us,” Loescher said, explaining that Siemens would restrict its activity to double-use technology.

“We will from now on supply only conventional equipment such as steam turbines. This means we are restricting ourselves to technologies that are not only for nuclear purposes but can also be used in gas or coal plants.”

The announcement was greeting warmly by environmentalists.

“Siemens’ decision came as a sudden surprise,” said Igor Kudrik, a nuclear power expert with Bellona. “But if the world’s leading engineering company can scrap nuclear technology, it just shows that there is no future in it.”

Siemens, which built all of Germany’s 17 nuclear power plants, is the first large company to announce such a shift in strategy following Fukushima. But other German companies involved in the nuclear energy industry are also reconsidering their options, according to various German press reports.

Nuclear power accounts for 23 percent of electricity production in Germany. The government is putting in place an ambitious plan to increase the share of electricity generated from renewable sources to 35 percent by 2020, up from around 18 percent now.

“It is a good sign that Siemens now is shifting its focus away from nuclear activities,” said Nils Bøhmer, Bellona’s executive director and nuclear physicist.

“From our close cooperation with Siemens, we know that they have already put significant efforts into energy efficiency, renewable energy technologies and carbon capture and storage,” he said. “We hope these efforts will be strengthened in the future.”

Loescher called the government’s plans for renewable energy “the project of the century.” Although the government’s goal has met with skepticism in some quarters, he said the 35 percent figure was “achievable.”

No deal for Rosatom

Rosatom spokesman Sergei Novikov acknowledged this, saying, “Cooperation will continue in other spheres. Working groups are continuing the talks on this issue.”

“Siemens is following the position of the German government, which made the decision to gradually abandon nuclear energy,” added Novikov.

“The two groups are still very interested in a partnership but it will be in another field,” he said.

Novikov added that one possible area of cooperation between the two corporations could be in the area of nuclear medicine.

Rosatom signed a memorandum of understanding with Siemens to create a joint venture, but this enterprise was never created in the end, Novikov said.

Its creation had been delayed after Siemens’ former partner, French nuclear giant Areva, went to arbitration to try to block the Rosatom deal in a case that only ended in May, after the Fukushima disaster in March.

Siemens’ in line with German society

Germany is the first major industrialised power to agree an end to atomic power since the disaster, the world’s worst since Chernobyl in 1986, with tens of thousands of people living near Fukushima Daiichi evacuated.

Switzerland is poised to follow, saying it will shut down its five nuclear reactors by 2035, and Italy turned out for a resoundingly popular referendum to vote against even beginning a nuclear program in its country.

Japan’s new prime minister, Yoshihiko Noda, said last week that his country will work to phase out nuclear power over the next 40 years. Bu t he is also urging a restart for all of Japan’s reactors besides those at Fukushima Daiich that shut down after March 11 9.0 magnitude earthquake and ensuing tsunamis.

Tens of thousands turned out in Tokyo over the weekend to protest the restarts of the reactors and to demand a nuclear free future for Japan.

Experts have estimated that the Fukushima Daiichi disaster, which is ongoing and still releasing radiation into the atmosphere, will eventually surpass radiation releases from Chernobyl in 1986.