NEAR THE OLKILUOTO NUCLEAR POWER PLANT, Finland – Andrei Ozharovsky, a nuclear physicist and a Bellona expert who writes regularly for Bellona’s Russian website was detained by the Finnish police on August 20 together with 50 other participants of a peaceful demonstration rallying against nuclear energy 13 kilometres from Finland’s Olkiluoto Nuclear Power Plant (NPP).

Published on August 23, 2011 by Bellona, translated by Maria Kaminskaya 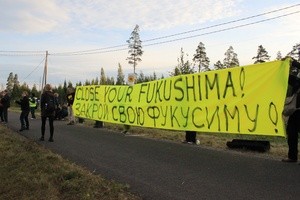 Over 200 people were taking part in a range of anti-nuclear protest actions held on August 20 in Finland, including a blockade of an access road to the Olkiluoto site. The participants included representatives of ten ecological organisations from various countries, including several international ones: France’s Sortir du Nucleaire, Friends of the Earth Finland and Friends of the Earth Sweden, Priroda i Molodyozh (Nature and Youth) from Murmansk, Russia, the Belarusian Anti-Nuclear Campaign, and Finland’s Women Against Nuclear Power, the No More Nuclear Power movement, and the youth organisation For Nature Conservation. Two Russian citizens also arrived to participate in the protests.

The demonstration, announced in the media as the Olkiluoto blockade, drew the attention of Finnish authorities; a police force scrambled from all over Finland was brought on the scene in numbers equalling those of the protesters.

This is the second Olkiluoto blockade; the first one took place a year ago and ended with detention of thirty participants. Last year, the protesters managed to block traffic on the Pori-Rauma-Turku highway 13 kilometres away from Olkiluoto, as a well as an access road to the station.

This year, police prevented the activists from setting up road blocks, securing an area within a fifteen-kilometre radius around the plant against unauthorised access by anyone other than local residents or Olkiluoto employees. The protesters were allowed a narrow space at a bus station 13 kilometres away from the Olkiluoto site. Access to the fifteen-kilometre secure perimeter was banned to the media. The Olkiluoto plant’s own public information centre also remained closed due to the protests.

“Today, unfortunately, this area is closed off for security reasons because of the demonstration and the blockade,” Superintendent Lars Granros of the Satakunta police in Finland told Bellona. “Representatives of the mass media are welcome to official statements and press releases.”

Lea Launokari from the Finnish organisation Women for Peace was one of the participants of the protest.

“This is idiotic, standing here at the bus station, because a demonstration must attract the attention of people, local people mostly,” Launokari told Bellona reporters at the protest. 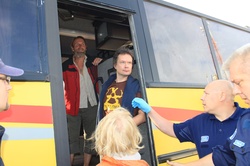 Protesters were detained as they attempted to step into the road leading to Olkiluoto and were then brought to the closest regional centre of Rauma for processing of a misdemeanour offence.

Among the detained was Bellona’s Ozharovsky.

“I walked into the road together with the other protesters,” Ozharovsky told Bellona from the police bus as he was being detained. “This was an improvised picnic, with demonstrators singing, playing musical instruments, treating everyone to tea and coffee, chanting slogans against the Olkiluoto NPP.”

“The police detained me without any warning. I asked why. They told me I had been warned. But I don’t understand Finnish and I hadn’t heard the warning,” Ozharovsky continued. “I came to take part in the Olkiluoto blockade because this nuclear power plant is of the Fukushima type and presents a grave danger for the population of [neighbouring] Russia, in particular, St. Petersburg and Russia’s Northwest. Just like the [Leningrad Nuclear Power Plant, in St. Petersburg] is dangerous for Finland and other neighbouring countries. This is why we call for the shutdown of nuclear power plants.”

Launokari from Women for Peace believes the detention may be inconsistent with the Finnish law.

“In accordance with the Finnish law, the police must give three warnings before they proceed to detain, but why they didn’t do it, I don’t know,” Launokari told Bellona. “Maybe they did it in Finnish, but Andrei doesn’t understand Finnish.”

Ozharovsky was released after spending 10 hours in detention at the police precinct of the town of Rauma. He was charged with disobeying the police and fined €60.

Ozharovsky said he intended to file a complaint protesting the police’s actions with the prosecutor’s office in Pori. Other protest participants have indicated they will file complaints as well.

Nine other protesters were detained by the police on an access road to Olkiluoto that ran parallel to the one where Ozharovsky was detained. These nine had managed to block traffic temporarily by placing a 4-metre-high tripod made of wood in the middle of the road. One of the activists then chained herself to the tripod.

The police sought to prevent journalists from taking footage of the tripod action. Tatiana Novikova from Belarus, a frequent contributor to Bellona’s Russian website, and Falk Beyer from Germany were stopped by the police, who demanded their IDs and held their passports for about half an hour. The police explained this was for identification purposes.

Altogether, fifty participants were detained during the protest. 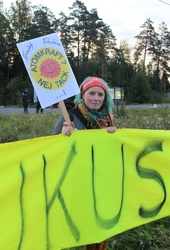 Tatiana Kulbakina, from the Murmansk-based Priroda i Molodyozh, who participated in the protest near Olkiluoto, said she was indignant over the Finnish police’s actions.

“The police is doing everything today to protect the Finnish NPP from us. As far as I know, police in Finland must protect demonstrators, too. And here, they are isolating us and defending the nuclear industry,” Kulbakina told Bellona. “Our organisation is taking part in the demonstration because Olkiluoto affects the ecological interests of the residents of Murmansk Region and other Russian territories.”

At noon, representatives of the Finnish movement Women Against Nuclear Power also staged a series of anti-nuclear pickets at a market in the centre of Euraoki, Olkiluoto’s satellite town. Some of the locals expressed their support of the protest, even though the town is dependent on the nuclear power plant and is the place of residence for Olkiluoto’s employees.