AMSTERDAM – As Japanese officials took the extraordinary measure of flooding with sea water the ailing No 1 reactor at Fukushima Daiichi nuclear power plant in a last ditch effort to stave off a meltdown, an official of Japan’s nuclear safety agency said that the number of people exposed to radiation from the quake-rocked plant could reach as high as 160. 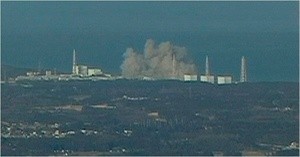 Many reports flowing from Japan early on Sunday were focusing on the notion that the danger of a meltdown had passed, most significantly reports quoted by the New York Times.

But almost as soon as the Times story appeared, CNN issued a report quoting an official with Japan’s nuclear safety agency saying a meltdown was, in fact, underway.

Though officials said late Saturday that leaks of radioactive material from the aging plant 240 kilometers north of Tokyo were receding and that a major meltdown was no longer imminent, the government nonetheless doubled its evacuation radius around the plant to 20 kilometers.

The evacuation is not yet complete.

Three reactors at Fukushima Daini are also experiencing coolant system problems of their own, and were reported to be emitting radioactive steam.

The reactor problems do not end there. Fukushima Daiichi Unit 3 is also experiencing cooling problems, according to a Reuters report.

But Unit 3 poses a special kind of danger that even Unit 1 does not, said Vladimir Slivyak, co-chair of Russia’s Ecodefence, in an email interview. Unit 3 has been running on mixed uranium and plutonium oxide, or MOX fuel, since September.

“If things take an unfortunate course at Unit 3, then japan will be facing real plutonium contamination,” said Slivyak.

The Nuclear Information Resource Service reported that Japanese authorities are preparing to distribute potassium iodide to the public in the most affected zones. Potassium iodide helps protect against thyroid cancer caused by exposure to radioactive Iodine-131 – a radioactive isotope emitting during the melting of reactor fuel.

If Japanese officials are reporting that danger has passed for the feverish reactor, the actions they are taking would seem to contradict there reassuring announcements.

Naoto Sekimura, a professor at Tokyo University, told NHK, Japan’s public broadcaster, that “only a small portion of the fuel has been melted. But the plant is shut down already, and being cooled down. Most of the fuel is contained in the plant case, so I would like to ask people to be calm.”

Slivyak responded to this quote by saying, “this statement is malformed. The core is melting and they continue to say everything is all right – as if to say ‘you are going to die, but don’t worry.’”

In a Washington DC press event this afternoon, former NRC Commissioner Peter Bradford pointed out that no government would evacuate so many people in the midst of an ongoing natural disaster “unless the situation were extremely serious.”

The operation to flood the reactor with sea-water and boron began late Saturday night Japanese time as workers attempted to prevent temperatures from racing out of control, the International Atomic Energy Agency said. Early this morning, some 90 centimeters of uranium fuel elements were left exposed after coolant had evaporated away.

The use of sea water and boron was described as a “Hail Mary pass” by Robert Alvarez, senior scholar at the Institute for Policy Studies focused on energy policies and a former senior policy adviser to the U.S. secretary of energy.

“My understanding is that the situation has become desperate enough that they apparently don’t have the capability to deliver fresh water or plain water to cool the reactor and stabilize it and now, in an act of desperation, are having to resort to diverting and using sea water,” he said.

Boron, a chemical element, was being added to the water “to sort of stymie other potential nuclear reactions,” he said.

But, he acknowledged to reporters in a conference call, “There’s a lot that we don’t know about what’s happening with these reactors. It’s trying to piece together a picture where you’re dealing with just a few pieces of the puzzle.”

Slivyak was similarly uncertain about what results flooding the reactor would bring.

“This flooding idea may work or may not,” he said. “If it doesn’t then they will need to pump sand and cement into the reactor. It’s clear that crisis is not over yet.”

Nine individuals had already shown possible exposure to radiation from the plant, based on information from tests by municipal authorities and other sources, and estimates from the authorities suggested the figure could rise as high as 70 to 160, the official from the Japan Nuclear and Industrial Safety Agency told a news conference, Reuters reported.

Three people who were working on efforts near the Fukushima Daiichi plant were earlier reported to be suffering from radiation exposure.

The events of the day in Japan have been extraordinary, leading many to believe that a Chernobyl scenario was looming.

Japan has rated the its nuclear difficulties as a 4 on the seven point International Nuclear Event Scale. Four on the INES is characterized as an “incident with local consequences.” But Slivyak suggested that rating would likely be upgraded.

The building housing the reactor containment chamber blew apart in a hydrogen explosion on Saturday, blowing off the roof and buckling the walls, but leaving the reactor chamber intact, said Japanese officials.

Monitors detected caesium in the atmosphere – another indicator of melting nuclear fuel – even before the explosion, Japanese nuclear officials said.

Radioactive gas was also released from Fukushima Daiichi No 1 reactor earlier in the day to reduce a build up of pressure within the reactor chamber. Within, radioactivity levels soared to 1000 times normal, and outside the plant’s gates, radioactivity was measured at 70 times normal.

Even if Japan manages to avoid large, uncontrolled releases of radiation that would result from a meltdown, the problems at the Fukushima facility already amounted to the worst nuclear accident in Japan’s history and perhaps the biggest malfunction at a nuclear plant since the Chernobyl disaster 25 years ago, the worst ever.

The handling of the crisis and vulnerability of Japan’s extensive nuclear facilities to earthquakes and tsunamis will also add to long-simmering grass-roots resistance against nuclear power within Japan, where people have learned to doubt the industry’s reliability as well as anodyne official statements about safety.

Indeed Japanese offcials were at pains to draw distinctions between Fukushina Daiina and Chernobyl noting that because of crucial design differences, the release of radiation at the Fukushima plant would most likely be much smaller than at Chernobyl even if the Fukushima plant suffers a complete core meltdown.

“The events in japan demonstrate with all palpability the special vulnerability of the nuclear industry to extraordinary natural phenomena. And this completely destroys the myth of the reliability and safety of contemporary nuclear technology,” said Slivyak.

He noted that with the process of global climate change and erratic and severe weather patterns becoming more obvious, the risk of nuclear energy would be displayed more and more vividly and with worsening consequences. He cited as examples wherein Russia’s Kola Nuclear Power Plant was deprived of power by heavy winds in 1993. In 2000, a glitch in the Sverdlovsk Regional electrical grid cut off power to the nuclear reactor at Mayak.

“We’ve been lucky so far, but will that continue to be the case?” he said. “The events in Japan should serve as a good lesson […] and this lesson is that nuclear energy in principle cannot be safe.”