AMSTERDAM – An officially confirmed explosion has been heard and plumes of white smoke have been seen at the earthquake-stricken nuclear power plant Fukushima 1 (Fukushima Daiichi) in Japan amid fears that a meltdown is already underway. 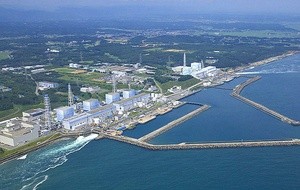 Japanese officials said on Saturday there had been an explosion at the plant following Friday’s huge earthquake, blowing off the roof of the structure and causing a radiation leak of unspecified proportions.

The chief cabinet secretary Yukio Edano confirmed earlier reports of the explosion, according to the New York Times.

“This is the worst nuclear scenario since Chernobyl ,” said Bellona nuclear physicist Nils Bøhmer. “The explosion took out the last containment area, fuel is damaged and melting and measurements of caesium are rising. This is terrifying.”

Bøhmer added that the smoke that has been observed is most likely radioactively contaminated, particularly with iodine and caesium, which result from the activity of the nuclear fuel.

Japan’s nuclear agency confirmed to CNN that there was a strong possibility that the radioactive caesium detected by monitors was caused by the melting of a fuel rod at the plant, adding that engineers were continuing to cool the fuel rods by pumping water around them.

“This is a dramatic situation and things are not under control,” said Bøhmer. “There will likely be strong local effects.”

Among these effects Bøhmer listed un-inhabitability of the area surrounding the Fukushima plant. Yesterday, some 3,000 residents were evacuated from the three-kilometer radius around the plant.

Today that government order extended to 30,000 residents living in the 10-kilometre radius surrounding the plant. As a result of the quake and subsequent tsunami, five of Japan’s 55 nuclear reactors were shut down.

A suspected explosion of hydrogen gas, which has not been officially confirmed, may have occurred earlier today. Hydrogen is used to cool the reactor, which is already struggling with its damaged cooling system. It was earlier established that fuel had been melting at the site of the explosion, Russia’s Ecodefence said, citing Japanese news reports.

As a result of the explosion the fourth reactor at the station – whose other three have been the focus of a massive cooling effort – also suffered damage, said Russia’s Ecodefence, which is issuing regular briefings on the emergency on its website. The explosion was preceded by an aftershock to yesterday’s 8.9 scale earthquake, which is the worst to hit Japan since record began to be kept in the 1800s.

In other areas, radioactivity in the reactor’s control room is 1,000 times the normal level, Kyodo News  reported.

Radioactivity levels were confirmed to be on the rise by Japanese officials. According to Japan’s Economic Ministry,  Trade and Industry, one of the reactors is experiencing an uncontrolled chain reaction, while outside the plant contamination by caesium 127 has exceeded natural levels by 70 times, said Kyodo news.

By most accounts, radiation leaks have occurred at the No. 2 reactor, which on Friday suffered a major malfunction in its cooling system.

Before yesterday’s catastrophic earthquake and ensuing tsunamis, Fukushima Daiichi operated six reactors, and another four were in service at Fukushima’s second plant, Fukushima Daini. Both are operated by Tokyo Electric Power Co (TEPCO) are located 240 kilometres north of Tokyo.

Residents remaining in the region have been urged to stay indoors, after Japan’s Nuclear Safety Commission said the plant may be experiencing meltdown. This had been a suspicion since yesterday when more than 3,000 people where ordered evacuated by the government from Onahama City where the Fukushima plant is located. By this mornig, 30,000 had been evacuated.

Emergencies had been declared yesterday due to the cooling system malfunction. Technicians had been working hard to cool the Fukushima Daichi units 1,2 and 3, which shut down immediately after the earthquake  yesterday.

But an hour later, onsite local diesel power units, which are the back up generators for the cooling system also failed, leaving the reactors without alternating current (AC) power, reported Reuters.

That prompted TEPCO to order the evacuation. Such a [power] blackout is “one of the most serious conditions that can affect a nuclear plant,” according to experts at the Union of Concerned Scientists, a U.S. based nuclear watchdog group.

“If all AC power is lost, the options to cool the core are limited,” the group said in a statement published on it’s website.

Japan informed the International Atomic Energy Agency (IAEA) the quake and tsunami cut the supply of off-site power to the plant and diesel generators intended to provide back-up electricity to the cooling system.

Additional generators were supplied to the site, which were hoped to allow TEPCO to bring the situation in hand. Left unchecked the coolant could boil off within hours. That would cause the core to overheat and damage the fuel, according to nuclear experts familiar with the Three Mile Island accident in Pennsylvania in 1979.

Ecodefense’s co-chair Vladimir Slivyak said, however, that the situation seems to have surpassed Three Mile Island.

“This is going to be more than a Three Mile Island, would be by guess,” he said in an email interview. “This is far from over.”

If the core overheats, then the fuel would become damaged and a molten mass could melt through the reactor vessel, releasing a large amount of radioactivity into the containment building surrounding the vessel.

Will the containment building hold?

It is unclear if the quake has undermined the containment building, which might allow radioactivity to leak out

Ian Hore-Lacey, of the World Nuclear Association, a group supportive of the nuclear industry, told Sky News that safety measures at modern plants such as Fukushima should ensure the safety of surrounding residents.

“If there were any meltdown in those reactors, it would be largely, if not entirely, contained,” he said.

He said western reactors are built inside a containment structure of reinforced concrete that is some 1.2 metres thick and that are designed to contain the worst accidents conceivalble.

“You can’t get a nuclear explosion at a nuclear power plant. That’s quite impossible, because they’re run with fuel that’s only enriched to about 5 percent at the most.”

The radioactive steam was released early this morning to reduce rising pressure in the plants.

Ryohei Shiomi, of Japan’s nuclear safety commission, told reporters that officials were checking whether a meltdown had taken place at the Daiichi power plant.

He said that, even if there was a meltdown, it would not affect humans within a 10 kilometre radius, an opinion strongly opposed by environmentalists.

The nuclear plants are both at Tokyo Electric Power Company’s (Tepco) Fukushima facility. Pressure at one – the Daiichi reactor – may have risen to 2.1 times the designed capacity, the country’s trade ministry said

Tepco later confirmed to Japanese media that it had released a small amount of radioactive vapour into the atmosphere to reduce the pressure and said there were no health risks.

Tepco said it had lost ability to control pressure in some of the reactors in both the Daiichi and Daini plants. Pressure was stable inside the reactors of the Daini but rising in the containment vessels, a spokesman said.

The 8.9 magnitude quake has left at least a 1,000 people dead and triggered a tsunami that devastated parts of Japan and set off tsunami warnings in 50 countries. In the US state of Hawaii, boats where pitched about in exceptionally high waves.

The reactors shut down due to the earthquake account for 18 percent of Japan’s nuclear power-generating capacity, according to the World Nuclear Association. Many of Japan’s 55 nuclear power plants are located in earthquake-prone zones such as Fukushima and Fukui on the coast.

The IAEA estimates that around a fifth of nuclear reactors around the world are currently operating in areas of significant seismic activity.