MOSCOW – Germany’s Greenpeace and locals residing near seven of the country’s oldest nuclear power plants (NPPs) have filed a complaint with the Constitutional Court contesting the government’s recent decision to extend the plants’ operational licenses beyond 2022. The action is soon to be joined by parliament members and governments of five federal lands.

Published on February 7, 2011 by Andrey Ozharovsky, translated by Maria Kaminskaya 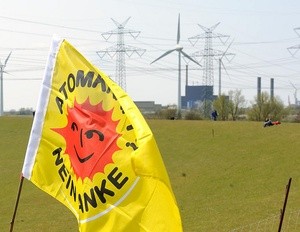 “The deal [made by the government of Angela Merkel] with nuclear corporations has violated the rights of German citizens as guaranteed by the law. What will be profit for the corporations will be a risk for the public,” Heinz Smital, Greenpeace Germany’s nuclear expert, said of the complaint. “Continuing to operate the old reactors is extremely dangerous. We do not see any solutions to the problem of safe management of radioactive waste. There is no other industry that would be allowed to work unimpeded while running at such a high risk of accidents and producing the most hazardous waste there is in the world.”

Greenpeace is against extending operational licences for nuclear power plants on principle, but this specific complaint, filed with the country’s Constitutional Court, has to do with enforcing the German citizens’ right to be protected from harm threatening their lives or health.

Environmentalists believe that amendments introduced by the Merkel government into the Law on Atomic Energy make this issue an especially complicated one as the law now obligates NPP operators to reduce risks “for the population.” According to Greenpeace, this may be used by the nuclear industry as a loophole to avoid responsibility for risks incurred on private citizens.

It is possible that courts will be forced, as required by the new language of the law, to reject complaints filed earlier by individual complainants over the issuance of extended operational licenses for old reactors. When earlier, citizens were entitled by law to seek protection from, and contest in court, pollution effected by nuclear power plants, the amended law strips them of that right, environmentalists say.

Meanwhile, experts say even nuclear power plants proceeding in a normal, accident-free operational mode are dangerous for population health. Recent studies in Germany have established that incidence of childhood leukaemia more than doubles in populations residing in the vicinity of nuclear power plants, compared to those living in nuclear-free territories.

The complainants also tell the Constitutional Court that seven of the oldest German nuclear power plants now expecting extensions on their operational licences exhibit significant deficiencies in their compliance with up-to-date safety and security standards. None of the reactors, the complaint says, are fit to withstand the fall of a large airliner. The seven oldest reactors are only equipped with limited protection against the impact of a smaller passenger plane. And all these old reactors are vulnerable to the threat of a terrorist attack carried out with conventional weapons, the complaint says.

Citing the risks and potential consequences of a terrorist attack, Greenpeace and residents of areas where the oldest NPPs are operated also demand that licenses be revoked for six oldest nuclear reactors – Biblis A, Biblis B, Isar 1, Krümmel, Brunsbüttel, and Philippsburg 1. 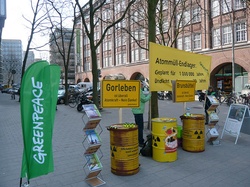 Compounding the pressing nuclear problem in Germany is the as-yet unsolved fundamental issue of disposing of nuclear waste – nuclear fuel that, once used up in reactors, has to be safely accommodated for thousands of years until its radioactivity levels subside. The issue remains fraught with safety and environmental concerns as well as legal uncertainties.

Greenpeace points out there are no satisfactory solutions for spent nuclear fuel – not even in Germany, which sends spent nuclear fuel for reprocessing abroad and then places the resulting high-level radioactive waste in a special storage facility near the town of Gorleben .

“It has long been established that Gorleben is not a suitable storage solution,” Smital says. “Gorleben is a mirage.”

Other German organisations and public initiative groups, as well as public representatives and local state officials, intend to join Greenpeace with complaints of their own, also to be filed with the Constitutional Court on account of the amended law on nuclear energy. Among them are a group of parliament members and members of governments from five federal Länder – Rheinland-Pfalz, Bremen, Brandenburg, Berlin, and North Rhine-Westphalia – who plan to contest the amendments, introduced by the federal government, that allow NPP owners to continue operating old reactors after 2022, which was the shutdown deadline provided for in the previous version of the law.

In the 1990s, yielding to pressure brought on by public protests, Germany moved to phase out nuclear energy and shut down all of its nuclear reactors. However, Merkel’s government revised that decision in 2010, even though the official policy remains that of abstaining from new reactor construction, as nuclear energy is considered a temporary solution until Germany is able to fully sustain itself on energy supplied from renewable sources.