ST. PETERSBURG – Russia and Belarus have negotiated to sign in the first quarter of 2011 a “framework agreement” that is expected to lay a first brick of the highly unpopular construction project of a nuclear power plant in Belarus’s Ostrovets. Environmentalists are sceptical, however, that the site will see the light of day any time soon

Published on January 21, 2011 by Maria Kaminskaya 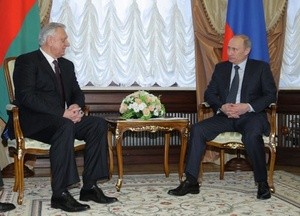 The preliminary agreement came during a high-level meeting on January 20 between the Russian Prime Minister Vladimir Putin and his Belarusian counterpart, Mikhail Myasnikovich, while on a visit to Moscow.

The two were discussing energy cooperation, including the heavily criticised project of a nuclear power plant Belarus intends to build in Ostrovets, near the Lithuanian border, with Russia’s help.

The project envisions using an as yet untested Russian design to build two VVER-1200 reactors to a projected combined capacity of 2,400 megawatts. The first reactor is slated for launch in 2016.

The plans, promoted aggressively by the Belarusian government, have faced strong public opposition in Russia, Belarus, and Lithuania and vigorous objections on official levels from countries that may potentially be directly affected by the plant’s future operation.

Belarus and Russia will now have to work out the costs and time frames of the future construction, media reports say. Russian media sources quote Putin as saying construction costs are currently estimated at $6 billion. The Belarusian side earlier considered seeking a $9 billion credit from Russia to build the plant.

Russian and Belarusian media sources report Putin as saying that Moscow and Minsk are in the process of approximating their positions on each of the sides’ investments into the project, but the final amounts are to be agreed on later. Russia will likely seek a 50 percent ownership share in the future site.

According to Myasnikovich, his conversation with Putin included a discussion of the role of Belarusian companies in carrying out the project.

“There is full understanding that the Belarusians, using those possibilities that are available to us, will be actively involved in the implementation of this project,” Myasnikovich was quoted by the Russian and Belarusian media as saying. He added that the plant is expected to produce around 28 percent of the total installed capacity of the country’s energy complex.

“This is certainly [a matter of] energy and, to an extent, national security [for Belarus], and this project remains, as before, of immediate interest, one of the main projects for the coming years. I see good prospects here,” Myasnikovich said.

Ecologists, meanwhile, are indignant that Russia is taking steps to finance a highly unpopular project with money that will come from the Russian state budget.

“It is outrageous that Russia is doing this with the Russian taxpayers’ money. The project is a disaster and it’s simply not ready for realisation,” Vladimir Slivyak, co-chairman of the Russian ecological group Ecodefense! told Bellona Web. “Putin is one of the richest men in Europe – let him finance this project out of his own pocket.”

Yet environmentalists remain unconvinced that the project will materialise any time soon and cite many violations of both national Belarusian and international laws that have been registered while the project was undergoing discussions at public hearings in Belarus and evaluations of its potential environmental impact.

These – as well as Russia’s own economic problems – may stall the project indefinitely, Slivyak said.

One of the many objections ecologists have voiced to the project is that Belarus has settled on an experimental Russian reactor design even though the Belarusian legislation stipulates that the technology chosen for construction of a nuclear power plant must be tested in practical operation.

Initial construction works have already started in Ostrovets even as no sufficient geological data exists to support the selection of the site – something that the official environmental impact assessment report prepared by Belarus for Ostrovets admits in its analysis of the safety of the future plant.

Independent and official experts from Russia, Belarus, Lithuania, and Austria earlier pointed to significant gaps in the official environmental impact report – such as that it downplays considerably the plant’s anticipated impact on the surrounding environment and the health of the local population both as part of standard-mode operation and in case of an accident.

The construction is especially worrisome to Lithuania, which objects to having a nuclear power plant built less than 50 kilometres away from its capital, Vilnius. By starting construction works in Ostrovets against Lithuania’s objections, Belarus has violated international environmental agreements, such as the Aarhus and Espoo conventions, environmentalists say – a fact that is already causing tensions with Belarus’s closest neighbours.

On the eve of Myasnikovich and Putin’s meeting in Moscow, a number of ecological NGOs – including Ecodefense! and Belarus’s Ecodom (Ecohome) and the Green Party, among others – distributed an open address to the governments of Russia and Belarus, urging Moscow to reconsider providing financial backing to the Ostrovets project and for both countries to scrap the dangerous idea altogether.

But not all hope is lost, Slivyak told Bellona.

“There are yet documents that need to be signed for the creation of a joint enterprise [between Russia and Belarus], and credit agreements have to be signed,” he said. “It is too early yet to stop all resistance.”

While it is difficult to try to change the situation in Russia – if Russia goes ahead with financing the project, it will be the Russian government’s decision to spend the country’s money – it may be possible to try to influence Belarus, Slivyak said.

Some pressure could be applied at the international level, both by the relevant bodies of the Aarhus and Espoo conventions, and through European Union and the US’ political and, possibly, economic sanctions against Belarus, triggered by what was widely decried as a rigged presidential election last December and the general abysmal state of human rights in that former Soviet republic.

Slivyak cites the example of American economic sanctions against Iran, which also by default were to include any country that sought trade or economic relations with Tehran.

The question, then, is what Russia will do if such sanctions are put in place.?

Is Russia ready to invest?

But before Moscow is even in a position to consider such a predicament, Russia may simply not have enough money to pursue construction in Ostrovets.

“Russia is far from overcoming the economic crisis. There are obviously years of stagnation ahead. Meanwhile, Russia is pushing along megalomaniacal projects like the Olympic Games in Sochi and the football championship in 2018. Other projects may come up in the meantime, and where will the money come from?” Slivyak said.

As it is, Russia is hardly coping with its own nuclear reactor construction programme, approved until 2015. According to the Accounts Chamber of the Russian Federation, 60 percent of that construction has been plagued with delays owing to problems with funding, Slivyak said. Russia is simply not in a very beneficial situation right now, he added.

This was indirectly confirmed by the head of the Russian State Nuclear Corporation Rosatom, Sergei Kiriyenko, during his January 11, 2011 meeting with Russian President Dmitry Medvedev. If the Belarusian project is given enough money to go ahead, Rosatom will be the responsible partner on the Russian side, including supplying the experimental reactor design.

“[…] And the most important thing is the contracts for the construction of nuclear power stations. We have a programme for the construction of 28 nuclear power units in Russia, which has been approved. The deadlines had to be moved back because of the economic crisis but none of the projects have been cancelled. The work is in progress at nine sites,” Kiriyenko said, according to a translated transcript available at Kremlin.Ru.

Russia likely plans to build the plant in order to sell excess power supplies abroad to European customers at European prices, Slivyak says, but he doubts that the 50 percent interest that Moscow may decide to pursue in Ostrovets for its own commercial gain is even a priority now.

“The [economic] situation is likely to be getting worse from now on. Projects like these will be the first candidates for postponement – and nobody else will give Belarus money for it,” Slivyak concluded. “I do not see any prospects for realising this project at all in the near future – not until 2020 anyway, under the best-case scenario. And then again, it could just as well cease to exist on its own because of some adverse internal developments in Belarus.”