The Swedish approach to nuclear energy

STOCKHOLM – Sweden’s Social Democrats are against building new nuclear power reactors – the country already runs nine reactors at three plant – but the party also leery of risking the position of their industry on the world market, Sweden’s deputy head of the parliamentary committee for foreign affairs said this week.

Published on April 30, 2009 by Anna Kireeva, translated by Charles Digges 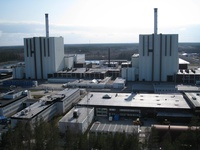 Sweden’s position is a remarkable case. In 1980, the country voted in a nationwide referendum close down the country’s nuclear power plants over the next 30 years. Now, three decades later, no one has any plans to follow through with that referendum. Many have said that the referendum was simply a recommendation in spirit, and the country’s government is saying that there are no alternatives to nuclear power to assure the country’s energy supply.

“This is a very sensitive sphere,” said Urban Ahlin, the deputy chief of the parliarmentary committee during a meeting with Russian journalists as part of a seminar put together by Sweden’s bureau for radiation safety. According to Ahlin, the Social Democrats opposed the government’s decision to build new reactors in the country.

“It is premature to talk about building new (nuclear) plants,” he said, adding that with Sweden’s current hydro-electic and nuclear plants “we can accommodate our industry with cheap electricity,” he said.  “

We are for searching out other alternative sources of energy for substitute for nuclear power and if we find them we will use the – but we will not risk the position of hour industry on the world market.

Swedish-Russian cooperation
Ahlin said that Sweden supports a radiation and nuclear safety programme, improvements to waste storage methods and dealing with spent nuclear fuel. “We are glad that (Russian Prime Minister Vladimir) Putin and (Russian President Dmitry) Medvedev are beginning to talk about the safety of nuclear technology and to renew discussions on strategic weapons reductions.”

He said that the world financial crisis caused apprehension as nations will be able to devote less of nuclear safety. “It would be good if the Swedish Government could spend more money on these goals,” he said.

The Russian-Swedish nuclear safety cooperation programme is probably on of the most fruitful and only brings hope that even better things are to come. Ahlin expressed the worry that Russia mioght not want to cooperate with Sweden because Sweden does not buy Russian gas and is not dependent on it for energy needs like much of Europe. “If you follow Putin’s travels, you will notice he practically does not visit any countries that don’t buy Russian gas,” said Ahlin.

In speaking of fossile fuels, Ahlin expressed confidence that in the current world situation, countries mush diversify their economics, wean themselves off oil, and put their profits from the oil and gas industry into the development of renewable energy and energy efficiency.