Belarus, Lithuania, and a nuclear power plant in search of a solution

GRODNO REGION, Belarus – Debates are still ongoing on the issue of possible construction of a nuclear power plant in Belarus. The suggested site is in the Ostrovets District in the Grodno Region – or just some fifty kilometres away from neighbouring Lithuania’s capital of Vilnius. Bellona’s regular contributor Andrei Ozharovsky offers a comment on the developing project and the public sentiment it is causing.

Published on March 15, 2009 by Andrey Ozharovsky, translated by Maria Kaminskaya

Lithuania is worried, Belarus’ Foreign Affairs Ministry is circling the wagons, and Ostrovets residents keep collecting signatures for a petition to stop the project. All the while, the Belarusian KGB – still very much alive in this former Soviet republic, which bore the brunt of the nuclear fallout from the 1986 Chernobyl disaster – is calling activists in for questioning, and the propaganda machine of the country’s nuclear establishment is painting anti-nuclear protesters as members of sex minorities, quite a stigma in a country viewed widely as one of the Eastern European states with the worst human rights record.

The site for future Chernobyl-2?
Initially, several sites were proposed to host the envisioned nuclear power plant (NPP). The choice was between the regions surrounding such Belarusian cities as Mogilyov, Vitebsk, and Grodno.

Last January, reports appeared in Belarus’ official media outlets that the choice had finally been made. The NPP is supposed to be built near the village of Mikhalishki in the Ostrovets District of the Grodno Region. However, as activists with an organisation called The Anti-Nuclear Campaign of Belarus found out, no final decision had actually been settled upon: There was only a recommendation made by a certain unidentified commission, and making a formal decision to place a new nuclear power plant at a particular site is a prerogative afforded only the president of the country. 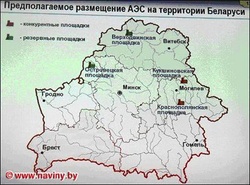 As arguments against the NPP, the statement lists the threat of an accident or a disaster prompted by an operational failure at the plant, a possible increase in cancer incidence caused by so-called “sanctioned” radiation discharges that a nuclear power plant releases even in the course of routine operation (please see a report on this subject here), the risk of another violent earthquake of the scale of the 1909 disaster (the 7.0 magnitude quake of 1909 was the strongest ever recorded in Belarus), and the dominant western winds, which would carry the radioactive fallout all over the country should an accident in fact take place.

The signature campaign and the vigorous anti-NPP activities in Ostrovets are something that is really putting the authorities on the spot: Official claims that Belarusians have long put Chernobyl behind them, made peace with the tragedy, and are in full support of the construction of a dangerous energy site sound anything but credible.

The open statement is addressed to President Lukashenko, Prime Minister Sergei Sidorsky, European Union member countries, and a range of media outlets. A reaction has yet to come from the Belarusian government, but Lithuania has already stated it is bothered with the prospect of the new NPP operating in close proximity to its capital city.

Vilnius only within a 50-kilometre shot from a nuclear power plant
Lithuania’s Foreign Affairs Minister Vigaudas Ushatskas was one of the top-ranking Lithuanian officials who have recently voiced concerns over the new nuclear power plant’s placement so close to the Belarusian-Lithuanian border. Ushatskas proposed that the European Union create a special commission to look into the project’s safety issues and its potential detriment to the environment.

Belarus is trying its best to placate its neighbour. Minsk’s official media have recently quoted the Belarusian Foreign Ministry’s press secretary Andrei Popov as saying: “Lithuania can rest assured that the construction of the future Belarusian NPP will be conducted in full agreement with international obligations.”

It is, however, a plain fact of today’s reality that contingencies and catastrophic explosions occur at nuclear power plants in spite of what various international obligations or national legislation may have to say on the subject; the Belarusian Foreign Ministry’s promises to ensure the opposite could hardly appease the very understandable concerns on the part of Lithuania.

On January 21st, the Environment Committee of the Lithuanian Parliament, the Seimas, held a meeting to discuss, among other items on the agenda, the issues associated with Belarus’ plans to build its new nuclear power plant near the Lithuanian border. After brief reports by representatives of the Foreign Ministry and the Ministry of the Environment, Belarusian ecologist Yuras Meleshkevich – an envoy sent by Ostrovets residents to speak at the meeting – distributed copies of the open statement protesting the construction, complete with the 270 signatures that activists had by then collected in the district.

A press release published by The Anti-Nuclear Campaign of Belarus said at the time: “Residents of the Ostrovets District are voicing their objection that the decision-making on the placement of the new plant has been carried out without their participation. They are continuing to collect signatures to defend their right to a favourable environment.”

“The local population in the Ostrovets District is very worried about the choice of site for the NPP construction, as this is an area of rich and beautiful nature, which attracts people for open-air pastime and recreation,” said Meleshkevich as he handed copies of the Ostrovets statement to the Seimas members.

The statement said, in particular: “We are appealing to all citizens of the Republic of Belarus and to the European community with one request – to stop the implementation of the ‘Ostrovets NPP’ project.”

After the statement had been presented, Environment Committee chair Jonas Siměnas said: “The information we have received from our Belarusian colleagues warrants careful examination. We will analyse the materials at hand and review this issue.”

How viable is the project anyway?
Earlier official reports pegged the start of the construction at 2009. The first reactor block of the new NPP is projected to begin operation in 2016, and the next one in 2018. Even if the assumption that the choice has in fact been made to place the plant in Ostrovets is true – there is, as yet, no confirmation from President Lukashenko, which means that the decision still awaits formal approval – one complication remains that Belarus, for now, lacks fundamental components that a project of this scale requires.

The government has yet to select an equipment supplier or even to announce a tender or any alternative procedure to choose one. The state is likewise hard-pressed to secure enough funds to finance construction works. The costs of building a nuclear power plant of a capacity of around 2 gigawatts may set the country’s budget back by as much as €5  billion to EUR €6 billion, which is no small amount.

Of course, there is always the expectation that the new NPP will be another “present” to Belarus from Russia – which may simply build the plant for its neighbour and append the construction costs to the already gigantic debt sheet run up by the Belarusian government. One should hope, however, that at the time of a raging financial and economic crisis, Russia will refrain from making such an expensive and, essentially, perilous gift.