With climate goals clearly spelled out, Obama has yet to address the role of nuclear power

During Barack Obama’s campaign, and through last week when he made a post-victory renewal of his ambitious climate goals to a California conference, the US President-elect has received international accolades for his promises to bring US emissions policies into line with international goals and 21st century imperatives.

Published on November 24, 2008 by Charles Digges 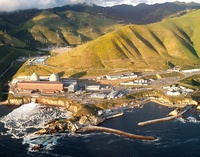 "I will set a clear goal as president," he said in his speech accepting the Democratic nomination. "I will tap our natural-gas reserves, invest in clean coal technology and find ways to safely harness nuclear power."

He has also promised to back biofuels and wind, water and solar power by investing in them to the tune of $15 billion a year. The crowd is still going wild.

The goals are, indeed, lofty, and something America is not used to hearing – any more than the international community is used to hearing such conciliatory intonations from America after eight years of Washington sticking its head in the sand over the climate change issue.

But a question on the minds of many surrounding the transition between the administration of George Bush and Obama, and the ramifications it will have for energy policy and the environment,  is whether Obama will accomplish these goals without being tempted by nuclear power and its industry-touted zero emissions power production.

Obama for the moment – according to members of his transition team interviewed by Bellona Web on the condition of anonymity –  is taking a wait-and-see approach that will be based on what kinds of technologies emerge to store spent nuclear fuel safely and permanently.

This, they acknowledge, is not a solution that is around the corner by any means, but is one that will likely dictate that the Obama administration will take a slow approach in evaluating what the nuclear industry likes to express as a necessity that America engage in a vigorous nuclear build.

Obama is vehemently opposed to using Yucca Mountain as a repository for America’s nuclear waste. First, the programme is 10 years behind schedule, and billions of dollars over budget, and reports on the soundness of the facility are a source of nearly daily debate in newspapers in Nevada, where the Yucca site is located. Secondly, all the berths at Yucca are already reserved, and even if they were filled tomorrow, another waste storage site would have to begin construction immediately.

Yet deep geologic nuclear waste storage is regarded by the scientific community as the nearest method to a surefire way to secure nuclear waste safely for thousands of years, and the process of building such a facility is – as new a technology – bound to progress in fits and starts.

"The best option is deep geologic isolation,” said Per Peterson, a University of California at Berkeley professor who specialises in nuclear waste management. “It’s based on 50 years of research and development, and a very broad, widespread and strong consensus that it can provide appropriate and safe disposal of waste."

Yucca has also been a lighting rod for partisan warfare, with Bush Administration officials backing it, and opposition to it among democrats emerging as early as the Democratic primaries. Both Hillary Clinton and Obama came out early with their respective damnation of the colossal effort.
[picture1 left] Yet, all of this begs the question: Is Obama’s rejection of Yucca based more on the imperfect, but evolving, science behind such a project – or does it boil down to hard-core partisan politics? After all, while Obama has set concrete goals and the monetary figures his government will spend on renewable energy and climate change policy, he has not come forth with promises of funding research alternatives to the Yucca Mountain site, or shelving the United States’ hellbent drive to fund more nuclear power plants.

The United States’ Nuclear Regulatory Commission (NRC) is reviewing applications for 26 new nuclear power plants in the United States, according to a spokesman. And while Obama agrees that nuclear waste storage is a critical question, he has not spoken out explicitly against what is shaping up to be a multi-billion dollar nuclear build.

Yet, no country in the world has effectively addressed on an industrial scale the problem of safely storing radioactive waste and spent nuclear fuel. So, if Obama is ill at ease over signing off on a nuclear build in the United States, that is the reason, say transition team members who are close to the President-elect’s dark nights of the soul over nuclear power.

As it stands, US commercial reactors currently provide some 20 percent of the country’s energy, according to the US Energy Department (DOE), as well as for 70 percent of its greenhouse gas-free energy production.

"We cannot get to the reduction of CO2 in a big way without relying on nuclear energy even more than we do today," Mujid Kazimi, the director of MIT’s Centre for Advanced Nuclear Systems told Newsweek Magazine – in a position that Bellona does not share.

As described in Bellona’s position paper against using nuclear energy as an effort to combat climate change, prospective nuclear power plants would come on line far too late in the game to do any good in combating the climate gasses that will have been released in the 10-20 years it would take to build the them – even if the problem of storing their waste were somehow solved tomorrow.

But, will Obama take the poisoned bait that nuclear is the way out of the current global climate crisis being dangled by the nuclear industry?

Not likely, as indicated by an appearance in May on Meet the Press, one of America’s foremost TV news magazines, putting politicians and news-makers face to face in an unfiltered exchange with the press.

When asked on the programme whether he would include nuclear in America’s energy mix, Obama – then still on the campaign trail – shored up his comments with cautious diplomacy, but certainly did not issue a ringing endorsement of nuclear power as the country’s saving grace.

"I think we do have to look at nuclear, and what we’ve got to figure out is: Can we store the material properly? Can we make sure that they’re secure? Can we deal with the expense?" he said, according to the transcript of the interview.

Obama’s lack of enthusiasm is easy to understand politically, especially given the apprehension many Americans have about the safety of nuclear power plants. Three decades later, Three Mile Island still looms in America’s collective memory as the big near miss—despite the pleas of industry advocates who say the technology has improved to the point that accidents are almost unheard of.

But Three Mile Island is only a US-based example. The granddaddy of all nuclear power disasters was obviously Chernobyl – which, though cloaked by Soviet era secrecy and seen as a failure of the Kremlin, still boiled down to simple human error and too much faith in the engineering of what was thought at the time to be a cutting edge reactor.

And this is only one example of lethal nuclear carelessness in a country that has pursued the nuclear power option at the near total exclusion of cleaner, safer and readily available energy technologies because of the Kremlin-supported conceit that its nuclear wizards are capable of sorcery.

So far, however, that legerdemain has been memorialised most indelibly in a history of disaster and ongoing radioactive contamination.

The most serious nuclear accident in the world prior to 1986 – which provided a dry run for Chernobyl – was the so-called Kyshtym disaster of 1957, during which a nuclear waste storage tank at Russia’s Mayak Chemical Combine exploded, effecting 270,000 people in the Chelyabinsk, Sverdlovsk and Tyumen regions. The areas are still contaminated by the fallout.

Yet, the United States operates 104 nuclear power plants that have not suffered any major mishaps – at least on the scale of Three Mile Island – that have led to major leaks of radioactive materials. US proponents of nuclear power point to France, 80 percent of whose energy is nuclear, as an example. But safety breaches that have recently blemished France’s supposedly pristine record throw cold water on that example.

At present, US spent nuclear fuel is stored mainly on site at the nuclear facilities that produce it. Obama advocates continuing this practice under secure conditions until international research – most notably from Sweden, which has conducted the most detailed studies to date – has paved the way to deep geologic repositories.

"I believe a better short-term solution is to store nuclear waste on-site at the reactors where it is produced, until we find a safe, long-term solution that is based on sound science," Obama wrote in an op-ed piece in the Las Vegas Sun, which, as an expression of his opposition to Yucca, played no small part in helping him carry Nevada in the election.

Implicit in Obama’s policy of waiting for more research before committing to solutions that are possibly as politically and scientifically shoddy as Yucca Mountain, is that it eschews Bush Administration notions, forwarded mostly by Vice-President Dick Cheney and certain circles in the DOE, that America lift its moratorium on reprocessing spent nuclear fuel.

But, while politicians squabble over whether to reprocess or store the waste – relying heavily on the “not in my backyard" argument – the waste continues to pile up on site. Ironically, this point of view was articulated by Obama’s presidential challenger, John McCain, who, though an ardent supporter of Yucca, promised his constituents in Arizona  that no nuclear waste would be trucked through the state en route to the nuclear waste storage facility.

For the Obama team, an answer for dealing with this dilemma cannot come fast enough. US nuclear waste is stockpiled at plants, submerged in water for as long as five years and then sealed in concrete casks – hardly an ideal state of affairs.

As Rochelle Becker of the Alliance for Nuclear Responsibility, a nonprofit that monitors the US nuclear-power industry, put it: "In California, (spent nuclear fuel) is stored next to earthquake faults. In the rest of the country, you find that most waste is sitting very close to water supplies."

The conundrum of electing to leave waste at nuclear power plant sites, or sending it on to the untested, decade-late and questionably secure Yucca site will provide Obama with the opportunity to take a leadership role in combating nuclear waste not only in the United States, but on the international stage as well, said members of his transition team, and the prominent Russian environmentalist, Alexei Yablokov, president of the Moscow-based Centre For Environmental Policy.

“A number of countries are pursuing geologic repository technology, but they are hurrying and the science may not work. Just look at the billion dollar mistakes at Yucca Mountain” said Yablokov in an interview with Bellona Web. “If the United States takes a lead role in this, it can become a centre of exchange of just such information.”

Putting the United States at the fulcrum of helping to solve this issue is something Obama energy strategists are hoping will be a hallmark of his presidency, vague as the plans admittedly are at the moment.

“If we can have a hand in this, then it will be one more change for the better that the world is looking to this administration to bring about,” said one of the strategists in an email interview.

So far, however, the basic plan of the incoming administration seems to be to hope a good solution today turns into a better solution tomorrow – to say nothing of 10,000 years from now.