Vis menyen
Bellona.org > Latest News > Nuclear issues > Accidents and incidents > Inspections of a reactor at Sweden’s Forsmark nuclear plant reveal that a quarter of its control rods are cracked

Sweden’s Vatenfall said that an inspection carried out on all control rods at its Forsmark 3 reactor revealed that 25 percent of the 197 control rods it inspected appeared to be cracked. Control rods are an essential element in controlling nuclear reaction in reactors.

Published on November 14, 2008 by Charles Digges 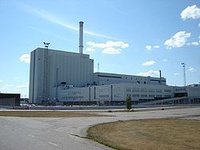 The discovery of the cracks was occasioned by an identical discovery at Sweden’s Oskarshamn nuclear power plant, which late last month detected that 90 control rods in one of its reactors – which is identical in design to Forsmark 3 – revealed cracks.

This led to the shut down and subsequent inspection of the control rods at the Forsmark facility – which revealed identical problems.

Both the Oskarshamn plant and the Forsmark plant are located on Sweden’s east coast on the Baltic Sea.

“The control rod is something like the nuclear reactor’s gas pedal,” said SSM spokesman Adreas Bredfall.

Vatenfall said Friday that the control rods at Forsmark that passed visual inspection will now undergo electronic testing to ensure that they are not damaged. The reactor is not expected to restart until December, company officials said.

About half of Sweden’s energy is accounted for by its three nuclear power plants.

A spokesman for Forsmark told World Nuclear News that among the many options being studied to enable Forsmark 3 to be restarted was the replacement of the unit’s damaged control rods with those from the shutdown Units 1 and 2 at the Barseback plant, which are of a similar design.

However, he said much work needed to be done into the technicalities and feasibility of this option.

In September, the SSM issues a criticism of the Forsmark plant for devoting insufficient attention to safety issues. During an inspection on August 8th, it was revealed that the emergency cooling ventilation system for the plant’s No. 2 reactor has been clogged for a year – exactly a year after an inspection revealed the same problem.

The emergency cooling system is designed only to work in emergencies. If any cooling issues had arisen during the past year, while the vent system was blocked, it could have lead to a very serious accident, or even a full-scale catastrophe.

“We consider it very serious that Forsmark is not following its own safety procedures,” Bredfall said. “ We want to understand how such a thing could have occurred. This is a question of safety culture.

A representative of the Forsmark plant said the vent blockage was an “isolated incident.”

Forsmark had already been under special observation for several incidents and serious events that occurred on June 25th 2006.

The plant’s No. 1 reactor was shut down after it was discovered that two of the five generators backing up its emergency cooling system were out of order. Many experts said that a catastrophic fusion in the reactors active zone was avoided only as a result of this chance discovery.

“The problem of Sweden’s nuclear power plants appears to be an endless story said Per Hegelund of the The Swedish Environmental Movement’s Nuclear Waste Secretariat. “All else aside, the Oskarshamn and Forsmark are contaminating the Baltic Sea with usual dumps and emissions of radionuclides. Such things are a safe and clean source of energy don’t exist.”

The Oskrashamn facility made news earlier this year, in May, when two contract workers were detained when it was discovered during a random check that one of the workers’ bags contained traces of explosive material. The men were questioned by Swedish police and released.