Published on February 26, 2007 by Galina Raguzina 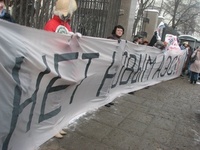 The anti-nuclear movement in Russia, furthermore, seems to be gaining traction with government and nuclear brass as, even prior to the protest, Russia’s nuclear utility announced it was scaling back plans to build more nuclear power plants.

The protestors, who came from all over Russia, unfurled a 15-meter banner reading “No to the new NPP” (Nuclear Power Plant), and carried placards emblazoned with “Murmansk against Kola NPP-2,” “Floating NPP = Death for Archangelsk,” “No to Chernobyl on the Baikal,” and “Kaliningrad against the NPP.”

In each instance, the placards referred to brewing controversies or ongoing disputes surrounding various planned nuclear projects around Russia: the tug of war over building a second nuclear power plant on the Kola peninsula, the controversy surrounding Rosatom’s plans to build floating nuclear reactors, imports of radioactive waste to the area surrounding lake Baikal, and the heated debate about constructing a nuclear power plant in the Russian enclave of Kaliningrad.

Environmentalists in attendance asserted that last Monday’s demonstration was just the first of many that will take place nationwide.

In March, the Russian government will review the so-called “NPP Road Map,” which is the title of its plan for the construction of new reactors over the next 10 years.

A nationwide protest is already planned for March 1st. Fifteen to 20 regions in which the government is planning to build new nuclear power plants will take part in the protest. Activists hope that the protest will prevent their home regions from becoming a stop on the “Road Map.”

“There is no debate about the issues of the dangers of nuclear reactors – a safe reactor is a dismantled reactor,” said Vladimir Slivyak, co-chair of the environmental group Ecodefense!

“We are against nuclear energy and support citizens groups from Russia’s various regions that are demanding that government abandon its plans for the construction of these dangerous nuclear sites,” he said.

According to Slivyak, “nuclear plants are expensive and dangerous and produce a lot of waste, for which completely adequate means of storage and disposal have not yet been developed.”

According to Ecodefence! the nuclear power industry and the regional governments are currently lobbying for the inclusion of Nizhny Novogorod, Perm, Yaroslavl and Kurgan in the Road Map. 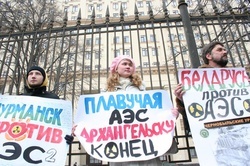 
Second Kola NPP unprofitable
"We thoroughly discussed the possibility of constructing a second reactor at the Kola NPP. However, for now, we have come to the conclusion that it would not be profitable,” he said.

Vitalii Servetnik, chairman of the NGO Nature and Youth (PiM in its Russian abreviation) said in an interview that the nuclear industry was finally getting the message that it was a money pit.

In 2006, PiM and Ecodefence! protested against the construction of the Kola NPP 2 project numerous times, and at the public hearings organized by environmentalists in the Kola Peninsual towns of Apatity, Olenegorsk, Monchegorsk and Kandalaksh last December, the majority of those attending were against developing nuclear energy and decisively in favor of developing and using wind power.

At the end of 2006, Kirienko announced that the Southern Urals NPP (SUNPP) project – construction of which was suspended 15 years ago – can not be built in the previously designated location because project plans have changed. The Chelyabinsk Region government in the Southern Urals, however, is insisting that the plant be built at the originally planned site. The situation is at a standstill for now.

Now instead of fast neutron reactors (FSN), they are planning to build VVER-1000 series water-cooled reactors. This means for starters that the very foundation of the plant was designed for different equipment.Secondly – an most importantly – there is a lack of water resources at the construction site of the VVER-1000 reactors which need copious water supplies for their cooling systems.

She said it was “obvious” that the issue is currently deadlocked and that it is uncertain whether the involved parties will come to any agreement, casting doubt on whether the NPP will be built in Chelyabisnk at all.

“We pointed out that there are major problems with the Southern Urals project as well as pointed out the unprofitability of the Kola NPP 2 project. These are examples for the others. It’s time to get active. If a third example materializes, then it will already be difficult to say that it’s just a coincidence.”