MURMANSK– Ruslan Tischenko, a former official from Murmansk’s division of Russia’s federal environmental watchdog, pleaded guilty in court today of accepting bribes from one of the Kola Peninsula’s most polluting industries, the Kola Mining and Metallurgy Company. 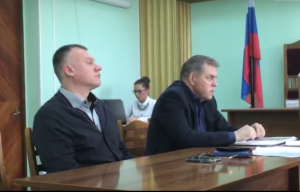 MURMANSK– Ruslan Tischenko, a former official from Murmansk’s division of Russia’s federal environmental watchdog, pleaded guilty in court today of accepting bribes from one of the Kola Peninsula’s most polluting industries, the Kola Mining and Metallurgy Company.

The KMMC has long been at flashpoint of controversy for polluting not just the Kola Peninsula with toxic sulfur dioxide, but neighboring northern Norway, Sweden and Finland as well.

Much of Norway’s inability to negotiate with Russia over this problem stems from the insistence of Russia’s environmental watchdog, Rosprirodnadzor’s failure to adequately and scientifically establish the problem.

Because the official was said by prosecutors to be a cooperative witness, what comes next in the trial could bring down a cascade of corruption indictments against KMMC management and federal environmental officials.

The KMMC is a daughter company of Norilsk Nickel, a Russian industrial giant that provides a third of the world’s nickel supply.

Recently, mid-level politicians in Norway have appealed to Oslo to enforce travel bans to Europe for Norilsk Nickel’s majority shareholder, oligarch Vladimir Potantin, until he brings the Kola plants into accord with contemporary environmental standards.

At today’s hearing, both Tischenko and his lawyer objected to press being present in the gallery, but the judge allowed journalists for the hearing’s public portion.

In this instance, Tishenko was arrested in December 2014 while in the act of receiving a bribe totaling 1,229,000 rubles ($19,000) from an unnamed official with the City Center for Expert Evaluation.

In return, he assured the company quick acceptance by Rosprirodnadzor of its documents on reissuing a license to a third company, Apatit, a Murmansk area mining and processing company, to store various classes of dangerous waste.

Relative to the KMMC, Tischenko said he was guilty of accepting more than 6 million rubles ($92,000) from another unknown person within the management of the company to assure its relicensing for decontamination and storage of various classes of toxic waste and for confirming the company was spewing pollution within limits regulated by the Russian government. 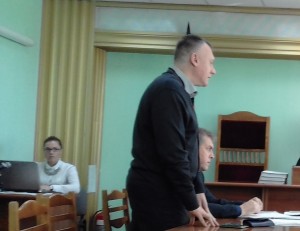 Ruslan Tischenko saying in court he is guilty on all counts. (Photo: Anna Kireeva)

At today’s hearing, prosecutors charged that Tischenko had brought to light “violations of current legislation” that ran afoul of established norms and limits for pollution established for the KMMC.

The charges further read that he willfully devised to flout these norms by receiving bribes, and in return relicense the facility despite its polluting record.

After the reading of the charges, Tischenko rose and told the court that, “I confess my guilt in both episodes fully.”

For its part, the KMMC, which could also be facing legal proceedings in a separate hearing, maintained through its press office that it considers the currents case to be a “misunderstanding,”

“The company will not comment on the investigation or the court proceedings. We are certain that this is a misunderstanding, and the company has no ties to the proceedings,” the KMMC’s press service told Bellona today.

To this point, and to the fury of many local and Norwegian environmentalists, the KMMC has paid a total of 25,000 rubles ($382) for exceeding the norms of sulfur dioxide concentrations it is allowed by current pollution mandates.

According to the prosecutor, a plea-bargain has been reached with Tischenko, and he has cooperated with the investigation, including giving detailed information during interrogation, and has supplied information on those he colluded with.

“Information from the investigation has facilitated the bringing of criminal charges regarding other persons of interest in corrupt activities,” said the prosecutor at today’s hearing. “[Tischenko] has also given up the funding her received in bribes.”

At this, the public session the press was allowed to attend ended. The judge assessed the remaining portion of the hearing, because of its relation to the specifics of the investigation, closed.

The next hearing is scheduled for the beginning of next month.

Bellona will continue to follow details of the case.