Published on January 26, 2015 by Bellona Europa 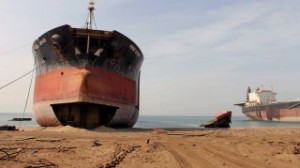 Bellona has worked for years to stop Norwegian ship owners from conducting so-called “beaching”, that is sending ships to irresponsible scrapping on beaches in Bangladesh, Pakistan and India. New figures for 2014 show that there has been progress. 21 Norwegian ships were scrapped on Asian beaches in 2013 compared to only six last year. Instead of unhealthy and environmentally harmful manual scrapping on beaches, Norwegian ship owners are now selecting shipyards in China, Turkey and Denmark. Nevertheless five Norwegian companies still beached ships in Alang in India in 2014:

Norwegian Shipowners’ Association should be clearer

NSA has dissuaded its members from scrapping ships in Bangladesh. Bellona Adviser Sigurd Enge sees no reason why they should not extend this to also apply to India and Pakistan.

– “Beaching” of ships is indefensible both for health and the environmental reasons. The working conditions sm and environmental damage is obvious and there is currently no difference to this job in India than in Bangladesh, says Enge.

He thinks it is a pity that the NSA recommendations aren’e clearer.

– We would like to see the NSA set clearer guidelines here. Instead we see individual ship owners taking responsibility to avoid sending their ships for beach scrapping, said Enge.

A new Indian study of conditions at scrapping companies in Alang show that around 470 workers have died in accidents at this area’s shipbreaking sites since 1984. During the same period there were a reported 400 fires.

Last year alone 23 workers died on beaches in India, Pakistan and Bangladesh. 66 were seriously injured after falling from great heights, explosions and fires. Many workers have also been crushed under falling steel plates.

The 35,000 un-unionized workers live in shacks on-site, and most lack water, electricity, toilets, drainage and sanitary facilities. Children do not have access to education. The report says that the employer has set up 12 showers and six toilets that 35,000 people will share. Neither is maintained.

Moreover, the ships contain toxic waste such as asbestos, heavy metals, PCBs, oil residues and organic waste. It’s impossible to store or remove this waste safely on a beach where the tide is constantly washing in.

Here’s where ships are broken up:

The picture in the article is taken from NGO Ship Breaking Platform – of which Bellona is a member.

Read the press release of the Ship Breaking Platform here

For more information, contact Bellona’s expert on the topic: