The first to fall sick were the surfers. 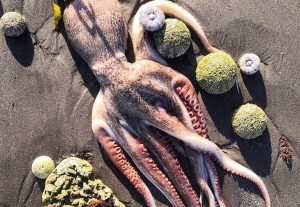 The first to fall sick were the surfers.

Other surfers began to report the same symptoms, complaining that the water was foul smelling and had changed color, with a milky foam floating on its surface.

Then came the dead sea animals. The corpses of octopuses, large fish, seals, sea urchins, and crabs were washing up on the shore of Khalaktyrsky beach. The surfers posted the  photos and they went viral.

They weren’t the only ones. Social media posts and videos started popping up from everywhere along the distant Pacific Coast seven time zones to Moscow’s east showing mounting piles of dead sea creatures. In the meantime, the water got worse, becoming muddy-colored and thick.

Now, a month later, there still aren’t any good answers about what’s behind an ecological catastrophe that has killed fully 95 percent of marine life along the local seabed and sickened many who have been in the water.

Some fear the cause could be a leak from one of the many ships that pass by the far eastern peninsula seven time zones to Moscow’s east. Other theories suggest that the deadly stew brewing off Kamchatka’s shores has been caused by pesticides or a rupture in the bunkers of old rocket fuel that are found in the area.

Environmental officials in Moscow, however, have been quick to dismiss a manmade origin to the mass die-off, suggesting that reports of disaster are overblown.

“There’s no catastrophe. No one has died or been injured,” said Russian Environmental Minister Dmitry Kobylkin in an interview on October 5. The same day, according to Radio Free Europe, Kamchatka’s Health Ministry reported that at least eight people had received medical attention after coming in contact with the seawater.

Meanwhile, an expedition team of scientists from the Kronotsky Nature Reserve, the Kamchatka Research Institute of Fisheries and Oceanography and the Kamchatka branch of the Pacific Institute of Geography took water samples and surveyed the area.

The scientists found almost all of the marine life along the seabed in Avancha Bay had been killed, according to an account by researcher Ivan Usatov.

“When diving, we found that at depths from 10 to 15 meters…95 percent are dead. Some large fish, shrimps, crabs have survived, but in very small quantities,” he said, according to the website of the regional governor, Vladimir Solodov.

Russia’s emergency services ministry is investigating the waters amid speculation that the cause of the contamination came from two nearby military test sites where old rocket fuel is stored, though Governor Solodov has rejected that notion.

The Russian branch of the World Wildlife Fund for Nature WWF said the death of animals suggested both a surface contamination of the ocean and the release of a chemical that had diluted in the water.

Greenpeace Russia’s climate project leader, Vasily Yablokov, said he believed that a pollutant, not only on the surface but also in the water, is moving along the coast. He told The Moscow Times that tests showed petroleum levels were four times higher than usual and phenol levels were 2.5 times higher.

“We saw foam on the ocean, and a strange film on the Nalycheva River,” he said in an interview with Radio Free Europe. “Weather permitting we’ll continue gathering samples and send those we already have to Moscow, as soon as possible, so they can shed light on what happened here.”

Vladimir Burkanov, a biologist specializing in seals, in a comment published by the Novaya Gazeta opposition newspaper, suggested  the old stores of rocket fuel kept a test site called Radygino could have rusted, allowing the fuel to leak into streams. The site was used for drills in August and is located only 10 kilometers from the sea.

According to Dmitry Lisitsyna of Ecowatch Sakhalin, some 300 tons of rocket fuel is stored at Radygino.  He added that symptoms like Morozov and other surfers experienced were consistent with exposure to rocket fuel.

Another military site, called Kozelsky, has been used to bury toxic chemicals and pesticides, according to the governor’s website.

The apparent accident in Kamchatka is only the most recent environmental mishap in some of Russia’s more remote regions where industrial and military sites have been laid vulnerable to climate change and failing infrastructure. In May, near the northern Siberian city of Norilsk, a fuel tank resting on thawing permafrost collapsed, spilling 20,000 of diesel oil into area waterways and causing a local river to run red.

The Kamchatka peninsula is a popular destination for adventure tourism because of an abundance of wildlife and live volcanoes. The incident came as authorities urged tourists not to visit a live volcano on Kamchatka owing to fears of an imminent eruption.