Officials at a Russian nickel smelting works that released dangerous air pollution into Northern Norway last month have said they are taking measures to prevent similar atmospheric contamination in the future.

Published on February 11, 2019 by Charles Digges

The nickel smelting works in the Russian town of Nikel. Credit: Courtesy of Thomas Nilen of the Independent Barents Observer

Officials at a Russian nickel smelting works that released dangerous air pollution into Northern Norway last month have said they are taking measures to prevent similar atmospheric contamination in the future.

But Russian environmentalists have criticized the plant’s mea culpa to Norway, saying smog containing high levels of sulfur dioxide routinely fouls air on the Russian side of the border without drawing special notice from company authorities.

On January 25, residents of the Svanvik region in Northern Norway near the Russian border were warned by civil defense authorities to stay indoors as pollution in the atmosphere peaked at dangerous levels. The culprit was the Kola Mining and Metallurgy Company – a division of the giant Norilsk Nickel – long a sore spot between Norway and Moscow for its history of releasing dangerous measures of sulfur dioxide, an extremely toxic respiratory irritant.

Norwegian media reacted to the pollution outbreak with rage and Oslo’s environmental minister Ola Elvestuen demanded talks with Moscow to reel in the Kola nickel facilities’ emissions. According to the Norwegian Institute for Air Research, or NILU, the pollution that settled on Northern Norway on January 25 was the worst seen in two years. Russian meteorological officials later confirmed that sulfur dioxide levels emitted that day were 10 times above levels considered safe.

For it’s part, the Kola Mining and Metallurgy Company temporarily halted nickel production in order to bring down the levels of sulfur dioxide wafting over the border. Officials with the plant then issued a press release promising to react more quickly when air quality authorities measure dangerous levels of pollution.

But the back and forth between Norway and Russia’s nickel producing giant is well-worn territory. For four decades, environmentalists on both sides of the border have pleaded with Norilsk Nickel’s operations on the Kola Peninsula to cut their dangerous emissions.

Last year, Norilsk Nickel finally began to respond and pledged to embark on a $17 billion dollar effort to rewrite its history as a major Russian polluter. The stakes for the company are high. Norilsk Nickel, which produces 30 percent of the world’s nickel, makes metals vital for the batteries used in electric cars. But many carmakers, like Tesla and Volvo, refuse to buy products produced by unrepentant polluters. 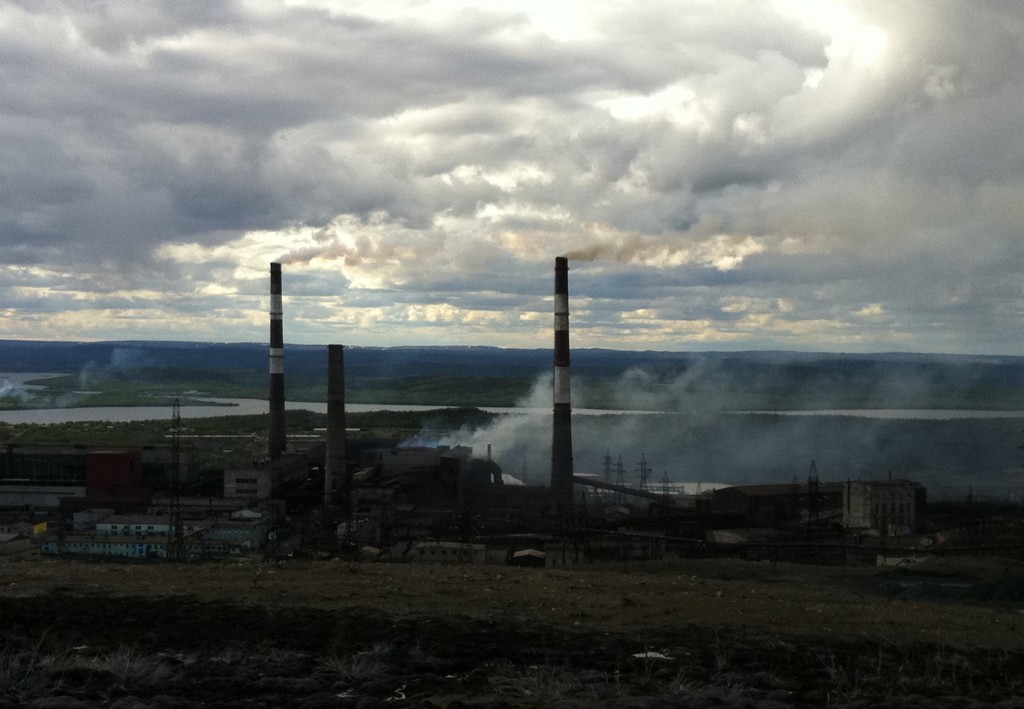 Pollution around the industrial town of Nikel. Credit: Courtesy of Thomas Nilsen

Still, pollution outbreaks like those on January 25 have dogged the corporation’s promised environmental progress. Last April, a spike in sulfur dioxide levels enraged the residents of Monchegorsk, a Russian nickel-working town where some of the Kola Mining and Metallurgy Company’s facilities are housed. The thick polluting smog, aggravated by cold and calm weather conditions, closed schools, packed emergency rooms and caused car accidents on nearby motorways.

It was incidents like these on the Russian side of the border that Andrei Zolotkov, who heads Bellona’s offices in Murmansk, highlighted in response to the Kola nickel facility’s press release. He pointed to Nikel, another town where the Kola Mining and Metallurgy Company operates facilities, which has suffered 18 incidents of high sulfur dioxide levels during the first month of this year.

In some of these cases, said Zoltokov, citing Russian meteorological data, pollution levels in Nikel reached 10 times of what is considered dangerous.

Yet company officials still insist they are making progress. According to company figures, the amount of sulfur dioxide emitted by the Kola facilities in 2017 fell by 9 percent over the previous year. Earlier this year the company said its total sulfur dioxide emissions have dropped 60 percent from what they were in 1998, when pollution was at post-Soviet highs.

Norilsk Nickel has promised that emissions from its northern Siberian facilities will drop by 75 percent over those 1998 levels, and that pollution from its Kola facilities will be reduced by half.

But local pollution incidents along the Russian Norwegian border continue to obscure the advances the company would like to claim.