Russia’s environmental oversight agency has said it will fine a nickel smelting and refining company in Northwest Russia after it produced a smog bank whose dangerous chemical content exceeded national legal limits by eight times.

Published on April 4, 2018 by Charles Digges 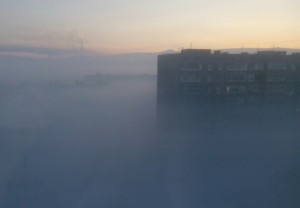 Russia’s environmental oversight agency has said it will fine a nickel smelting and refining company in Northwest Russia after it produced a smog bank whose dangerous chemical content exceeded national legal limits by eight times.

The pollution spike occurred during the first days of March, when bitterly plunging temperatures and a near total lack of wind conspired to park a concentration of toxic sulfur dioxide over Monchegorsk, a company town near Murmansk that is home to the nickel refining works of the Kola Mining and Metallurgy Company, a division of the giant Norilsk Nickel.

The timing of the incident is embarrassing: In recent months Norilsk Nickel has embarked on a highly vocal multi-billion dollar effort to rewrite its history as a major Russian polluter, and has promised a revamping of its production facilities to stem its harmful emissions. The stakes for the company are high. It produces metals vital to the production of batteries for electric cars, but many car makers, like Tesla and Volvo, refuse to buy products produced by unrepentant polluters.

On Monday, Yevgeny Mengalev, an official with Rosprirodnadzor, Russia’s natural resource oversight body, told Bellona by telephone that the Kola company would be fined for the early March bloom in pollution. The fine of between about $850 to $3500 is absurdly small by western standards, but is the maximum provided for under Russian environmental legislation.

According to atmospheric measurements taken from Rosprirodnazor’s stations on the site of the nickel refining works, the level of sulfur dioxide present in the air on March 7 exceeded Russia’s legal limits by eight times. Russia’s federal weather service, Rosgidromet, posted measurements of its own, saying the levels were even higher, reaching nine times the legal limit.

Alexander Tyukin, who is responsible for ecological safety at the Kola Mining and Metallurgy Company, told Bellona last week that the company had done all it could to stem its emissions in the face of the foul weather –a downturn, Rosprirodnazdor said, seen only about once every five years. During the lull in wind and the cratering temperatures, the company ceased nickel refining work for two days. 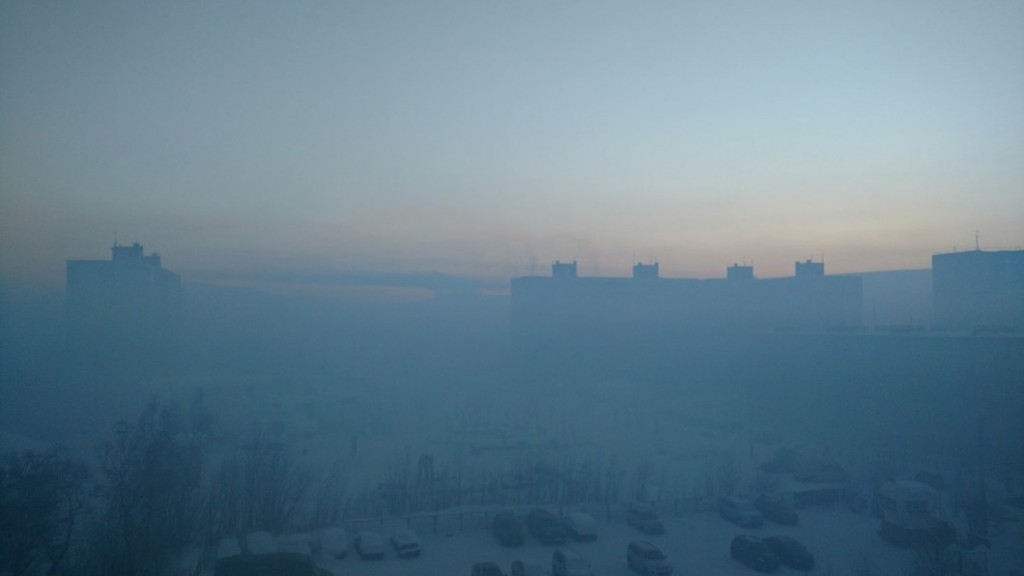 What this meant on the ground in Monchegorsk was dramatic, according to Russian media who reported from the city. In the recounting of Novaya Gazeta, an independent newspaper, the pollution during the early days of March reduced visibility by so much that it caused car accidents on nearby motorways. Trucks from Russia’s Emergency Services Ministry patrolled the smog warning people through loudspeakers to stay home with their windows closed. Local emergency rooms, said the paper, were flooded with people complaining of nausea, vomiting and asthma. Schools were closed until conditions improved.

Residents of Monchegorsk took to social media to register their rage. Some compared the pollution to living near a “crematorium,” complained that the company’s aged facilities were “falling apart” and beseeched authorities to implement new technologies at the refining works to reduce the incidence of toxic smog – plans, the commenters charged, had failed to materialize.

Yet others posting reminded them not to complain too loudly, as everyone in the city of 46,000 in one way or another relies on a paycheck from the Kola Mining and Metallurgy Company. Even the Mayor’s office was reluctant to point fingers, telling Novaya Gazeta that the pollution was coming from central heating boilers, not the refining works.

The company and its parent, Norilsk Nickel, have a history of bristling at perceptions that it is a major polluter. Norway, which is only kilometers down the road, has complained loudly over the years, entreating the Kola facility to reign in the sulfur dioxide emissions streaming from its chimneys.

Yet the company has often been less than receptive to these complaints, sometimes obscuring data about the true level of its emissions, and rubbishing the findings of its European neighbors by disputing who is at fault for producing the pollution.

But lately the company is trying to turn a corner away from that past. Yelena Bezdenezhnikh, the company’s vice president, has claimed Norilsk Nickel was no longer “hiding its head in the sand”about sins past.

In 2016, Norisk Nickel’s CEO, Vladimir Potanin announced he would make some $17 billion available for environmental upgrades company-wide, with some $460 million of that flowing to the company’s Kola Peninsula facilities. The company closed a septuagenarian smelting works near its headquarters in Norilsk, and is talking up its coming transition to best available technologies across the board.

Overall, Potanin has pledged to stem Norilsk Nickel’s emissions by 75 percent over 2015 levels by 2023, with a corresponding drop from the chimneys of its Kola facilities by 50 percent by the same year. A sea change seems to be afoot, as in 2016 the Kola facilities posted a 20 percent drop in its sulfur dioxide pollution – down to 119,700 tons from 154,900 tons in 2015.

Despite these commendable drops, however, the company has yet to publicize what precise modernizations it intends to undertake at its Kola Peninsula facilities. While Bellona is hopeful these measures will be many and effective, it remains impossible to judge the company’s good intentions without a more precise roadmap of what those intentions are and how they will be implemented.

Judging by their outcry on social media in the wake of last month’s pollution crisis, the company’s employees in Monchegorsk would like to know those plans as well.