Norway’s Minister of Climate and Environment said that his Russian counterpart has promised to apply new technologies to a notoriously polluting plant that’s been a sore spot in relations between the countries since the Soviet Union’s fall.

Published on December 1, 2016 by Charles Digges

Norway’s Minister of Climate and Environment said that his Russian counterpart has promised to apply new technologies to a notoriously polluting plant that’s been a sore spot in relations between the countries since the Soviet Union’s fall.

Norway’s Vidar Helgesen this week told the Barents Observer news portal that Sergei Donskoi, Russia’s environmental minister, will use the Kola Mining and Metallurgy Company on the Kola Peninsula as a pilot project for applying best available technology, or BAT.

For decades, the KMMC – a daughter company of the giant Norilsk Nickel – has released some 100,000 tons of the heavy metal sulfur dioxide into the atmosphere above Northwest Russia and Northern Norway, a subject Russia has strenuously, and often dubiously, disputed in the past.

“The Kola Mining and Metallurgical Company is among the 300 most polluting companies in Russia that will be pilots for introduction of BAT, Helgesen said Tuesday after dinner with Donskoi, the Barents Observer reported. “They have now been ordered to have a plan for this ready by 2019.” 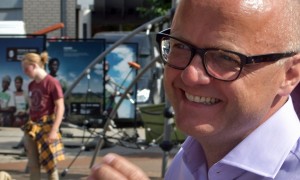 The application of the best technology to the persistent international headache is the latest in a series of encouraging but unspecific promises about future pollution controls on the KMMC, which is arrayed throughout three industrial cities on the Kola Peninsula.

The company earlier this month told Bellona in an interview that it would reduce its sulfur dioxide emissions by as much as half by 2019. That’s part of a plan under which Norilsk Nickel in the Northern Siberia will reduce its emissions by 75 percent by 2020 as part of a $1.7 billion contract with Canada’s SNC-Lavalin, an engineering and construction company.

Yet, while emissions have fallen from the KMMC’s retrofitted plant in the city of Zapolyarny, they have risen in its town of Nikel, which is close to Norway, Helgesen said.

Before the retrofit, which was five years in the making, became operational, part of the sulfur in nickel ore was emitted as sulfur dioxide. Now, this sulfur stays put until it’s smelted in Nikel, the Barents Observer reported. As a consequence, emissions from that industrial town are higher than even before Zapolyarny’s retrofit.

The smelting operations in Nikel are considered the biggest environmental hazard to Norway, said the portal.

What are the best available technologies?

What the specifics of the application of BAT to the KMMC’s facilities will look like is still unknown, but Helgesen said he’d hold the Russian side to account when the two sides meet in the spring.

Larisa Bronder, who authored a report on industrial pollution for Bellona, suggested that the European Union model for BAT at nickel-cobalt smelting plants – like the KMMC – were broadly accepted.

She said, however, that Russia was in the process of devising its own BAT outlines.

Anna Kireeva of Bellona’s office in Murmansk, which works with issues surrounding the KMMC, said these Russian answers to BAT would be published by the government in 2018. Large industries like the KMMC will then have to choose from the government approved list.

Any discussion a welcome development

Although the exact technical specifications of what will happen at KMMC to meet the promised sulfur dioxide cuts remain unknown, Kireeva said the fact that Donskoi discussed the adoption of BAT with Helgesen was a “good sign.”

Oskar Njaa, an adviser to Bellona’s Russia group in Oslo, said high level meetings between Russian and Norwegian officials have been rare because of Western sanctions against Russia over the crisis in Ukraine.

“Norwegian politicians have underlined that the sanctions should not affect the cooperation on environmental issues,” he said. “Although it is obvious that it has to have some effect.”

Because of that, he said, “Bellona regards this as a signal that the work with solving our common, borderless environmental problems seems to be ongoing, at least to some extent, even despite a colder relationship between Norway and Russia.”

Kireeva noted that the impact of best technologies at the KMMC might not be felt for some time. The effects of the Zapolyarny retrofit are only visible now, five years after the remodel began.

“Lets hope that the cuts will be more significant than the talks about the cuts,” said Kireeva. “The most important thing is that the cuts happen soon.”