Inside the KMMC’s smelting works in the industrial city of Nikel. (Photo: Courtesy of Vladimir Voronov)

MURMANSK – The Kola Mining and Metallurgical Company (KMMC) – a daughter enterprise of the giant Norilsk Nickel – regularly exceeds allowable pollution limits by as many as 10 times, and continues to pollute paying negligible fines amounting to a few hundred euros.

On June 22, according to Russia’s Federal hydro-meteorological agency, Rosgidromet, a sulfer dioxide spike of more than 10 times the limit was measured over a two hour period. Yet another double digit violation occurred on July 7, when concentrations hovered above 10 times the limit for three hours. In all three cases, the pollution peaks occurred at night during bad weather. 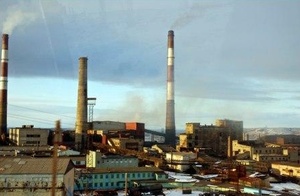 “I have a feeling the text of Rosgidromet’s information aims to calm the inhabitants of Nickel, as if there is no big harm in having such a high concentration of pollutants for several hours,” said Andrei Zolotkov, director of Bellona Murmansk. “I guess the reaction of the state environmental authorities would be completely different, if, let’s say, background radiation was two times higher for at least a couple of minutes at the sites of Kola nuclear power plant or [Russia’s nuclear icebreaker port] Atomflot.”

Sulfur dioxide is a toxic compound posing a third class danger, by Russia’s measurement system, to human health. Its maximum safe concentration is one half a milligram per square meter.

What level of air pollution is lurking under the vague official formulation of “10 times and higher maximum allowed concentrations”, as recently Murmansk’s division of Rosgidromet has stopped providing precise pollution figures. The first time this new formulation was was issued was in June. Prior to this summer, Rosgidromet always publicized exact figures.

Rosgidromet told Bellona in interviews that it uses the phrase “high level of pollution” to connote pollution levels of 10 times or more above allowed limits. The agency said its instruments don’t register exact numbers when levels soar about 10 times permitted concentrations.

“The measurement instruments we buy are intended to measure pollution in the populated areas, they’re oriented to the maximum concentration of 5 milligrams per square meter, which corresponds with 10 times higher than ambient air standards,” a Rosgidromet representative told Bellona by telephone. “The instruments can correctly measure anything higher than 10 times the maximum concentration.”

That engineers never thought of designing instruments that would accurately measure pollution levels exceeding 10 times allowed caps is telling: It would seem they simply couldn’t imagine such high levels occurring in populated areas, like Nikel. 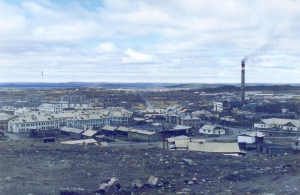 Why precise measurements of 12.6 times above the allowable pollution ceiling ascertained by Rosprirodnadzor in April –triggering investigations – should have been followed by Rosgidromet’s instruments failing to make precise measurements on anything over 10 times the cap is a matter of interesting speculation. Whether Rosgidromet will soon purchase gauges allowing for a wider spectrum of sulfur dioxide concentration remains in question.

The April pollution level of 12.6 followed a day later by measurements of 6.7 the maximum allowed sulphur dioxide concentrations came about thanks to adverse weather conditions. The KMMC was warned in advance about bad weather, which obliged it to cut its emissions.

Rosprirodnadzor’s subsequent investigation of extreme pollution in July also ended with an administrative fine of 31,000 RUB (€470).

The laughable fines levied again one of the world’s richest companies for gassing the populations of its host cities speaks for itself. One might draw the conclusion that environmental NGOs pose a bigger risk than heavy metal billowing industries: The minimum fine face by an NGO receiving foreign funding that fails to register itself with Russia’s Justice Ministry as a “foreign agent” is 300,000 to 500,000 rubles, or €4,550 to €7,550.

As it turns out, the environmental prosecutors’ office investigation of the KMMC founds it’s inclement weather pollution reduction plan to be ineffective.

“[The plan] leads to extreme air pollution and sufficient concentrations of dangerous elements during adverse weather condition,” the environmental prosecutor said on its web portal. “As a result of violations, the prosecutor brought an administrative case against the chief of environmental department of the [KMMC] for not fulfilling environmental requirements.”

Further, the environmental prosecutor said the KMMC’s pollution reduction plan for bad weather was out of whack with Russian environmental legislation.

This plan, incidentally, is an official document produced by the company and approved by the Murmansk Regional Environmental Ministry. It easy to remember how the ardently the Murmansk Administration praises that the KMMC’s environmental policies, and insists it has no “irresolvable conflicts” with environmental groups or legislation.

“The explanatory note to the [bad weather] Plan contains almost no information,” continued the findings from the environmental prosecutor’s office. “There are no calculations or explanations that need to be taken, [and] no economic estimations. The document also lacks a diagram plan of pollution control at the sites, or a list of pollution control points of the polluting installations. There is no estimation of effectiveness of the bad weather actions on each polluting element”

The company must also correct and agree upon a bad weather action plan.

Bellona will follow developments to make sure the KMMC ceased its violations, produces a proper plan of action to mitigate pollution, and will continue to monitor pollution levels in the Murmansk Region.