MURMANSK – Legislative and executive representatives acknowledge the important role of environmental organizations in solving environmental issues, specifically industrial pollution. Ecologists, though, remain frustrated by the disinterest of industry to invest in the environmental sphere, and say their involvement should be a two way street. 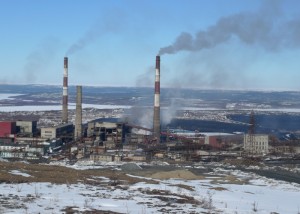 MURMANSK – Legislative and executive representatives acknowledge the important role of environmental organizations in solving environmental issues, specifically industrial pollution. Ecologists, though, remain frustrated by the disinterest of industry to invest in the environmental sphere, and say their involvement should be a two way street.

Bellona yesterday arranged a roundtable discussion in Murmansk for non-profit organizations operating in the Barents Region to swap experience working toward solutions over industrial waste and cooperation with polluters, legislative and other government authorities and environmental monitoring agencies. “By initiating an open discussion on such pressing problems for the whole Barents region, we were confident that the interest of many NGOs and monitoring agencies would be piqued,” said Larisa Bronder, an adviser on pollution issues with Bellona’s Oslo office who was in attendance in Murmansk.

Conference participants were surprised by the level of enthusiasm shown by the regional divisions of the Russian Ministry of Natural Resources and the Environment, and the Murmansk Parliament’s Environmental Committee to addressing these long-thorny issues. Less surprisingly, the Federal Service for Natural Resource Usage, or Rosprirodnadzor, again turned a cold shoulder on entering a dialogue with environmentalists. “The role of non-governmental organizations in the decision of environmental problems is very important,” she told the round table. “I know first hand that solving ecological issues can only be done in consultation with the public. And I would like to thank all environmental organizations with whom we try to pursue effective cooperation in solving the regions problems.” She added that the environmental movement is particularly strong in Murmansk.

She enumerated numerous projects the regional parliament is discussing with environmentalists, among them safe oil transport, nuclear and radiation safety, development of Murmansk’s transport infrastructure, creation of the Khibin National Park, and others.

Renata Khardikova, a representative of Murmansk’s Regional Ministry of Natural Resources, cooperation between authorities and NGOs is an important tool in addressing environmental problems.

That said the environmentalists themselves aired a laundry list of hurdles to their meaningful cooperation with authorities and environmental monitoring agencies.

According to Viktor Petrov, acting director of the Kola Center for the Defense of Nature (in Russian), there are no reciprocating mechanisms for cooperation with NGOs.

“There are no legal acts or administrative means for advancing the position of the public and NGOs to authorities,” Petrov said. “This can only be accomplished by personal ties: personally going to a concrete parliamentarian, to a bureaucrat at the Ministry, and explaining, for instance, our disagreement with this or that decision.”

As far as cooperation with the Murmansk division of Rosprirodnadzor is concerned, the agency’s utter neglect of environmental opinion is beyond comprehension. According to Bellona Murmansk, this agency, which is charged with monitoring pollution and punishing it categorically refuses to cooperate with environmental organizations.

“It would seem that this agency in specific should be the most heart sick, as it were, over the environment and strive for close ties with NGOs,” Bellona Murmansk told the round table. “However, for the past couple of years the regional division of Rosprirodnadzor has not answered our official inquiries, which is in fact illegal. We are left only with turning to prosecutors and the federal Rosprirodnadzor with requests to deal with the situation and force regional administrators to respect the law.”

Rosprirodnadzor’s disinclination to deal with NGOs has often been occasion for the organization to cast aspersions on scientific findings regarding pollution coming from the Murmansk Region and wafting across borders.

Tensions between communities in Northern Norway and the Kola Mining and Metallurgy Combine, or KMMC’s, three industrial operations in the towns of Nikel, Pechenga and Zapolyarny, have been strained for more than 20 years as the smelting operations continue to dump tons of sulfur dioxide in the Sør Varanger area.

The KMMC is a daughter corporation of Russia’s giant Norilsk Nickel, which produces one third of the world’s nickel supply.

The argument reached something of a fever pitch last summer when a Russian group called Green Patrol alleged that Norway was responsible for polluting the Murmansk Region, and not the other way around.

The claims, supposedly based on findings by Rosprirodnazdor, were eventually debunked by the Norwegian Institute for Air Research (NILU) and its Russian counterpart, the Russian State Hydrometeorology and Environmental Monitoring Agency (RosGidromet), as a political ploy. But the short-lived media war railing against supposed Norwegian pollution of Russia did nothing to help advance constructive dialogue between Oslo and the KMMC.

Any efforts at cooperation between the KMMC and Russian and Norwegian NGOs are currently at a standstill.

Bellona Murmansk at yesterday’s roundtable detailed the difficulties it has had in maintaining a dialogue with the KMMC, and said that being the single NGO in the area trying to influence policy at the industrial juggernaut was extremely complicated.

“Many things: openness, access to information, et cetera, depend strictly on the goodwill of the company itself,” said Bellona Murmansk. “There is not a single NGO that has levers of influence on the industry.”

Bellona Murmansk attempts to hold joint seminars, environmentalists are occasionally allowed on KMMC territory, but any real reduction in sulfur dioxide pollution continues to be elusive because of industry reluctance to modernize production.

Leschinskaya, of the Murmansk Parliament’s environmental committee said she had been invited on a press tour on industrial pollution questions at the KMMC arranged by Bellona last year for Russian environmental bloggers.

“We observed a tendency toward openness from the side of the KMMC, which allowed us to visit its briquetting workshop at its Zapolyarny site and its pavilion at Nikel,” she said. “But questions of the KMMC’s impact on the environment and local health remain. It is precisely these health questions that raise the largest fears because official statistics indicate that oncological illness rates in our region are higher than averages across Russia.”

Leschinskaya said that since 2008 the incidence of oncological illnesses in Murmansk has risen by 20 times.

“Of course, diagnostics have improved,” she said. “But we cannot forget that oncological date arises as a result of the prolonged influence of one or another factor on human health,” she said.

Unfortunately, there is no system in the Murmansk Region that would engage in public education aimed at informing and defending the population’s environmental rights, any mechanisms for dealing with its complaints about the violations of those rights, or any place for residents to turn for free consultations on these issues. told the roundtable about how such work is done in his region.

“Our task is a prophylactic against natural preservation violations,” he said. “If you come to our [Russian only] website, there are announcements from residents about various environmental violations, and we begin work with organizations or companies responsible for the violations.”

He said they endeavor not only to force businesses to right their violations, but prevent them from being repeated.

The inspections, he said, are effected via independent visits with the cooperation of oversight structures to sites indicated as spots where violations have occurred. As such, the population in general is drawn into being vigilant about their local environment.

Charles Digges translated and contributed to this article (charles@bellona.no)