The hydrogen fuel cell version of the Opel Zafira last week made a pit stop in Oslo while undertaking the longest journey—from Hammerfest, Norwary to Cabo de Roca, Portugal—that a fuel cell car has ever made. Bellona, which has long pioneered hydrogen fuel cell projects in Norway, got a chance to get behind the wheel and take the car for a test drive. 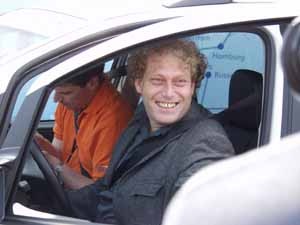 GM-Opel has long been signalling its wish to mass produce hydrogen fuel cars by 2010, which would produce a massive environmental benefit.

The journey from Hammerfest to Cabo de Roca is expected to take six weeks. It began on May 3rd, and, after a dog-leg through Sweden, the car was in Oslo by Thursday, complete with a van full of technicians and mechanics to monitor the cars performance and supply fuel, given the lack of liguid hydrogen filling stations on the way to Cabo de Roca—an infrastructure that will hopefully be built as hydrogen power gains popularity.

Successful start
The launch of the GM-Opel effort went smoothly from the centre of Hammerfest. Mayor Alf Jakobsen of the Labour party gave the opening speech that sent the car off on the first leg of the journey towards the Swedish border, on its way to Portugal. He also sent a gift to the mayor of Lisbon along with the car, which the team will deliver in mid June.

This is the first time that Opel test drives its cars over such a vast distance, and the Opel engineers are very aware of the risks involved in making such a test journey in public.

Tossing the hydrogen ball into the EUs court
The goal of the GM-Opel developers is to be able to offer cars with a price-tag of about $50 per kilowatt hour, which is equal to current costs of cars of normal internal combustion engines.

For this reason, the GM-Opel group are calling for an extensive network of filling stations for hydrogen, so that everybody can use the cars. This clearly requires a political effort. Regulations for standardising and approval of the cars are also called for. Introducing such regulations in Norway is also the aim of the hydrogen car project run by Bellona.

With this zero-emissions tour through Europe, GM-Opel is placing the ball squarely in the court of European politicians, as this seems to be where the hurdles currently lie. 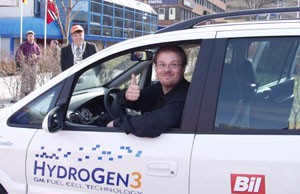 Bellona gets a glimpse in the crystal ball
Isak Oksvold, who heads up Bellonas hydrogen projects, was allowed an opportunity to test drive the car in Hammerfest a week ago.

Its amazing to see how the engineers in GM and Opel have developed this technology, said Oksvold.

Its practically impossible to distinguish this fuel cell car from a normal car when you get in. A big difference is apparent, however, as soon as you start the car, as it is virtually noiseless.

But the most crucial difference is what comes of driving the car: There are no dangerous, greenhouse gases in its emissions, and the water that comes out from the tube located where an exhaust pipe on a conventional car would be is actually clean enough to drink.

Performance of a conventional car
The fuel cell version of the Opel Zafira is virtually hand made by almost 200 engineers.
It was not uncommon in previously built fuel cell cars for quarters to be cramped because of the fundamental restructuring of the car that would have to take place to outfit it with a fuel cells. Such is not the case with the Opel Zafira fuel cell car, which has room for five, as well as luggage. The liquid hydrogen tank, which requires a large amount of space, is situated under the back seat of the car.

Additionally, the Opel Zafira fuel cell car weighs only 50kg more than a standard gasoline-run Zafira. The power from the electric engine and the fuel cells is also impressive. The engine delivers the effect of 60kilowatts, or 82 horsepower, 215 Nm torque, and goes from 0 to 100kilometrs per hour in about 16 seconds. When the tank is topped off with 4.6 kilograms of liquid hydrogen, it can travel 400 kilometres. This is equal to the performance of a standard household, gasoline-run automobile. Opel has also made a version of the car with hydrogen compressed to 700 bar.

In Oslo
Throughout the marathon drive, the car and its team will make stops at selected universities and colleges to provide educational opportunities about fuel cell and hydrogen technologies. under the auspices of GMs science centre.

On Thursday afternoon, four days after beginning its journey from Hammerfest, the hydrogen fuel-cell Opel Zafira made a stop-over in Oslo. The car was greeted by Noways minister of transport and communications, Torhild Skogsholm and other zero emission enthusiasts. With Bellona President Frederic Hauge behind the wheel and representatives from GM-Opel as co-pilots, Skogsholm also got to test the Zafira. Skogsholm called the cars pit-stop in Oslo an historic day.

On Friday the car was on display on campus at the University of Oslo, and students, press and others could obtain information on hydrogen and zero emission vehicles. The cars also drove on the campus square so the crowds could experience the practically noiseless engine, and see for themselves that the only emission from the cars tailpipe was clean water.

In the mobile GM-Opel exhibition trailer one could also learn more about how a fuel-cell functions and watch both a movie and a model of the very high tech—and extremely aesthetically pleasing—Opel Hy-wire. The Hy-wire is the worlds first vehicle that combines a hydrogen fuel cell with by-wire technology.