During the hydrogen workshop March 20th in the EU-Parliament, Member of Parliament Claude Turmes asked if hydrogen is a Trojan horse to the nuclear industry.

Published on March 21, 2003 by Sondre Grinna, translated by Hanne Bakke

Claude Turmes is Member of Parliament representing the Green party, and arranged the workshop in collaboration with Bellona. He opened the workshop with some thoughts on the hydrogens position in the European energy debate.

He was particularly concerned about the powers working for larger use of nuclear power. Turmes asked the question whether the recent years focus on CO2 is about to take focus away from other important energy questions. Nuclear power produces large amounts of energy without CO2 -emissions, and can therefore be labelled green without deserving it. 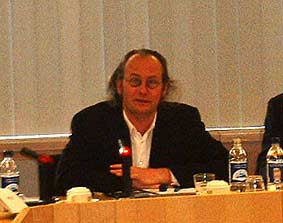 Hydrogen will climb on the political agenda
Turmes asked if hydrogen is a Trojan horse to the nuclear industry. The question is valid, as the nuclear crusaders have taken central seats in the EU high-level group for hydrogen. With hydrogen as a dominating fuel, an enormous marked for nuclear power opens up.

Hydrogen will soon strengthen its position on the EU-agenda, Turmes said. Both president Prodi of the European Commission, and president Bush of the USA, are speaking warmly about hydrogen, an indicator of a higher ranking on the political agenda.

Few asks where the hydrogen is supposed to come from

Turmes has noticed that even though many people are talking about the beneficial features of hydrogen as an energy carrier, few have answers to where the hydrogen is supposed to come from. This experience is shared with Bellona.

It was therefor with great pleasure Bellona could present CO2 -handling as a possible solution within a short timeframe. Even though the solution are based on a final fossil source, and therefor not an optimal solution, the eagerness from the nuclear industry might lead to that green European politicians and organisations catches interest in CO2 -handling as a solution until the capacity of renewable sources are adequate.