The Norwegian Labour Party proposes the establishment of a hydrogen fund in order to strengthen hydrogen as an alternative fuel. This will establish a network of at least 65 hydrogen filling stations in Norway within 2008. 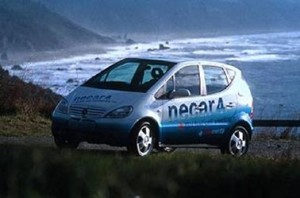 ——
Latest: The Parlament rejected the proposal with 54 against 42 votes.
——

The Norwegian government presented in May a white paper regarding how the Kyoto goals can be reached. The Parliamentary committee for energy and environment presents their remarks today. The Norwegian Labour Party, Norways larges party, launches in their comments an important initiative to accelerate the spread of hydrogen as fuel. The Socialistic Left Party and the Center Party support the comments.

The Labour Party proposes in their comments that the establishment of a hydrogen fund should be used as an effort to strengthen hydrogen as an alternative fuel. The fund is meant to establish a network of at least 65 hydrogen filling stations in Norway within 2008. This will give the major part of the Norwegian population the opportunity to choose hydrogen automobiles.

The chicken and egg problem
The building of a network of hydrogen filling stations is perceived to be one of the major obstacles in the employment of hydrogen as fuel. Nobody wants cars that can not be refuelled, nor does anyone want to build filling stations as long as there isn’t any customers. The problem is known as the chicken and egg problem.

Many believe that it is up to the authorities to solve this problem in taking the first unprofitable investments. The Labour Party is therefore taking action and wants to eliminate the problem. If the proposal from the Labour Party gets the majority vote, this would be a major step toward building a market for hydrogen as fuel.

Create a predictable situation
The proposal to organise the financing as a fund has many obvious advantages:

If 0.7 Euro cent pr litre is taken from this tax from the start of 2003 and throughout 2008 and invested in the fund, this proposal from the Labour Party will be financed. The State will still be able to use more than 90% of the tax for other purposes.

Put to the vote June 18
The proposal from the Labour Party might become historical. Together with the proposal for depositing of CO2, this will create a breakthrough setting up conditions for use of hydrogen as fuel. A resolution would set an example for other countries.

The proposal will be put to the vote in the Parliament June 18, 2002