Bellona continuously follows different hydrogen projects. Here we present a survey of what is happening in Norway.

Published on November 8, 2000 by Bellona, translated by Lars Olav Fosse 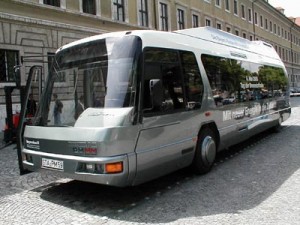 The region of Notodden – hydrogen buses

This project is a co-operation between Norsk Hydro Electrolysers, Organic Power and Nettbuss. The partners are aiming for the implementation of hydrogen buses in the region of Notodden – first and foremost on local routes.

The companies have different tasks in the project. Organic Power produces electricity by burning waste. Norsk Hydro Electrolysers produce the hydrogen through electrolyse and Nettbuss is the bus-company, which will use the buses in their daily traffic. In other words – this is a co-operation between an energy-producer, a producer of fuel and a fuel-consumer.

At the time of writing, the project is at the stage of planning. That is, one is working on the financing and provision of the hydrogen buses. Neoplan in Germany offers the most interesting bus for the Notodden-project. This company is owned by MAN, but has developed its own prototype together with Proton Motor. The bus was presented during spring 2000. According to the plans of the project, the buses could be put into traffic in 2002.

Oslo – hydrogen buses
This project is s co-operation between Norsk Hydro, Bertel O. Steen and Stor-Oslo Lokaltrafikk (SL). The aim is to introduce hydrogen buses to the region of Oslo. Norsk Hydro have solid experience with hydrogen and wish to learn more about hydrogen as a fuel for the transport sector. Bertel O. Steen imports Mercedes and SL, running the public transport in the region, are going to use the buses in their daily traffic.

At the end of the nineties DaimlerChrystler (Mercedes) made their first hydrogen bus – NEBUS. The three partners brought it to Oslo in August last year, partly because they wanted to present their project. NEBUS was put into ordinary traffic between Oslo and Bærum outside Oslo for around two weeks.

Western Norway – hydrogen ferries
Hydrogen is considered to be highly suitable as a fuel in other areas of transport as well. Work on the development of both hydrogen driven planes and ships as well as locomotives has been taken on.

Norsk Hydro recently started preliminary work on hydrogen ferries. In this project they are co-operating with Marintec at NTNU in Trondheim and the Norwegian Institute for Energy Technology among others. Originally the intention was to get an overview of the technical changes necessary to convert an existing ferry into a hydrogen ferry run by fuel cells.

After some time, the goal of the project was redefined, and widened to questions concerning the use of hydrogen in marine transport in general. That is, the focus is no longer only on ferries, but also on ships, submarines, barges etc. Recently this field has got increasing attention internationally.

Utsira – hydrogen and wind
The island of Utsira is located outside Haugesund. It has got no production of electricity of its own, but is connected to the mainland electricity net through a cable. However, the island is a good location when it comes to wind generated electricity, and now it might be interesting to exploit this source of energy. Even though Utsira is a windy spot, stable supply has been a problem when it comes to energy based on wind. Through the production of hydrogen by electrolysers, the energy can be stored at windy days and used on more calm days by generating electricity using fuel cells.

The first of October this year Norsk hydro started a preliminary study to examine the different aspects of such a project. This study will give answers to the questions of whether it is reasonable to build a wind/hydrogen power station at Utsira and what dimensions such a station should have.

Røst – hydrogen and wind
The company Energy Development has got similar ideas for the island of Røst as the ones Norsk Hydro might be realising on Utsira. Just like on Utsira no electricity is produced on Røst, but led by cables from the mainland.

Energy Development is no studying the technical and economical conditions for a wind/hydrogen station on Røst. With such a power station on the island, the old cable to the mainland is hardly needed anymore.

The energypark at Nedre Foss
In this park demonstrations of renewable energy and hydrogen vehicles are planned. Bellona takes part in a joint venture with the aim of openin an energy exposition park in Oslo. This will function as a "show window" making these new types of environmental friendly energy and transportation known to the public.

The energypark in Grimstad
At the Grimstad campus of Agder University Collage (AUC) steps have been taken to establish an energypark. This is a co-operation between AUC and Agder Energy, an energy company owned by the counties located in the southern part of Norway. The aim is to strengthen the two partners position in development and research within renewable energy and hydrogen production and utilisation.

This park was opened the 19 of June this year. Parts of the park are already in place, but more are being planned. At the time of writing the park consists of:

The energypark in Stavanger
ARNE – Arena for regional planning, business and innovation – is planning a new business area in the Stavanger-region.

The idea is to make this area a national energy-cluster. At the time of writing, no formal decision has been made though, but contacts between the local governments and the business environment have been made. Lyse Energy, Shell, Statoil and BP have all shown their interest in the project, and Shell have given signals that they might build a solid oxide fuel cell in the park.

According to the plan, a company working more detailed on the energypark will be set up within the next six months. The location of the park is yet to be decided, but the most likely location is Tananger where Shell once had a refinery. Here construction of the park can start in two years time.

The idea is a park consisting of three interconnected parts:

Other activities
A number of Norwegian companies are exploring the possibilities of hydrogen. Among the most important one finds Norsk Hydro, Statoil, Statkraft, Institute for Energy Technology, Shell – Norway, Raufoss composites, SINTEF and others. Apart from this Norway has also got strong centres of hydrogen-related research and development at the universities, especially NTNU and the University of Oslo.