In July, the German oil company Wintershall DEA got a green light from the environmental agency to begin drilling at the exploration well “Toutatis”, a block in the Norwegian Sea outside the coast of Nordland, 83 km south of Røst and 50 km north of Træna.

Published on October 17, 2019 by Bellona Europa 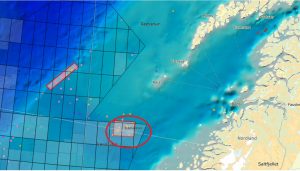 Bellona is going out hard against Wintershall DEA’s risk assessment of the exploration drilling at Trænarevet, outside Lofoten. ” Remarkably poor,” says Frederic Hauge.

On Friday, The Bellona leader met with the Norwegian Ministry of Climate and Environment to discuss the issue. He hopes that the Department will grant suspensory effect and delay the decision on the start-date of the drilling operation which is set in late October or early November.

In July, the German oil company Wintershall DEA got a green light from the environmental agency to begin drilling at the exploration well “Toutatis”, a block in the Norwegian Sea outside the coast of Nordland, 83 km south of Røst and 50 km north of Træna. The application was submitted for public inquiry, with a final deadline 6th of August. “The deadline was in the middle of the public holidays, we managed to finish a complaint, but time was scarce. This is a form of stealth-drilling,” Hauge says to NTB.

Late September, Bellona filed 30 pages with additional information to the complaint, which is demanding answers from the oil company and the authorities.In the complaint – that is in the process of being evaluated at the Ministry of Climate and Environment – it states:

“The application has insufficient parts. It is not based on updated information and uses selective and minimalizing assumptions. Consequently, the application gives a misleading picture of the facts surrounding the case and raises questions that we have asked the Department to assess”

Hauge is not impressed with Wintershall DEA and the third party consultant DNV GL’s environment impact assessment and risk analysis. “We have found loads of information that is excluded from the application, it’s quite remarkable. The application is tainted by poor quality and secrecy,” says Hauge.

Use of chemicals not assessed

The oil company’s use of chemicals in case of a blowout have not been assessed in terms of environmental impact in the application. These include the company’s plans to use so-called dispersants. Chemicals which dissolve oil and cause it to sink to the bottom.
“The application relies on an environment impact assessments made in 1994. At that time, we didn’t even know that the coral reef Trænarevet existed,” says Hauge.

He’s referring to that when oil sinks it is more easily taken up by organisms at the bottom of the sea. I addition, the use of dispersants increases the risk of workers getting chemical poisoning. “This is an issue which is not even mentioned by the environment agency,” Hauge says.
He also points at difficult geological conditions in the area – this is not an easy area to conduct drilling operations, another issue that is strangely left out.

News on that Wintershall DEA had to close down to wells earlier this year because the oil didn’t produce as expected at the Maria-field where they are operators came out in an article in the Norwegian news agency DN. Hauge says to NTB that when such information is revealed, it is hard to trust the company to know what they are doing. “We can see that their calculations don’t add up,” states Hauge.
Both Bellona and Nature and youth have announced that they will fight against the exploration drilling with all means. To the Norwegian newspaper Dagbladet they said that they are ready to protest when the operation starts.

Bellona’s boat is readily located in Lofoten close to the field.