NEW ORLEANS – In a decision closing the second part of the trial against BP, a federal district judge in New Orleans will hold the company responsible for spilling 3.19 million barrels of oil in the 2010 Deepwater Horizon disaster, which could lead to a penalty against the company of some $13.7 billion.

Published on January 19, 2015 by Charles Digges 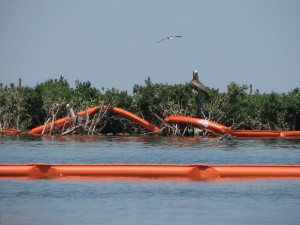 NEW ORLEANS – In a decision closing the second part of the trial against BP, a federal district judge in New Orleans will hold the company responsible for spilling 3.19 million barrels of oil in the 2010 Deepwater Horizon disaster, which could lead to a penalty against the company of some $13.7 billion.

On Thursday, Judge Carl Barbier of Federal District Court in New Orleans issued a 44-page finding of fact ruling. The ruling sets the stage for the third phase of the staggeringly immense federal case, which will begin here Tuesday.

Barbier ruled that BP’s Macondo well blowout spilled 4 million barrels, but downgraded that amount to a net emission of 3.19 billion barrels based on BP’s accounting of its oil recovery efforts.

The third portion of the trial will play out against the backdrop of disaster’s coming 5-year anniversary, marking the largest marine oil spill US history, and a continually worsening public health crisis on the Gulf. During this part of the litigation, BP and the government are expected to argue over whether the company must pay the full $13.7 billion liability ceiling set by Barbier’s ruling last week. The fine would represent the largest pollution fine in US history.

The Deepwater Horizon oil rig fire and explosion on April 20, 2010, killed 11 men and caused the largest marine oil spill in US history. The seemingly unstoppable gusher from the undersea well flowed for 87 days and fouled an estimated 110,000 square kilometers of gulf waters and nearly 800 kilometers of coastline from Louisiana to Florida.

Judge Barbier in September found BP grossly negligent in causing the spill, which opens the door to applying the maximum fine set by the Clean Water Act of $4,300 per barrel spilled. In separate proceedings, BP is appealing the court’s gross negligence finding.

Numerous environmental groups are pressing for the maximum, especially in light of the somewhat equivocal method via which Barbier said he arrived at the 3.19 billion figure.

“For people who do not live along the Gulf, it is easy to forget the severity of the BP Oil Disaster and the on-going impacts we are still experiencing now almost 5 years later,” Marylee Orr, Executive Director of the Louisiana Environmental Action Network (LEAN) told Bellona.

“No amount of money can replace what has been lost, but BP must face the maximum fine,” she said.  “To not do so is an insult to the 11 men who died, the ecosystem that has been harmed and the many people who are still ill today because of their exposure to both the Corexit and the oil.”

Collin O’Mara, President and CEO of the US National Wildlife Federation, said BP deserved “full responsibility” in an email statement to Bellona. “Countless wildlife species are impacted and miles of coastal wetlands are degraded, all because the oil giant put profits ahead of safety,” O’Mara wrote.

How the judge measured the spill

Barbier’s estimation of the number of barrels spilled is substantially less than the 4.9 million barrels experts for the federal government estimated, but is more than 2.45 billion barrels the oil company submitted were spilled in the underseas gusher.

But Barbier’s figures presented in court didn’t demonstrate specifically how he arrived at his capping figure. He wrote that data from the government and BP was “voluminous, dense, highly technical, and conflicting,” adding that, ”Both sides presented evidence to support their cumulative flow estimates [and] each mounted effective attacks on the other’s calculations.”

Ultimately, he wrote, “There is no way to know with precision how much oil discharged into the Gulf of Mexico.”

Eighty percent of the money collected from BP in the last phase of the trial will go to the five Gulf States most affected by the spill.

“I think you’ll see a record-setting penalty,” said Dan Jacobs, a professor at American University’s Kogod School of Business and a former Justice Department lawyer dealing with environmental cases. “This is the worst environmental disaster in US history, at least according to [P]resident Obama. A major underlying rationale for imposing a substantial fine in a case like this is its deterrent value.”

Attorneys for the companies and prosecutors from the US Department of Justice have laid out their cases in pretrial briefs.

The Justice Department’s pretrial brief, as quoted by the New Orleans Advocate, says that: “Given the enormity of this spill and its toll on individuals, society and the environment, and given BP’s egregious behavior, the court should only reduce the penalty if (BP) presents valid reasons to do so, using the factors set out in the statute. But most of the factors do not call for any reduction from the maximum amount.”

BP’s counterargument to the maximum fine, company representatives wrote, is that, “Many Gulf beaches were left cleaner than they had been in years, seafood landings data shows levels that are now consistent with those pre-spill, and tourism records have been broken,” the company argues. A cleanup worker with a BP subcontractor wearing nearly none of the proscribed defense gear, such as a hazmat suit, a respirator and full time skin covering. (Wikimedia Commons)

But investigations by Bellona and numerous US-based universities, NGOs and Bellona interviews with former clean up workers and local fisheries cast enormous doubt on BP’s assertions.

The National Wildlife Foundations O’Mara said that, “While it will likely be decades before we fully comprehend the extent of damage to wildlife, we do know that nearly five years after the explosion, dolphins are dying in high numbers, sea turtles are failing to nest, and oyster production remains low.”

Jonathan Henderson of the New Orleans-based Gulf Restoration Project 10 days ago collected numerous Deepwater Horizon-origin tar balls still washing up on the beaches of Grand Isle Louisiana, he told an Internet-based telephone gathering of reporters, including Bellona, last Wednesday. Henderson has been collecting such tar balls since the blowout.

BP’s dumping of 2 million gallons of the oil dispersants Corexit 9527A and 9500A, which are known to cause cancer and a gamut of other serious illnesses, left enormous mats of oil and dispersant off the coasts of Gulf States and buried on beaches. Many former clean up workers told Bellona that beached oil slicks were rarely removed, and only sanded over.

Shanna Devine of the Government Accountability Project (GAP), the US’s premier whistleblower protection organization, confirmed in Wednesday’s conversation Bellona’s discovery this summer that cancer rates among Gulf communities impacted by the mix of crude and Corexit are spiking. A mutated crab with three claws pulled up in shrimp nets. (Charles Digges/Bellona)

Meanwhile, fishermen continue to pull up severely mutated shrimp and crab up their nets, while Bon Secour Fisheries in Alabama and P&J Oysters of Louisiana, two of the Gulf’s largest oyster distributers, told Bellona their harvests have plummeted by 50 percent and 90 percent, respectively. Individual fishermen report they’ve not been able to make a living since the spill.

Dolphin deaths in the Gulf over the past year have reached shocking proportions, Dr Riki Ott, one of America’s preeminent marine toxicologists and oil spill experts, and director of ALERT, said last week.

Still, one of BP’s lead lawyers, Andrew Langan told the Guardian “BP should be subject to a Clean Water Act penalty at the lower end of the statutory range.

If the verdict handed down seems too stiff for BP, it will have the right to appeal, meaning it could be decades before the Gulf States in contention for the fine money see any of it.