Published on September 5, 2014 by Charles Digges 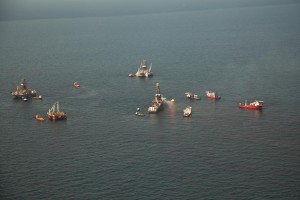 The Deepwater Horizon drilling rig, which BP leased and operated, exploded and sank in the Gulf of Mexico in April 2010, killing 11 men and spewing 4.9 million of barrels of oil and plodded through 87 days of hit and miss attempts to plug it until it finally manage to seal it.

Meanwhile, thousands who assisted in cleanup efforts have been struck so ill they will, as Dr Michael Robichaux of a Louisiana, who has treated many of them has said, “never work again, never again have normal lives.”

Indeed, Bellona has been contacted over the past month by dozens more former cleanup workers and fishermen who have provided medical records indicating they are dying of cancer. “Today’s decision by Judge Barbier was a welcomed sign to many of us who have been witness to the endless responsibility dodging of BP for the last four years,” she told Bellona in an email after the verdict.

“No amount of fine money can bring back the 11 men killed but hopefully this sends a clear message to the industry that endangering the lives of workers and devastating the environment will not be tolerated. You will be held accountable no matter how big a company or how much you spend on tourism commercials,” she wrote.

The ruling handed down by Barbier could eventually mean that the government can impose penalties nearly four times as large as it could if BP were not found guilty of gross negligence. The “gross negligence” finding impacts the amount of money BP will have to pay for each barrel of oil spill: “negligence” would have cost the company $1,100 per barrel, while “gross negligence” raises the fine to $4,300 a barrel.

Thus, the company could face fines as high as $18 billion, four times the amount the company apparently expected. BP had set aside $3.5 billion for potential Clean Water Act fines – an indication the firm had expected a more lenient ruling.

Lawyers for the company also noted in court that in previous oil spill cases, the US government and the courts have imposed penalties far lower than the maximum. Today’s ruling on negligence is one but one of a three-part case that will decide the fines the US government can impose on the London-based oil mega giant. Today’s part apportioned blame for the accident.

The second part aims to determine the size of the spill – a hotly contested issue with independent experts putting it at 4.9 million barrels, the US government saying 4.2 million, and BP submitting it spilled only 2.45 million barrels.

Judge Barbier’s ruling Thursday said BP should shoulder 67 percent of the blame for the spill, with drilling rig owner Transocean responsible for 30 percent and engineering giant Halliburton responsible for percent.

His ruling details a catechism of errors by BP that concludes the oil giant prioritized money over safety.

“BP’s decision was primarily driven by a desire to save time and money, rather than ensuring that the well was secure,” Barbier wrote of a decision BP made to forgo a crucial test as the company rushed to complete its drilling at the Macondo well and move the Deepwater Horizon rig to another site.

In particular, Barbier said, the company’s decision to drill the last 100 feet of the well left it in “extremely fragile condition” and vulnerable to blowout.

“The court agrees that the decision was dangerous and further finds that it was motivated by profit,” he wrote.

BP today issued a statement saying it “strongly disagrees” with the ruling and that it would appeal to a higher court.

“The law is clear that proving gross negligence is a very high bar that was not met in this case,” said the firm.

BP has vowed to appeal the verdict to a higher court.

But the ruling sends a thunderclap to the oil industry, which has insisted that BP is an outlier, about the possible consequences from an offshore spill.

Said Carl Tobias, a law professor at the University of Richmond, told The Los Angeles Times that, “What the federal government is trying to do is to deter and punish anything this environmentally disastrous from happening again, so that companies will think twice, thrice, about what they do.”

The sick and dying not impressed.

Fishermen, other former cleanup workers and even a former contractor for the National Oceanic and Atmospheric Administration (NOAA)– the point agency on the spill, and one responsible for playing down its lingering effects – were not quick to applaud the ruling. Jack Hill, 54, a former shrimper from Bayou Labatre, Alabama contracted cancer through what doctors have confirmed was exposure to oil and its deadly mix with the dispersant Corexit, which makes sweet crude 52 times more carcinogenic. BP dumped some 1.85 million gallons of the toxic dispersant on the spill. His doctors have given him a year to 18 months to live. No eventual settlement, he says, is going to help him.

Former beach cleanup worker Lamar Moore, who has been largely housebound and unable to work thanks to his work cleaning up tar mats from the spill on Dauphin Island, Alabama, is a step ahead of eviction with a baby girl on the way.

“They could fine BP $18 billion or $800 billion and it’s not gonna get me my life back,” he said. “All the judge said today is what all of us have known all along – BP doesn’t give a damn about what it did.”

Scott Porter, a marine biologist and former diver with NOAA, who resigned his post over the agency’s “public lies,” was similarly unimpressed. Porter conducted dives in deadly plumes of oil and Corexit, and has suffered symptoms identified by Dr Robichaux as typical spill related illnesses, including neurological damage and blistering skin rashes.

“BP is going to appeal, the appeal will continue to drag out the process of paying those of us who are sick,” he said. Recalling Exxon’s legal strategy for dodging paying health damages after the Exxon Valdez spill that was also heavily treated with Corexit, he said, “the appeals process will outlast all of us who are ill – they will keep the suit in court until the last one of us is dead.”

Lean’s Orr said she hoped it would not come to that.

“I hope the next step is finding real justice for the cleanup workers and coastal residents who have been suffering with severe and mostly unaddressed health impacts since the oil disaster,” she told Bellona.