Seven from the crew of the Arctic Sunrise, the Greenpeace vessel that launched dinghies of activists to scale a Barents Sea oil platform two weeks ago, have formally been charged by a Murmansk Court of piracy, Greenpeace said in its live feed of the proceedings.

Published on October 2, 2013 by Charles Digges 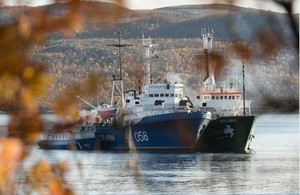 But the charges will not stop there, one Russian law enforcement official anonymously told the Murmansk-based news portal Russkaya Planeta.

According to the source, other detained activists were delivered by convoy to the Murmansk court to officially be charged, though was unable to say how many of the 30 arrested activists, crewmembers and journalists had been loaded into the police vans.

“The process of levying charges could run late into the night,” the source told Russkaya Planeta.

Reuters reported that by the end of the day, all 30 activists are likely to be charged with piracy

Lawyers for the jailed activists hotly disputed the charges to reporters.

Mikhail Kreindlin, a lawyer for the organization, told Interfax that, “We believe the charges absolutely unfounded and illegal. Our activists had no motive for taking possession of anyone’s property. There was no crime”

“The investigators’ evidence is irrelevant,” said lawyer Irina Isakova in remarks to Gazeta.ru. “The steno gram of the interrogation (or the activist) contains no concrete facts that point to any specific individual” taking part in activities that could be classified as piracy, she told the Russian language news portal.

She said further that investigation’s evidence was “collected in violation of the law” and is thus inadmissible. She vowed to file a complaint on unlawful activities of investigators and the court.

“A charge of piracy is being laid against men and women whose only crime is to be possessed of a conscience,” Greenpeace International Director Kumi Naidoo said in a statement. “This is an outrage and represents nothing less than an assault on the very principle of peaceful protest. Any claim that these activists are pirates is as absurd as it is abominable.”

The Russian Coast Guard – which is commanded by the FSB, the successor organization of the KGB – foiled an attempt on September 18 by a number of activists aboard the Arctic Sunrise to scale Prirazlomnoye platform owned by the oil division Russia’s state-controlled gas monopoly Gazprom in a protest against oil drilling in Arctic waters. The Russian Coast Guard fired 11 warning shots over the bow of the activist ship, according to Greenpeace reports.

The next day, the Coast Guard seized the Arctic Sunrise by sending some 15 armed and masked FSB agents down rappelling ropes from a helicopter and onto the deck of the ship. They then towed it to the port of Severmorsk, near Murmansk, with the crew and activists aboard.

Greenpeace insists the boarding of the vessel was illegal, saying that while the vessel was located within the European Economic Zone during the invasion, it had not intruded on Russian territorial waters. Russian authorities have countered that since the Arctic Sunrise had come within 500 meters of the state oil rig, the coast guard acted correctly by invading the vessel.

Russian President Vladimir Putin said last week the activists were “not pirates,” but may have broken international law.

Putin’s spokesman Dmitry Peskov would not immediately return phone calls on Wednesday regarding the piracy charges being doled out in Murmansk.

Piracy, as defined by article 227 of Russia’s penal code entails “an attack on a ship at sea or on a river, with the aim of seizing someone else’s property, using violence or the threat of violence.”

During a marathon court session at Murmansk’s Lenin District Court Thursday that stretched into the wee hours, 22 of those aboard the vessel were ordered held in pretrial detention. The remaining eight crewmembers and activists were on Sunday also sent to jail for two months. 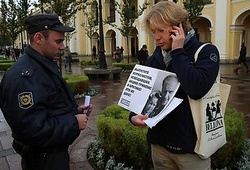 The Committee to Protect Journalists issued a statement, quoted by the New York Times, hectoring the possible charge of piracy against Sinyakov “laughable,” because “the only thing he intended to take from the scene was pictures.”

Bellona was also one of the first signatories of a petition to Putin demanding the release of the Greenpeace activists and crew.

The Prirazlomnoye platform is the first offshore rig in the Arctic. It was deployed to the vast Prirazlomnoye oil field in the Pechora Sea in 2011, but its launch has been delayed by technological challenges. Gazprom says it will go into operation by the end of the year.