MURMANSK – While Russian gas and oil companies jockey for position to produce on the Arctic Shelf, specialists from emergency services are attempting to address the issue of accidents, which are an inevitable component of such operations, and the problems are many – starting with satellite monitoring of oil slicks to spill cleanup and identifying culprits in pollution.

Published on May 22, 2013 by Anna Kireeva, translated by Charles Digges 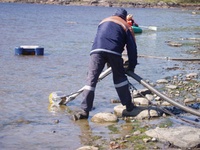 These were the issues discussed at a two-day seminar in Murmansk last week, which ended with large-scale theories on how to liquidate oil spills.

In order to define the direction of an oil slick, the currents of the water system in which it is located need to be specifically understood – and there is a hobbling lack of knowledge in this area in Northwest Russia. For example, the last mapping of currents in the comparatively narrow Kola Bay was undertaken during Soviet times in 1972, which also has bearing on the currents in the Barents Sea – the prime real estate for possible drilling activities.

“I don’t think the current schematics of Kola Bay completely correspond to the truth anymore,” Yelena Siekkenen, the Murmansk Regional head of the Federal Agency on Hydrometeorology and the Environment (RosGidroMet) told the conference. “Unfortunately, RosGidroMet cannot model the behavior or oil spills.”

Aside from this, in order to understand how oil slicks behave not only in water bodies, but also in icy conditions, how far they spread, and how much petroleum product settles on the ocean floor, the chemical make-up of these petroleum products need to be understood. And there remains one big hurdle to this: according to current and extremely sparse ecological legislation, vessels are not obligated to provide samples of fuel and hauled oil cargo.

As such, owners and captains are in no hurry to voluntarily provide examples of the petroleum products they carry, as this information would make culprits in oil spills easily identifiable.

Yet, according to Igor Kotyash, a state inspector with the Northwest Federal District office of the Ministry of Natural Resources and the Environment, there are many examples of assigning blame for both oil slicks as well as petroleum dumps into water bodies.

Satellite monitoring is usually used for such purposes. The Moscow area ScanEx research and development firm has been engaged in satellite imaging for more than two decades. According to the company’s leading specialist Natalya Yevtushenko, ScanEx satellite date led in 2008 to the apprehension of a vessel responsible for polluting the Black Sea.

It’s no mystery that oil slicks across great swathes of the surface of Kola Bay are blamed on Russian Northern Fleet naval vessels, and at the Murmansk conference, fleet representatives declined to draw the curtains of military secrecy, and were instead open.

Yelena Busyreva, a representative of the ecological service of the Northern Fleet, described ways in which it was addressing environmental pollution problems.

Busyreva said thatin 2009, the Fleet received a special cutter called the Grebeshok, which has onboard unique equipment for localizing oil spills, an automatic system for measuring hydro-chemical and physical parameters of the water environment and video monitoring systems. The Grebeshok also boasts apparatus that is able to establish oil slicks from a considerable distance, a system for constant water extraction, and many other advanced systems.

The downside, however, is that all of these high-tech devices installed on the Grebeshok  four years ago have yet to be employed: The financing for it is simply lacking. The vessel is therefore only used for visual observation.

“At the moment, we can only visually constitute spills,” said Busyreva.

Even when the Grebeshok establishes a spill however, the information goes no further that the Northern Fleet’s environmental service and its planning and coordinating division.

As such, development of the Russian Arctic shelf has not begun, and the most important water artery in the Murmansk Region, Kola Bay, is covered with oil film that is so thick that it is easily visible to satellites. And what to do with these slicks so as to stem further pollution – this is a question that remains without a clear answer.

As a result, there is already a deepening problem of hydrocarbon build ups in enormous quantities along the sea floor of Kola Bay. These are the same petroleum products spilled by vessels who opted to hush them up to evade responsibility. As a consequence the oil is just coating the bottom of the sea.

“Russia lacks normative rules on the contents of hydrocarbons on the sea bed, but these values we have are significantly higher that those of our closest neighbors,” said Alyona Ustinova, a specialist with the center for environmental monitoring of the Murmansk Region Administration of Hydrometeorology and Environmental Monitoring. “Thus, abroad, this value comes to approximately 0.05 milligrams per gram, while in many areas in the Kola Bay, this value is as high as 1.7 milligrams per gram.”

This is the second in a series of articles on oil ambitions on Russia’s Arctic shelf.