The Russian Federal Service for the Supervision of Natural Resources Usage (Rosprirodnadzor) has reported that state oil giant Rosneft is by far the worst polluter in terms of oil spills in the most important land-based field it operates in northern central Russia, according to documents obtained by Vedomosti newspaper. 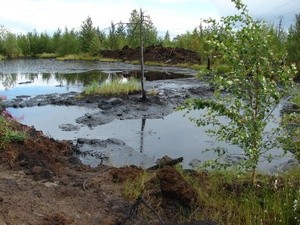 The report, released last week, singled out state-owned Rosneft’s operations in Western Siberia’s Khanty-Mansi Autonomous Region at the mouth of the Ob River, as being responsible for the 2,727 – or 75 percent – of the oil spills in the region in 2011.

The region is Russia’s biggest oil producer, supplying 51 percent of the country’s petroleum.

Rosneft has shared a close relationship with Norway’s Statoil and since May, when the two state-owned oil giants inked a deal to explore oil fields over hundreds of thousands of square kilometers in the Barents Sea region in the presence of then President-elect Vladimir Putin.

The deal begs the question as to how the Norwegian pubic might react to Statoil’s participation in future projects with a company that has such an abysmal environmental record stretching well beyond the confines of Khanty-Mansi Autonomous Region (or KhMAO as it is known in its Russian acronym).

Rosneft’s activities in the Far-East Sakhalin Islands have since the early 2000s caused such severe ongoing environmental devastation that Russian environmental groups have petitioned the Russian government to block Rosneft from being a sponsor of the 2014 Olympic Games in Sochi.

Statoil as part of a management reshuffle earlier this month gave back to Russian gas giant Gazprom its 24 percent share in the notorious Shtokman gas condensate field in the Barents Sea – a move that was greeted warmly by the Norwegian public, and gained Statoil shares two points on the Norwegian stock exchange.

While Statoil spokesman Bård Pedersen told Bellona that “we are still negotiating with Gazprom to find a way forward to profitably develop the Shtokman phase 1 project,” it was clear from Norwegian press reports that the country was glad Statoil had for the time being divested from the environmentally dicey venture.

The foreign parters in the Shtokman project are expected to be finalized at Shtokman Development AG’s board meeting on August 30, Russian news reports have indicated. Gazprom is said to be heavily favoring the inclusion of Shell in the project, offering Statoil, which has the new May deal to fall back on, a clean exit from the Shtokman project, Russian media have speculated.

Pedersen referred comment on Rosneft’s environmental work to Rosneft itself – which has failed to respond to respond to numerous comment requests from Bellona.

“Rosneft’s dismal environmental record – as evidenced in this new report – has been public record for a decade, and they clearly have no regard for the Russian environment,” said Bellona President Frederic Hauge.

“Statoil’s planned cooperation with Rosneft amounts to a Norwegian endorsement of Russia’s appalling and neglectful environmental policies,” he said, adding, “Statoil’s management knows full well what kind of oil recovery agenda Rosneft represents, and it is not one that is based on environmental or ethical grounds – but rather drill baby drill, the consequences be damned.”

Statoil satisfied that Rosneft cooperation to be to environmental spec

Pedersen nonetheless stressed that Statoil’s “joint exploration work will be conducted in compliance with relevant safety regulations and Statoil requirements.”

The May exploration deal, said Pedersen, is the only cooperative activity in which Statoil is participating with Rosneft.

The newspaper Vedomosti last week published the Rosprirodnadzor’s findings after the paper obtained the report from a source within the agency. The agency is currently leading a campaign to vet what information about the environment it makes public.

A description of the KhMAO offered by Yuri Trutnyev, former head of Rosprirodnadzor, who visited the area in April was dramatic.

“The ground is practically flooded with oil. We didn’t have to search for contaminated places, we had to search for territory that was not affected by pollution,” Trutnyev told Vedomosti. “Everywhere there were oil rivers, lakes puddles, carelessly abandoned remains of accidents.”

One of the principle dangers of such prolific oil spills – aside from the swathes of land they have left destroyed –  is that oil slicks will leak from land into the Ob River and into the fragile ecosystems of the Barents and Kara Seas.

The report notes that the total number of oil spills in the KhMAO caused by the four companies that work it has fallen from 4797 in 2009 to 3624 in 2011, a decrease of nearly a quarter.

According to the report, Lukoil has fared the best in combating spill over the three years studies, slashing its accident statistics by 2.5 times – from117 in 2009 to 46 in 2011. Rosneft, however, has dropped its accident rate by only 20 percent.

Rosneft’s 2727 spills 2011 are far and away the most caused by any companies working the KhMAO. The Rosprirodnadzor report established the state company as being responsible for 75 percent of all spills in the territory – 160 times greater than those posted by Surgutneftegaz, which in 2011 posted only 17 accidents.

The three-year study showed that there was a small decrease of 8.5 percent in the volume of oil spilled in KhMAO, from 5,781 tonnes in 2009 to 5289 tonnes in 2011. Rosprirodnadzor however did not provide a breakdown of which companies were spilling less volume, Vedomosti said.

Rosneft, however, did independently open its books on this figure for 2010, showing that it spilled 3737 tonnes – or 0.03 tonnes for every thousand tonnes recovered. TNK-BP also provided its own volume loss figures for 2010, showing a spill rate of 0.014 tonnes per thousand, or two times less than Rosneft. This is the only year for which such figures are available.

Lukoil and Surgutneftegaz have not published figures on lost tonnage.

According to a wide-ranging group of environmental organizations including the World Wildlife Fund and Greenpace, Rosneft’s activities in the Far East Sakhalin Islands have left behind environmental ruin.

Oil and other petroleum products are seeping in enormous quantities into salmon spawning rivers, gulfs and collecting along the shoreline of the Sea of Okhotsk, reports ecologysite.ru (in Russian).

TheTom River, for instance, has experienced such an inundation of petroleum products that it has pumped pollutants into the Gulf of Nyinsk north of Japan.

The contamination is impacting the livelihood of local fishermen and indigenous peoples.

Oil projects there – which have been a bone of environmental contention since the early 2000s – are also threatening the rare grey whale population of the region, the site reports. Rosneft – despite appeals to the government by environmental groups – have conducted seismic testing during the height of gray whale mating season, driving the species from its spawning grounds.

The groups have pointed out that the seismic testing has violated not only Russian environmental law, but Rosneft’s own stated policies of causing the least possible environmental damage during development of its projects.

The environmental groups have petitioned the government to exclude Rosneft as a partner in the 2014 Sochi Olympics. The company’s partnership status puts an extra environmental onus on the company, which environmentalists say it is fallen well short of, reported the site.