Christmas afternoon 1994 and the weather is stormy at sea. A tugboat is towing a 17,000-ton Soviet-era battle cruiser around Norway’s northern coast in Finnmark to India for dismantling. Snap – the tow line breaks, and after two days of fighting the squalls and wind, the cruiser Murmansk runs aground on the pebbles near Sørvær Island in the Hasvik municipality of Finnmark.

Published on May 15, 2012 by Ruth Lothe, translated by Charles Digges 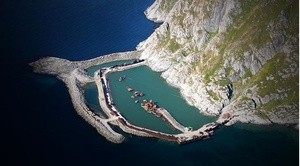 The luckless 211-meter-long Russian battle cruiser was being towed to India where it was to be dismantled on a beach. A strong winter storm pulled the cruiser free of it towline and wind and weather drove it ashore.

Now, 18 years later, the hulking wreck will finally be destroyed and its components recycled in a process that has international implications for dealing with often toxic shipwrecks populating the world’s seashores – a far more common circumstance than one might initially think.

Bellona early in the course of events

The Hasvik municipality would certainly like to see the last of the wreck. It was unknown whether the sealed vessel contained oil or other hazardous substances, and, on top, it was an eyesore.

Under normal circumstances, a ships owner is responsible for hauling wreck away, but in this case is was impossible to ascertain to whom the ship belonged. A salvage company that was contacted wanted between 60 million NOK and 100 million NOK ($10 million – 16.8 million) to haul the wreck away – a fortune for the financially destitute Hasvik municipality.

Bellona first made its views known about the situation a little over a week after the accident, on January 3, 1995. For Bellona advisor Christian Rostock told  Norwegian daily Aftenposten that, “If no one else turns up to remove the wreck, make the Norwegian Pollution Control Authority intervene,” he said. “A shipwreck is pollution. Period.” 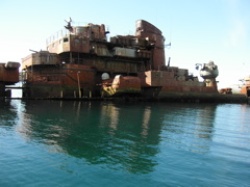 But the Norwegian Pollution Control Authority laid the responsibility on Hasvik’s doorstep and local authorities punted it back. So the battle cruiser continued to lie where it washed up.

Hundreds of liters of ship oil

On May 29, 2000, Nordlys, a regional newspaper, wrote of a new danger aboard the shipwreck – some 400 liters of ship oil, also called bunker oil. In conjunction with the Hasvik municipality had discovered, among other things through the Murmansk-based firm Orante, that oil was indeed still on board. Bellona had also obtained the inspection report that was made just prior to the Murmansk embarking on its final jouney from Sayda Bay – a storage facility for the hulls and reactor compartments of nuclear derelict submarines – on the Kola Peninsual in December 1994.

According to the original documents, the vessel contained about 100 tons of sulfur-containing heavy oil in its main tanks, almost 110 tons in its service tanks, 140 tons in and around the tank and 30 tons in its diesel tanks.

Sulfur containing heavy oil is a serious threat to the environmental should it leak. But little happened as the ship continued to rust on the shore.

In 2007, Veolia/Norwegian Recycling and its then-chairman Olaf Brastad went to Sørøya  Island to inspect the ship. They took samples with pincers of various objects such as cables, junction boxes and paint, all that was available. The analyses of the samples showed that there was much more hazardous waste on board than oil, including heavy metals, PCBs, brominated flame retardants and other hazardous substances.

The tests also showed that there was radioactivity in individual items aboard the ship, and the pressure on the authorities to remove the vessel increased.

A meeting between Bellona, Veolia and the Hasvik municipality and its mayor, Eva Husby, concluded with an agreement to work in partnership to remove the Murmansk and arrange a public meeting for Hasvik residents.

“The municipality was very pleased that we had committed ourselves in this, because since 1994 the ship had been there simply ‘forgotten,’” said Brastad, now Bellona’s senior advisor on industry and waste.

On August 1, 2008, Aftenposten published an article about the radioactive materials aboard the Murmansk that Bellona and Veolia had dicovered and brought in for analysis. The material was moved to Bærum to investigate possibilities for its recycling. Media interest boomed with the discovery of radioactivity aboard the derelict ship, and Brastad did what he could to bang the drum loud enough that decision makers would hear it via Aftenposten.

“The cruiser Murmansk is lying on pebbles in the middle of a tourist paradise full of pollutants,” Brastad told the paper at the time.

“Now that it turns out that there is also radioactivity in the waste, the problem will not get any smaller. It is just a scandal that no one has done anything about this,” he said, adding that, “This is an issue that has been forgotten for too long. We are now trying to show that pollutants, heavy metals and radioactivity are in the wreck. It is unbeleivable that this has been lying there for 15 years. This would never be accepted in the Oslo Fjord,” Oslo’s habor, said Brastad.

The government takes a turn

The weight of public opinion increased throughout the month of August and led to the Fisheries Minister Helga Pedersen taking action. Norwegian news wire NTB wrote in August that the Minister had decided that the ship would be destroyed whether the samples from August detected hazardous substances and radioactivity or not.

Bellona is pleased to have achieved resolution of the issue and Bellona President Frederic Hauge is quoted in the article, saying, “ We are very happy today. This is the kind of dynamisism we need.”

“Many politicians have avoided pursuing a final resolution to this matter, and I have every respect for the government as it now turns away from that,” Hauge continued. “This is a great victory for the people of Hasvik and shows that local involvement in environmental matters is of use.”

AF Decom AS won the tender for dismantlment in 2009. The job was priced at NOK 328 million. In addition, scrap iron which in itself represents great value, will come of the scrapping works.

The wreck should have been removed in 2011, but the relocation will not be completed until 2013, said AF Decom. The reason for the apparent delay is the dismantlement method that was adopted. It is a thorough and environmentally sound method, and Bellona is pleased that it was selected.

A breakwater has been built around the ship and the waer inside pumped out so the ship is essentially in dry-dock. Only when the vessel is on dry land can dissassembly be completed.

Sealing the breakwater, meanwhile, is no easy task.

“It’s like sealing a leaky bathtub, said Øyvind Omnes, project manager for the dismantlement AF Decom is performing in remarks to NRK television in October 2011.

Work was not expedited when half the breakwater was washed away in a storm in 2010.

“We are certain we will get this done. We will not leave Sørvær Island before the wreck is removed,” Omnes told NRK.

The secrets of dry-dock

In April this year, AF Decom finally managed to pump out the last drops of water in the hollow surrounding the ship, and dismantling of all that is under the deck can begin. What lies beneath no one knows.

“We are very pleased to have made this breakthrough. It has been challenging,” said Omnes in remarks to Norway’s TV 2 on April 27.

“Now it will be very exciting to see what actually exists of hazardous substances on board.  There may be explosives and ammunition on board – no one can say.  Or there could be oil,” he said.

Having removed the wreckage from the beaches on Sørvær Island in a proper and environmentally sound manner is now finally becoming a reality. Aesthetics are also a big factor in this scenic area, and the Murmansk government must take responsibility for a large piece of garbage.

“How can the government be responsible for its Keep Norway Clean campaign and ask people to pick up garbage in the water or the roadside if the authorities themselves do not pick up the big trash,” said Brastad in recent remarks.

Bellona looks with pride at the outcome of its many victories, albeit in close collaboration with several other parties:

“We are extremely pleased that this story seems to finally be reaching its end, but it would not have happened without the pressure and the good cooperation between local authorities, Veolia / Norwegian Recycling and Bellona,” ​​said Brastad.

“The destruction of Murmansk has set a standard for the treatment of hazardous wrecks,” said Sigurd Enge, marine advisor for Bellona. “It is better that it takes some time and is done properly than that it be done quickly in the wrong way. This is so long-term management of our coast to be continue.”

Over 30 dangerous shipwreck remains along the Norwegian coast (in Norwegian).