Vis menyen
Bellona.org > Latest News > Fossil fuels > Oil > European offshore safety meeting: “It’s when we think we have everything under control that we are the most vulnerable”

European offshore safety meeting: “It’s when we think we have everything under control that we are the most vulnerable”

BRUSSELS – “We need common minimum EU rules for offshore safety,” said Frederic Hauge, president of The Bellona Foundation, on behalf of the environmental movement at the Commission’s stakeholder meeting on 31 January for the proposed regulation for offshore safety. 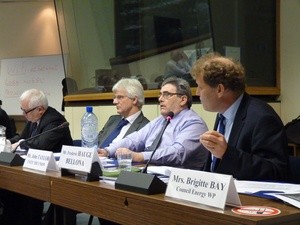 The proposal from October 2011 was a result of the 2010 oil spill in the Gulf of Mexico. At the 31 January meeting, environmental NGOs, industry, trade unions and regulators were invited to comment on the proposal. Kevin Myers, deputy CEO of the UK regulator, the Health and Safety Executive, said the proposal answered well the questions of “why, what, when and who” but that more time was needed to get the “when” and the “how” of the regulation right.

Industry and some trade union representatives claimed that the current North Sea safety regime was so good that it should not be forced to change as a result of EU regulation – in other words that a deficient safety regime was an issue only for the Mediterranean and the Black Sea, according to John Taylor of “Unite The Union” from the UK.

Myers from the Health and Safety Executive responded by pointing out that “it’s when we think we have everything under control that we are the most vulnerable.” 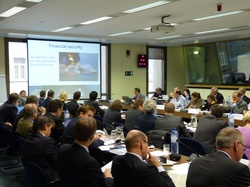 Hauge gave the Commission compliments for core parts of the proposal such as the fact that it is a regulation that has to be directly transposed into national law, that risk assessments are made compulsory for each drilling and that major hazards reports for each project have to be assessed and accepted by competent authorities.

He said further improvements were needed notably to reflect the need to ensure sufficient staff with the required skills and competence is available on board offshore installations. Other suggestions by Bellona and other NGOs include the need for financial security for all offshore drillings, specific requirements for Arctic and other harsh conditions, extension of criminal liability to oil spills as well as the application of some requirements of the regulation also to European companies operating in other parts of the world.

Frode Alfheim from the Norwegian trade union Industri Energi claimed that a heavily unionised offshore sector was a safety guarantee and that an EU regulation was not required.  The head of unit in the Commission’s DG Energy, Jan Panek, responded by referring to the Gullfaks accident in 2010:

“I know of an accident in your country, where the local regulator says that for a while it was just a coincidence that nothing more serious resulted from the presence of gas on the platform. So please let’s keep it to the facts.”

The recurring criticism of the proposed regulation was that a shortage of skills to implement an EU regulation would divert resources from actual safety work to paperwork.

“We have heard a very good description of the industry: There is a lack of people with the right competence. But that is an argument for more regulation. The Commission proposal should require that the right people with the right skills are on board platforms. In Norway, worker representatives concerns about this were not listened to. The Petroleum Safety Authority said “go drilling”, Statoil drilled and the Gullfaks accident happened,” Hauge said.

“Those who don’t want the regulation have to say why and how it won’t work, not only that they don’t want it. We believe that none of our arguments have been invalidated,” said Panek.