Halliburton knew the cement mixture it used in BP PLC’s ill-fated well in the Gulf of Mexico was unstable two months before the April 20 blowout that triggered the worst accidental oil spill in history, according to the staff of the presidential commission investigating the spill.

Published on October 28, 2010 by Charles Digges 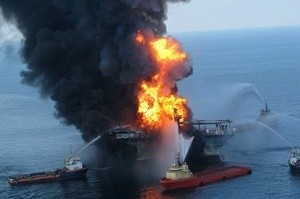 Documents from Halliburton show that before it started pumping cement into the wellbore on April 19 and 20, the company knew the results of three separate laboratory tests on the cement showed that the mixture did not meet industry standards, the commission’s staff wrote today in a letter to the seven-member presidential panel, which was distributed to US media outlets.

Today’s announcements by the commission represent its first finding of responsibility for the April blowout and subsequent explosion aboard  Deepwater Horizon rig, operated by BP on lease from Transocean, that killed 11 workers.

The news dovetails with ever worsening human health reports from the Gulf of Mexico, where independent investigations are turning up more and more people ill from BP’s prodigious use of the oil dispersant Corexit.

Dr Riki Ott, a toxicologist and marine biologist who extensively chronicled dispersant related illnesses after the Exxon Valdez Spill in 1989, said of the situation in the Gulf that, “People are already dying from this… I’m dealing with three autopsies’ right now,” she said, adding, “I don’t think we’ll have to wait years to see the effects like we did in Alaska, people are dropping dead now.”

Halliburton knew cement would not hold

As for Halliburton, the commission staff determined the company had conducted three laboratory tests that indicated that the cement mixture did not meet industry standards.

The result of at least one of those tests was given on March 8 to BP, which failed to act upon it, the panel’s lead investigator, Fred H. Bartlit Jr., said in his letter delivered to the commissioners on Thursday.

Another Halliburton cement test, carried out about a week before the blowout of the well on April 20, also found the mixture to be unstable, yet those findings were never sent to BP, Bartlit found.

Although Bartlit does not specifically identify the cement failure as the sole or even primary cause of the blowout, he makes clear in his letter that if the cement had done its job and kept the highly pressured oil and gas out of the well bore, there would not have been an accident.

“We have known for some time that the cement used to secure the production casing and isolate the hydrocarbon zone at the bottom of the Macondo well must have failed in some manner,” he said in his letter to the seven members of the presidential commission. “The cement should have prevented hydrocarbons from entering the well.”

The failure of the cement set off a complex and ultimately deadly cascade of events as oil and gas exploded upward from the 18,000-foot-deep well. The blowout preventer, which sits on the ocean floor atop the well and is supposed to contain a well bore blowout, also failed.

In a largely self-serving and finger-pointing internal investigation released in the late summer, BP identified the faulty cement job as one of the main factors contributing to the accident and blamed Halliburton, the cementing contractor on the Macondo well, as the responsible party. Halliburton has said in public testimony that it tested and used a proper cement formula on the well and that BP’s flawed well design and poor operations caused the disaster.

Cathy Mann, a Halliburton spokesperson, said Thrusday the company was reviewing the panel’s findings and would provide comment later Thursday, but by early evening Thuno additional comment had been forthcoming.

The commission obtained from Halliburton samples of the same cement recipe used on the failed well, including the same proportion of nitrogen used as a leavening agent and a number of chemicals used to stabilize the mixture. The cement slurry was sent to a laboratory owned by Chevron for independent testing.

The mixture failed nine separate stability tests designed to reproduce conditions at the BP well and did not pass any, according to Chevron’s test results, which were returned to the commission this week.

“Although laboratory foam stability tests cannot replicate field conditions perfectly,” Bartlit’s letter said, “these data strongly suggest that the foam cement used at Macondo was unstable. This may have contributed to the blowout.”

One and a half gallons of the actual mixture used on the doomed BP well survived the accident and are being held as evidence in ongoing criminal and civil investigations.

Shortly before technicians began pumping cement slurry down the well on April 19, Halliburton conducted one last test of the cement slurry. The company changed some of the conditions of the test, and appeared satisfied with the result, although those findings were not communicated to BP until after the well explosion, the commission found.

The commission concluded: “Halliburton may not have had — and BP did not have — the results of that test before the evening of April 19, meaning that the cement job may have been pumped without any lab results indicating that the foam cement slurry would be stable.”

Further, the panel found, “Halliburton and BP both had results in March showing that a very similar foam slurry design to the one actually pumped at the Macondo well would be unstable, but neither acted upon that data.”

The commission, appointed by President Obama in late May, is led by Bob Graham, the former governor and senator, and William K. Reilly, a former administrator of the Environmental Protection Agency.

While federal investigators are closing in on the chain of events that led to the world’s most massive accidental oil spill – the largest spill being that which was initiated when Iraqi troops invaded Kuwait in 1989, dumping 240 million gallons of crude into the ocean – medial professionals are dealing with staggering outbreaks of pulmonary and bronchial illnesses in the states of Alabama, Mississippi, Louisiana and the Florida panhandle.

“The dispersants used in BP’s draconian experiment contain solvents such as petroleum distillates and 2-butoxyethanol,” Dr Ott told Al Jazeera, which recently published an extensive report on dispersant related illnesses in the Gulf of Mexico.

“Solvents dissolve oil, grease, and rubber,” she continued, “Spill responders have told me that the hard rubber impellors in their engines and the soft rubber bushings on their outboard motor pumps are falling apart and need frequent replacement.”

“Given this evidence, it should be no surprise that solvents are also notoriously toxic to people, something the medical community has long known,” Dr. Ott added.

Dr Ted Schettler warns that solvents can rapidly enter the human body. They evaporate in air and are easily inhaled, they penetrate skin easily, and they cross the placenta into fetuses. For example, 2- butoxyethanol (in Corexit) is a human health hazard substance; it is a fetal toxin and it breaks down blood cells, causing blood and kidney disorders.”

Even the federal government has taken precautions for its employees. US military officials decided to reroute training flights in the Gulf region in order to avoid oil and dispersant tainted-areas.

BP has admitted to using at least 1.9 million gallons of widely banned toxic dispersants, which according to chemist Bob Naman, create an even more toxic substance when mixed with crude oil. And dispersed, weathered oil continues to flow ashore daily.

Naman, of the Analytical Chemical Testing Lab in Mobile, Alabama, has been carrying out studies to search for the chemical markers of the dispersants BP used to both sink and break up its oil.

According to Naman, poly-aromatic hydrocarbons (PAHs) from this toxic mix are making people sick. PAHs contain compounds that have been identified as carcinogenic, mutagenic, and teratogenic.

Fisherman across the four states most heavily affected by the oil disaster – Louisiana, Mississippi, Alabama, and Florida – have reported seeing BP spray dispersants from aircraft and boats offshore.

“The dispersants are being added to the water and are causing chemical compounds to become water soluble, which is then given off into the air, so it is coming down as rain, in addition to being in the water and beaches of these areas of the Gulf,” Naman added.

“I’m scared of what I’m finding. These cyclic compounds intermingle with the Corexit [dispersants] and generate other cyclic compounds that aren’t good. Many have double bonds, and many are on the EPA’s danger list. This is an unprecedented environmental catastrophe.”