UPDATE: BP’s Suttles admits that top kill is most recent in string of failures to stop Gulf leak, and options are running short

NEW YORK – Speaking at a news conference at Port Fourchon Beach in Louisiana, Doug Suttles, BP’s chief operating officer, said that attempts to plug the oil leak with a mixture of mud and debris – the company’s most ambitious effort yet to stop the spill – had done nothing to stem the volcano-like spew of oil from the site of the Deepwater Horizon leak in the Gulf of Mexico.

To US administration officials, this means that the chances of completely stopping the flow of oil into the estimated 20 million gallons of crude that has been released by BP in the Gulf of Mexico will most likley not stop for another two to three months.

Earlier in the afternoon, a technician speaking on terms of anonymity with various media, including Bellona Web, New Orlean’s Times-Picayune, the New York Times and the UK’s telegraph had said the top kill effort was failing and that BP executives would announce a major change of tactic.

Suttles had earlier Satuday denied the technician’s information, but by 5:00 p.m. US EDT, Suttles took to the microphones to announce that, “I don’t think the amount of oil coming out has changed. Just by watching it, we don’t believe it’s changed.”

He was referring to video feeds provided today by the the Skandia Neptune, a Norwegian vessel, showed the spew had turned from muddy brown to black, indicating they top kill procedure –  a risky process that involves pumping drill mud into the blowout protector – may already have stopped, experts said.

“After three full days of attempting top kill, we now believe it is time to move on to the next of our options,” Suttles told reporters.

“I am disappointed that this operation did not work,” Tony Hayward, chief executive of BP, said in a statement. “We remain committed to doing everything we can to make this situation right.”

The top kill is the latest, if not most spectacular of failures in BP’s chain of failures to stop the leak. First, BP failed in efforts to repair the blowout preventer with submarine robots. Then its initial efforts to cap the well with a containment dome failed when it became clogged with a frothy mix of frigid water and gas. Efforts to use a hose to gather escaping oil have managed to catch only a fraction of the total spill.

Yesterday at 12:30 p.m local time, the videos from underwater were showing a brownish spew of drill mud and fluids.

The technician told various news outlets including Bellona Web after Suttles spoke that the “top kill” tactic – the best prospect for ending the devastating leak – has been unsuccessful and that BP would now need to look at other strategies. 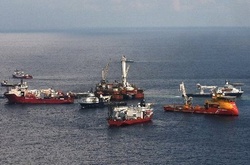 “It seems at this stage that the ‘top kill’ has not worked,” the source said. That means the crisis is now entering a new stage as BP exhausts its preferred solutions to plug the leak.

What was going on last night?

BP made a third, and apparently final, attempt Friday night at what is termed the “junk shot,” a procedure that involves pumping odds and ends like plastic cubes, knotted rope, and golf balls into the blowout preventer, the five-story safety device atop the well.  The manoeuvre is complementary to top kill.

But the technician inside BP’s efforts to kill the leak said that he company had last night deployed an underwater robot with a saw in an attempt to slice off the leaking pipe and place a cap and seal over the opening.

This would have been part of an effort known as “lower marine riser package cap,” or LMRP – something Suttles told reporters earlier today would be a possible next step should the top kill be deemed a failure.  The procedure involves cutting off the failed, leaking riser at the top of the Lower Marine Riser Package on the blowout preventer to get a clean-cut surface on the pipe.

Doug Suttles tells the press that the top kill effort has failed and that BP will now move on to the LMRP effort.

The cut wil be caped and that will then be attached a hos to siphon off some of the oil onto a tanker on the surface. The procedure should take some five to seven says, said Suttles, again emphasising that this was yet another procedure BP was undertaking that had never been tried at a depth of 5,000 feet before. While the procedure is underway, it could increase the flow of oil into gulf waters by 20 percent.

“As we speak, the team is assessing the results so far and trying to make a decision: should we continue with the operation, or actually should we Obamove to the LMRP cap?” Suttles told reporters.

BP spokesmen contacted Saturday refused to disclose if BP had already abandoned the top kill last night and begun to prepare for the LMPR.

Obama’s enviromental advisor, Carol Browner, Sunday told NBC’s meet the press that the US government was already “prepared for the worst scenario” that the leak might not be stopped before August. She said the oil spill is the worst environmental disaster the US has faced

BP began the risky top kill on Wednesday. The procedure involves pumping heavy drilling mud into the crippled well in a bid to stop the oil. It’s never been tried in 5,000 feet of water.

What went wrong with the top kill?

The technician who had been speaking with various media on the condition of anonymity said later Saturday that neither the top kill nor the “junk shot” came close to succeeding because the pressure of oil and gas escaping from the well was simply too powerful to overcome. He added that engineers never had a complete enough understanding of the inner workings of drill pipe casing or blowout preventer mechanisms to make the efforts work.

“Simply too much of what we pumped in was escaping,” he said.“The engineers are disappointed and management is upset,” said the technician. “Nothing is good, nothing is good.”

In practice, it now seems almost certain that the oil from the worst spill in American history is likely to continue to flow until a relief well is drilled – an operation expected to take several more weeks.

News of the latest setback came as it emerged that BP executives could face a criminal investigation into their actions.

Senior federal prosecutors and agents are taking the first steps toward a formal criminal probe. A high-level justice department team is assessing whether the company may have broken safety regulations before the disaster.

BP already faces a welter of civil damages lawsuits as a result of the April 20 explosion that killed 11 workers on the Deepwater Horizon drilling rig.

The investigators have been conducting interviews in Louisiana and warned attorneys for BP and Transocean, the rig’s owner, that they should retain all documents and other internal records relevant to the spill.

The company has been informed of the inquiry, which is a standard preliminary step before prosecutors decide whether to launch a criminal investigation.

What now for cleanup?

BP estimates it has nearly 2,000 workers already along the coast according to David Nicholas, a BP spokesman.  Suttles told reporters BP was somewhat hampered in its efforts to be aggressive by the delicate nature of the ecosystem.

“We don’t want to create more harm in doing the cleanup than the oil creates on its own,” he said.

Nevertheless, he added, BP was not only bringing in more people it was working on ways to get them to more inaccessible areas of the coast. He said they were going to start using tent cities and “flo-tels,” or floating hotels, to house workers closer to hard to reach marsh lands being covered with oil.

BP has been fighting a slick of 130 miles by 70 miles with burn-offs and chemical dispersants, but the first oil has started washing ashore in the fragile ecosystem of the bayou.

But what President Obama’s second highly choreographed visit to the Gulf for four-hours day did not show him was the most damaging impact on the waters of the Gulf of Mexico and those crucial wetlands.

“This is a disaster on many levels,” said Larry Schweiger, president of the National Wildlife Federation (NWF). “About 90 per cent of gulf fishing is dependent on these wetlands. Fish spawn here, blue crabs and other sea life which are a key part of the food chain rely on the marshes, the oyster and shrimp populations rely on healthy wetlands.”

The disappearing bayou is also a crucial protective barrier from storms for communities such as New Orleans. For a population still recovering from Hurricane Katrina, the implications are understood.

Deep-water cameras sent out on an NWF boat last week showed reefs that should be teeming with fish were near devoid of life but thick with oil globules. Scientists believe much of the plume has never even reached the surface.

“When things are this bad, the larger fish get out of town,” said Dr Martin O’Connell, director of fish research at the University of New Orleans. But the oysters and shrimp in polluted areas will not have escaped, nor will smaller fish and other organisms that rely on the wetlands for survival. “The impact on the food chain will be felt for many years.”

BP has laid thousands of miles of absorbent booms in an operation commanded by the US Coast Guard. But in many cases, the barriers are already soaked with oil and were apparently put down too late to protect the marshes.

The US Geological Survey on Thursday estimated that between 12,000 and 19,000 barrels has spilled into the gulf each day after the rig explosion on April 20th.

The figure is significantly higher than the previous 5,000 barrels per day estimate reached by government oceanic scientists and used by BP. It translated to between 18 and 28 million barrels – exceeding the 11 million gallons that gushed out of the Exxon Valdez tanker off Alaska in 1989.