VENICE, Louisiana – Oil industry representatives gathered here at ground zero for the land fall of the biggest oil spill in US history in decades have told Bellona Web that the most likely cause of the blowout at a British Petroleum operated rig was a gas bubble rising with enormous force from the high pressure well, destroying the well head. 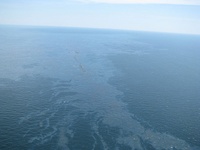 They have said further that little could have been done to avoid this: The Deepwater Horizon oil rig that caught fire on April 20 and exploded and sank on April 22, was not equipped with a remote-control shut-off switch – called an acoustic switch – which immediately shuts down wells during blow outs, said Bellona President Frederic Hauge.

This differs from two other major oil-producing nations, Norway and Brazil, which both require an acoustic switch for their offshore rigs. Norway has had acoustic triggers on almost every offshore rig since 1993.

US drilling regulations do not require these acoustic switches.

The revelations come as affects of the spill in began reaching into precious shoreline habitats along the coast of the Gulf of Mexico Monday morning, and BP admitted that its environmental impact study for Deepwater Horizon downplayed the possibility of disastrous accident.

“The sort of occurrence that we’ve seen on the Deepwater Horizon is clearly unprecedented,” BP spokesman David Nicholas told the Associated Press. “It’s something that we have not experienced before … a blowout at this depth.”

How to cap the massive blowout, which is leaking 200,000 gallons a day, if not more, remain elusive as do ways to cap the geyser of oil 5,000 feet, or 1,500 meters, below the surface of the Gulf of Mexico, remain elusive.

US Coast Guard estimates put the amount of oil that has spilled since the Deep Horizon oil rig initially caught fire on April 20 at 1.6 gallons. The explosion killed 11 workers, and the amount of oil that continues to leak from the deep fissure at the bottom of the Gulf threatens to surpass the 11 million gallons that spilled during the Exxon Valdez accident off Alaska’s southern coast in 1989 within weeks.

The US considered requiring the remote-controlled shut-off mechanism several years ago, but drilling companies questioned their cost and effectiveness, according to the Interior Department’s Minerals Management Service, which oversees offshore drilling.

The agency says it decided the remote device wasn’t needed because rigs had other back-up plans to cut off a well. The UK, where BP is headquartered, doesn’t require the use of acoustic triggers.

Mike Papantonio, an environmental lawyer, said on the popular American radio programme, the Ed Schultz show, that former Vice-President Dick Cheney’s shadowy energy programme decided that the switches, which cost $500,000, were too much a burden on the industry.

“(The acoustic switch) is a failsafe that shuts the flow of oil off at the source,” said Papantonio in the April 30 broadcast.

“They cost only about half a million dollars each, and are required in off-shore drilling platforms in most of the world…except for the United States. This was one of the new deregulations devised by Dick Cheney,” he said.

Hauge also noted from conversations he has had with oil industry representatives gathered here that booms to corral oil that are being used in the clean-up effort on seas that continue to be stormy are substandard to ones used in Norway.

But Hauge was also quick to point out that even Norwegian booms are not 100 percent effective in rough seas.

Meanwhile, clean up efforts are being hampered by coagulation of oil into hard balls caused by the use of highly toxic chemical dispersants, likely of the Corexit brand, that contain 2-butoxyethanol, or 2-BE, said industry experts.

The coagulation of the oil is making it difficult for skimming ships that are endeavouring to essentially shovel oil off the surface of the Gulf’s waters by causing clogs.

2-BE is also known to cause heath dangers to clean up workers and wild life alike. Chemical dispersants can concentrate leftover oil toxins in the water, where they can kill fish and migrate great distances.

Information sheets on Corexit that have been given to workers indicate that the 2-BE in the dispersant causes headaches, vomiting and reproductive problems at high doses. 2-BE has also been documented to cause the breakdown of red blood cells, leading to blood in the urine and feces, and can damage the kidneys, liver, spleen and bone marrow of humans – effects not included on the information sheet for workers.

“There is a chemical toxicity to the dispersant compound that in many ways is worse than oil,” said Richard Charter, a foremost expert on marine biology and oil spills who is a senior policy advisor for Marine Programmes for Defenders of Wildlife and is chairman of the Gulf of the Farallones National Marine Sanctuary Advisory Council.

“It’s a trade off – you’re damned if you do damned if you don’t –  of trying to minimize the damage coming to shore, but in so doing you may be more seriously damaging the ecosystem offshore,” he told the web publication Truthout.

Several clean-up workers on the Exxon Valdez spill died due to their exposure to 2-BE, as documented by Alaska oil spill expert Riki Ott in her book “Sound Truth and Corporate Myth$: The Legacy of the Exxon Valdez Oil Spill.”

In exploration documents and an environmental impact analysis compiled by BP in 2009, the company concluded that an accident leading to a massive spill of that could effect beaches, fish and mammals was unlikely or even impossible.

According to the plan for the Deepwater Horizon well, filed with the federal Minerals Management Service, BP repeatedly said , as quoted by AP, that it was “unlikely that an accidental surface or subsurface oil spill would occur from the proposed activities.”

Robert Wiygul, an Ocean Springs, Mississippi-based environmental lawyer and board member for the Gulf Restoration Network, said he doesn’t see anything in the document suggesting BP addressed the kind of technology needed to control a spill at that depth of water.

“The point is, if you’re going to be drilling in 5,000 feet of water for oil, you should have the ability to control what you’re doing,” he said.

Official spinning wheels on how to cap flow

Amid increased fingerpointing, efforts sputtered to hold back the spill, while the government desperately cast about for new ideas for dealing with the growing environmental crisis. President Obama halted any new offshore drilling projects unless rigs have new safeguards to prevent another disaster, and Sunday met with officials in Louisiana.

They also are drilling a relief well in hopes of injecting mud and concrete to seal off the leak, but that could take three months.BP PLC chairman Lamar McKay told ABC’s “This Week” yesterday that he can’t say when the well a mile beneath the sea might be plugged. But he said he believes a 74-ton metal and concrete box — which a company spokesman said was 40 feet tall, 24 feet wide and 14 feet deep — could be placed over the well on the ocean floor in six to eight days.

Company spokesman Bill Salvin said Sunday that the first of three boxes is nearly done. It’s being built in Port Fourchon, Louisiana by a company called Wild Well Control. Another BP spokesman, Steve Rinehart, said the oil will flow into the chamber and then be sucked through a tube into a tanker ship at the surface.

Bellona President Hauge said that this strategy is one that may work, depending on the pressure of the oil that is being released from the borehole at the bottom of the ocean.

Further east along the Gulf Coast, officials are getting increasingly worried and frustrated.

“I’ve been in Pensacola and I am very, very concerned about this filth in the Gulf of Mexico,” Florida Governor Charlie Crist said at a fundraiser for his US Senate campaign Sunday night, AP reported.

“It’s not a spill, it’s a flow. Envision sort of an underground volcano of oil and it keeps spewing over 200,000 gallons every single day, if not more,” he said.

None of us have ever had experience at this level before. It ain’t good,” said Bob Love, coastal and nongame resources administrator with the Louisiana Department of Wildlife and Fisheries. “The longer it goes, the more fish and wildlife impacts there will be,” AP quoted him as saying.

BP pledges to pay for clean up

BP says it will pay “all necessary and appropriate clean-up costs” resulting from the blown-out oil well. In a fact sheet posted to the company’s website on Monday, BP said it took responsibility for the response to the Deepwater Horizon oil spill and says, “we will clean it up.”

The document says “BP will pay all necessary and appropriate clean-up costs.” The company says it will pay compensation for “legitimate and objectively verifiable” claims for property damage, personal injury, and commercial losses.

Yet at the same time, BP has been reprimanded by Alabama Attorney General Troy King to stop sending its representatives into the bayous – some of the most vulnerable wetlands as well as home to some of the states poorest residents – with $5,000 payoff agreements for those who agree to sign documents saying they will abstain from participating in lawsuits against the company.

More than 200 class action lawsuits have been filed against the company.