Grand Isle and other Louisiana bayou communities under oil siege

NEAR GRAND ISLE, Louisiana – Oil slicks about a foot long and wide have been spotted on the beaches of the Grand Isle State Park in the middle of the Mississippi River Delta, and residents are being urged to stay inside tomorrow as air quality deteriorates over the course of the night.

The Deepwater Horizon rig run by BP exploded and sank about 60 miles southwest of the bayou communities in Louisiana, and the military has been working round the clock to lay booms and sandbags to keep oil leaking from the ocean floor from Louisiana’s precious marshlands and bayous, which are breeding grounds for thousands of species of animals. 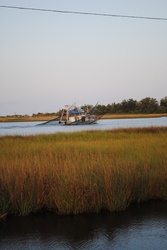 The oil discoveries here are extremely worrying to environmentalists, fishermen and politicians alike as they give some sign that the slick could be expanding westward as well as eastward, and this would cut off the possibility of any fishing in the gulf for this and several seasons to come.

Even Mississippi Congressman Gene Taylor, who has spent nearly three weeks trying to downplay the repercussions of the spill, told Bellona Web in an interview in Pass Christian Mississippi earlier on Monday that the gulf  “will take decades to recover.”

Today, Louisiana Gov. Bobby Jindal said 29 miles of Louisiana coastline have been hit by crude, meaning oil is managing to slide under the some 1 million miles oil boom surrounding the state.

Citing a briefing he had today with the National Oceanic and Atmospheric Administration (NOAA), Louisiana has been hit by oil on Grand Isle, Port Fourchon Beach, Trinity Island, Whiskey Island, Chandeleur Island, Racccon Island, and sheen has washed up in numerous bayou parishes at the mouth of the Mississippi River. Jindal ordered that booms be fortified by sandbags underwater.

Code of silence between workers and public

Asked what all the hubbub was about, Tim Jordan who runs the Tropical Motel said, “They haven’t let us much know about anything,” and motioned to a beach bungalow across the highway surrounded by national guard vehicles, some with gun turrets.

“I ask them how they are doing out on the beach and they say they are getting a tan while they change out of hazmat suits,” he said.  Indeed, many beaches in this area of the state’s surrounding marshlands and bayous have been entirely closed to the public.

Some local beach goers or disaster tourists have told Bellona Web that National Guard soldiers have even unholstered their weapons or brandished M-16 automatic rifles to deter their approach.

Twelve miles to the northwest in Port Fourchon, workers and reporters are only allowed on the beach in hazmat suits on guided tours. 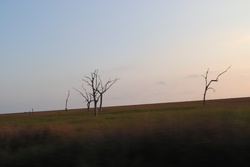 Ten miles to the west, in the bayou village of Cocodrie, workers were literally elbow deep in mud and crude.

It has been 27 days since the Deepwater Horizon rig run by BP exploded and sank, leaving behind a geyser a mile down on the ocean floor spewing anywhere from 5,000 to 70,000 barrels of oil a day.

After a series of failures to staunch the flow, BP yesterday managed to insert with robots one end of a mile-long tube into the shattered oil pipe with the goal of siphoning up some of the crude gushing into Gulf waters. Today, BP’s Doug Suttles reported that the siphoning system was picking up about 2,000 barrels of oil – or one fifth of what the Coast Guard estimates is leaking daily –  and transferring it to a tanker ship.

The US government is not impressed; a joint statement from Secretary of Homeland Security Janet Napolitano and Ken Salizar, Secretary of the Interior, said BP’s latest experiment was ‘not a solution to the problem.”

Monday, BP promised it would have the well sealed by next week, and also vowed not to drill it – though said the jury is still out on whether they would attempt to build another well to get at the estimated 10 million barrels of crude in the particular reservoir.

President Obama said he would establish a presidential commission by executive order, White House officials were quoted by news agencies as saying.

The officials, who spoke on condition of anonymity, said the commission would be similar to panels created to investigate the space shuttle Challenger disaster in 1986 and the nuclear accident at Three Mile Island in 1979.

It would also study oil industry practices, rig safety, regulation and governmental oversight, including the functions of the Minerals Management Service (MMS) – the agency responsible for regulating offshore oil drilling.

Senior MMS official Chris Oynes – who has been accused of becoming too close to the industry his agency monitors –  told reporters on Monday that he would step down at the end of this month.

On Monday, Rear Adm Peter Neffenger told the US Senate that the oil spill may reach Florida’s coastline, according to press reports.

Any oil that does wash up is likely to be in the form of tarballs which are a “little easier to manage”, the top coast guard official said in a testimony at the Senate Committee on Homeland Security and Governmental Affairs.

Rear Adm Neffenger also said that the government was closely watching whether the oil would be swept up into the “loop current” that moves around Florida.

“Currently it shows to be somewhere in the neighbourhood of 40-50 miles  from the southern edge of the spill,” he said.

Are the reported oil plumes really there?

Scientists said on Sunday they had found vast underwater plumes of oil, one 10 miles (16km) long and a mile wide, lending weight to the fears of those who believe the actual spill could be many times greater than the estimate of 5,000 barrels daily.

But Lamar McKay, President of BP America told Senators during continuing hearings that, “I think we ought to be cautious in terms of defining what plumes are out there and how they’re behaving.”

The NOAA cast doubt on the plume reports, saying no definitive conclusions had been reached because the findings were unverified. Members of the team who said they discovered the plume emphasised Tuesday in an email to The Los Angeles Times, that their results on the plumes are inconclusive.