BETWEEN PASS CHRISTIAN, MS AND BAYOU SAUVAGE, LA – New estimates from Purdue University in Indiana suggest that the volume of oil spilling into the Gulf of Mexico is more than 10 times than originally thought, as Seashore Coastal Assessment Teams (SCATs) have turned up tar balls on the mainland coast of Mississippi.

Tar balls turning up on Mississippi’s nationally protected beaches, said the SCAT team who found them, are a significant harbinger of worsening things to come in the next few days as the Deepwater Horizon rig’s well pipe continues to spew like a geyser into Gulf Waters.

The US Coast Guard originally estimated that 5,000 barrels a day was gushing from the broken pipe on the sea floor, but sophisticated scientific analysis of ocean bottom video made available Wednesday by the oil company BP shows that the true figure is closer to 70,000 barrels a day.

The figure of 5,000 barrels a day was hastily produced by government scientists in Seattle. It appears to have been calculated using a method that is specifically not recommended for major oil spills.

This means the oil spilling into the Gulf has already far exceeded the equivalent of the 1989 Exxon Valdez tanker accident in Alaska, which spilled at least 250,000 barrels or 11 million gallons of oil. The study was performed by Steve Werely, an associate professor at Purdue University, using a technique called particle image velocimetry.

The method is reported to be accurate within 20 percent, meaning the actual leak is between 56,000 barrles a day and 84,000 barrels a day. As shocking as the news may be, the figures were eventually bound to emerge as being far higher than Coast Guard estimates.

Studies performed by Dr. Ian MacDonald, an Oceanographer at Florida State University who is an expert in the analysis of oil slicks, released data to Bellona Web on May 1st indicating that the spill was at least 60,000 barrels per day.

“The government has a responsibility to get good numbers,” MacDonald said in an interview with Bellona Web on May 1st. “If it’s beyond their technical capability, the whole world is ready to help them.” 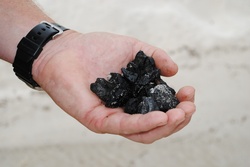 Indeed this was the sentiment professed by Todd Farrar of the Mississippi Department for Environmental Quality (MDEQ), one of a three member SCAT team whose responsibility it is to patrol local beaches and look for debris related to the oil slick.

Upon reaching Pass Christian’s pristine white sands, Farrar’s SCAT team had collected more than a dozen tar balls from the oil slick. The tar balls with Farrar’s team, however, differ significantly from those that have been found by Bellona Web and officials on Dauphin Island, Alabama, where their viscous, gloppy appearances caused an immediate invasion of hazmat workers from across the nation.

The tar balls collected by Farrar look far more like burnt glass or caramelized sugar. He postulated that the tar balls washing ashore on the 70 miles of Mississippi Gulf coastlnie are a hard, sharp offspring of BP’s night time oil burns at sea that fused crude and Corexit dispersant into their blackened glass chip form.

“These came across the bottom of the ocean, following currents,” said Farrar. “This is what sweet crude leaking at depth will do.”

The tar balls are toxic for marine life onshore and beneath the sea, and their trajectory toward land indicates oil may very well be following in their path, said Farrar.

Thus far, only the Gulf Islands and shores near the spill in Louisiana’s Mississippi Delta, such as the Chandeleur Chain, Breton Island and Fremason Island have been hit by actual crude. Mainland shores around Venice and Port Fouchon, Louisiana, have been hit as well, according to oil spill imagery from the National Oceanic and Atmospheric Administration (NOAA).

NOAA forecasts also show the slick heading further west to the nationally protected Atchafalaya Swamp – the largest swamp in the United States, where waters from the Atchafalaya river and the Gulf of Mexico meet.

Crack-down on speaking with the press

Farrar, a Mississippi state environmentalist, was the only one of his three person SCAT crew to speak – a somewhat remarkable fact given an apparent and suffocating clamp-down on clean-up workers and authorities against speaking to the media. 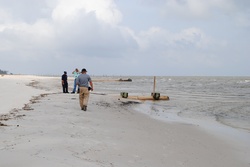 MacDonald and other scientists said the government agency that monitors the oceans, the National Oceanic and Atmospheric Administration (NOAA), had been slow to mount the research effort needed to analyze the leak and assess its effects.

Sylvia Earle, a former chief scientist at NOAA and perhaps the country’s best-known oceanographer, has said that she, too, was concerned by the pace of the scientific response to the leak.

Farrar argued that the after-response, however, has mobilised thousands of people from numerous states.

“The rescue effort has built up speed and magnitude,” he said.

For several days after the April 22nd explosion of the Deepwater Horizon rig, the government and BP claimed that the well on the ocean floor was leaking about 1,000 barrels a day.

A small organization called SkyTruth, which uses satellite images to monitor environmental problems, published an estimate on April 27 suggesting that the flow rate had to be at least 5,000 barrels a day, and probably several times that.

The following day, the government – over public objections from BP – raised its estimate to 5,000 barrels a day. A barrel equals 42 gallons, so the estimate works out to 210,000 gallons per day.

Louisiana bayous buckle down – with firepower if necessary

Travelling southeast of New Orleans down highway 90 – or the Old Spanish Trail to locals – from Bay St. Louis, Mississippi to the thick coastal Bayous of Louisiana, it was clear the state was taking no chances in letting oil into its precious Bayou Sauvage – a protected nature reserve – or any of its other wetland. 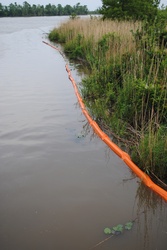 Amid the oaks and their low hanging moss, workers from the United States Environmental Service laid booms across the mouths of estuaries and creeks that led into the brackish interior. Their efforts were secured by the army, which parked Humvees at boom laying sites, preventing entrance to the press. 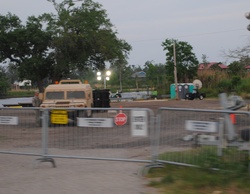 Rail thin fisherman Jeb Dupree, who was pushing a bike on whose seat he was balancing groceries from a general store with its hand painted sign four miles up a road, said he didn’t expect he’d be going out next season or the season after that. His deep Cajun drawl was nearly submerged under the hum of insects.

Feet from the road lay alligators as still as logs, and poisonous water moccasins sunned themselves in the Afternoon light dapples among the cattails.

“I ain’t expecting no crabs will much sell, or survive if oil gets up in here,” he said. When asked if he though BP would make restitution, he said, “I don’t know much about that, but whatever they give will be more than I got.”

But the bonhomie of this part of the country was still not crushed in the face of disaster. As he continued to push his bike up the road, darkened by low swamp trees and weeping boughs of leaves, he turned, smiled, tipped his straw hat and wished his visitors “Bon chance.”