VENICE, Louisiana – Bellona President Frederic Hauge called the Deep Horizon oil platform explosion and subsequent and increasing spill the “Chernobyl of the oil industry,” in remarks he made Monday at the Cypress Cove Marina in this Louisiana Gulf town, which is ground zero for clean-up operations – and the flash point for economic disaster that will be spreading across the coast with the slick. 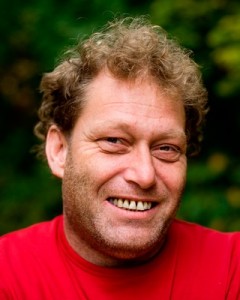 Hauge’s remarks come as estimated leakages from the British Petroleum drilled well have been set at some 100,000 gallons a day. Hundreds of reporters from around the world have gathered here to see how dire the consequences of the spill will be.

Hauge set sail later in the day with a group of journalists to survey the damage on the surface of the Gulf first hand. He said that the disaster has repercussions not only for the Gulf of Mexico, but for the oil industry worldwide.

So far, said Hauge, he has observed that local and federal authorities are largely powerless to influence BP in its initiatives to undertake clean-up operations, which it is mandated to do by US federal law.

Anger was articulated as far down the Gulf Coast as Gulfport, some 100 kilometres east of New Orleans.

“These guys went through Katrina, a recession and now this. How many more bullets are these people going to have to dodge?” he added.

Eleven days after the Deepwater Horizon platform exploded on April 22, BP has still not managed to block the uncontrolled and increasing leakage of oil.

Fish and wildlife are under increasing threat across a four state area, and dead sea life, such as sea turtles and birds have begun to wash ashore in Pass Christian Mississippi, a fishing and vacation community some 70 kilometres east of New Orleans.

The carcasses of 23 sea turtles have been found along Mississippi’s 70 miles of coastline, and have been retrieved for examination by the Institute for Marine Mammal Studies in Gulfport, said Moby Solangi, the group’s president and executive director. But Solangi noted that the group will not know if the deaths are a direct result of the spill until necropsies are performed.

Although this is the time of year when dead turtles are often found on the beach, Solangi said the number is more than double what they would expect. Twelve were found where City of Pass Christian Patrol Officer Gus Holliman has spent the last three days riding the beaches of coastal Mississippi, hoping not to find dead animals. 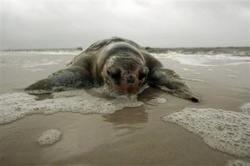 Katrina round two plus

The towns of the Mississippi coast were some of the hardest hit by Hurricane Katrina in 2005 and damage is still visible. In Pass Christian, surrounded on all sides by water, nearly two of every three buildings was destroyed. Only last February did construction on a new city hall begin, while the local police continue to operate out of trailers. The town is dotted with foundations where houses and businesses used to be

President Obama said during his Sunday visit to Louisiana  that his administration has mounted a “relentless response” to the oil spill.

But fishermen and locals Bellona Web spoke with today are fearing the worst.

“First came the hurricane, then this. This can kill all of us who have our livelihood here in southern Louisiana,” said a deeply distressed local fisherman.

“We see here how powerless one is when one must fight against oil spills and natural forces, “said Hauge speaking at Cypress Cove Marina.

“It’s a terrible blow and it’s difficult conditions. They have not done any cleanup work now,” Hauge continued.  Returning to his comparison to Chenobyl, Hauge said the spill would change attitudes toward offshore oil exploration when people understand the scale of the Gulf spill.

“The Chernobyl accident made nuclear policy inedible overnight in many countries,” he said.

Annicken Vargel reported from Norway, and Charles Digges reported and translated from the US.