The US House of Representatives passed Democratic-sponsored legislation Tuesday that would lift a longstanding ban long cherished by environmentalists within Democratic party on offshore oil drilling, opening most of the US coastline to exploration.

Published on September 17, 2008 by Charles Digges 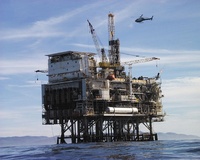 The House of Representatives, Congresses lower chamber, voted 236 to 189 in favor of the package, but the Democratic initiative may face a veto from the White House, news agencies reported.

The package proposed by Democrats would give states the option to allow drilling between 80 and 160 kilometers off their shores. Areas more than 160 kilometers from the coast would be completely open to oil exploration and drilling, Reuters reported.

The flip-flop represents a swift change in policy for the Democratic Party, which has routinely opposed lifting the offshore drilling moratorium for environmental reasons.

For their part, the Republicans pushed in this election season for offshore drilling, and much of the current presidential race has featured salvos from Republican hopeful John McCain’s camp that Democratic contender Barack Obama’s opposition to offshore drilling neglects the US need for energy independence.

In July 2008, President George Bush lifted the ban on offshore drilling that was put in place by the presidency of his father, George Herbert Walker Bush. The ban was imposed by the elder Bush in exchange for drilling rights for big oil in he oil-rich Arctic National Wildlife Refuge in Alaska.

As of today, the 1981 ban on offshore drilling in the US still remains in effect, making Bush the Junior’s unilateral lifting of the ban purely symbolic. But house Democrats have beat Bush to the punch to craft legislation fulfilling his wish.

The Democratic majority in Congress, therefore, seems to be taking the heat for the decision to keep or lift the ban off their candidate by bowing to the Realpolitik of eschewing environmental concerns in favor of gaining better footing on the road to the White House that ends in November.

Environmentalists, however, can still find solace in the Obama ticket for Obama’s personal opposition to offshore drilling, as well as his prospective administration’s staunch opposition to the Yucca Mountain nuclear waste repository, its general opposition to more nuclear power in the United States, and its open embrace of joining the world community in supporting technological and legislative initiatives aimed at curbing climate change.

Senate still to approve offshore drilling
Later this week, the Senate, Congress’s upper chamber, is expected to take up energy legislation that would expand offshore drilling, but not as much as the House, Reuters said.

Both chambers would have to reconcile differences between their bills before a final energy package could be sent to the White House to be signed into law. Time is running out for lawmakers to pass legislation as Congress is scheduled to adjourn on September 26th.

Democrats and Republicans change election year stripes
Until recently, Democratic leaders in Congress strongly opposed lifting the moratorium on offshore drilling, saying drilling would have only a small impact on gasoline prices in the immediate future.

But as gasoline prices shot to levels above $4 a gallon this summer, public opinion shifted in favor of offshore drilling. Republicans made removing offshore drilling moratorium a key campaign issue for their party in this election year – but Republican President George Bush may flush the initiative for partisan reasons amid a tight battle for the White House.

Bush administration derides its own long-cherished goals
The Bush Administration has called the Democratic initiative a “sham” and a “hoax,” news agencies said.

"At a time when American families are in need of genuine relief from the effects of high fuel prices, this bill purports to open access to American energy sources while in reality taking actions to stifle development," the White House said in a statement.

With the moratorium against offshore drilling facing expiration on September 30th, and voter sentiment changing, Democrats supported repealing the ban as part of a larger energy package, said Reuters.

Pork may put oil  drilling over a barrel
Republican opponents of the bill complain the bill does not include a revenue sharing plan, and states will not have financial incentive to open their coasts to exploration. The Republican Party, which usually steers clear of states’ affairs, is clearly seeking more pork for, and trying to curry the favor, for Republican governors of many coastal states with oil rich shelves.

Another Republican complaint is that the requirement that drilling occur at least 80 kilometers away from the US coast closes a great deal of the outer continental shelf where oil may be located, said Rueters.

Democrats countered that their package would open 319 million acres to 404 million acres off the Atlantic and Pacific coasts to drilling.

"This legislation is a result of reasonable compromise that will put us on a path to energy independence by expanding domestic supply," Democratic House Speaker Nancy Pelosi was quoted by Reuters as saying.