An explosion at one of Norwegian oil giant StatoilHydro’s North Sea oil platforms was narrowly averted after leaking crude gathered between the walls of the platform’s storage unit and the curtains surrounding its pilings. 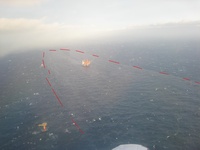 The near miss occurred at StatoilHydro’s Statfjord-A platform in the early morning hours of Saturday when one of the platforms three pilings sprung a leak of oil and gas that began to accumulate inside the curtained area, which formed the conditions for a possible explosion.

One hundred and fifty six people were evacuated from the platform and remaining personnel began to siphon off the oil and gas mixture. Some 1,200 cubic metres of oil and gas contaminated water washed into the sea.

Toward evening on Saturday, the situation was stabilized. All personnel returned to the platform, around which an 3 square kilometer oil slick had formed.

Emergency teams began work on boats to soak up the spilled oil.

The Statfjord-A platform was in the news earlier in December when it became the flashpoint for Norway’s second largest oil spill ever. During that event, some 4,400 cubic metres of crude oil spilled into the sea.

"StatoilHydro has spent significant funds on lobbying and advertising campaigns, but they didn’t bother at all with safety," he said.

"After the December accident authorities discovered eight serious safety regulation infractions. It will be interesting to find out how many they discover this time," Hauge said.

Over the past few weeks, Bellona’s Kallinika yacht had been off the coast of Lofoten in Northern Norway in protest of the seismic exploration for oil in the Northern part of the Barents Sea. This latest accident shows that the operations of Norway’s oil giant are not as safe as management insists them to be.