Nature reserve at risk of destruction if Kumzhinsky field is developed

Management of the State Nature Reserve of Nenetsky is fighting to stop federal authorities from going ahead with a tender for the development of Kumzhinsky gas condensate field in Nenetsky Autonomous District (NAD) in far northern Russia.

Published on February 1, 2007 by Anna Kireeva, translated by Maria Kaminskaya 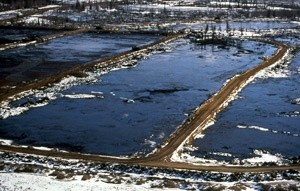 The tender is to be held by the Federal Agency for Subsoil Use, a structure of the Ministry of Natural Resources. But the condensate field is located on the territory of a nature reserve and has once seen a heavy gas blow-out accident, whose consequences have never been liquidated.

The nature reserve’s management has sent out petitions to the ministry and its federal subsurface management agency, as well as to the governor of Nenetsky District and other governmental bodies.

”According to our information, a special commission is going to gather in Moscow that will discuss the issue of developing the gas field. As of today, we have received no official opinion regarding this issue either from the federal bodies or from the governor of NAD,” the Nenetsky nature reserve’s director Andrei Glotov said in an interview to Bellona Web.

The Kumzhinsky accident
The Kumzhinsky gas condensate field was opened in 1974 – or before its territory happened to be part of an area that received the status of a national park. The gas field is located in the estuary of River Pechora. Kumzhnsky’s reserves are estimated to hold about 10 billion cubic metres of gas and around 3.5 million tonnes of gas condensate.

In November 1980, an accident took place at the Kumzha-9 well, some 80 kilometres from Naryan-Mar, a sea and river port on Pechora north of the Arctic Circle. Drilling was then performed on many locations on the river. As a result of the accident, a fountain of gas spurted from the well and poured onto the upper beds.

That led to the creation of new sediments that eroded the bank of one of Pechora’s arms, Maly Gusinets, which, in turn, led to the collapse of the drilling rigs. To stop gas from jetting out, a decision was made to install dams on Maly Gusinets. But that did not quell the outburst.

In May 1981, another idea floated – to conduct a nuclear explosion, which might plug the hole.

“But instead of liquidating the accidental discharge, the blast led to the multiplication of spots of rock rupture and of spots of condensate release,” says the nature reserve’s management of the situation created by the explosion. According to their information, gas is still leaking from the deposits.

After the accident, Kumzha-9 and 15 other wells of the field were suspended.

The consequences
In the summer of 1981, a two-kilometre stretch of Maly Gusinets was covered with oil slick; pollution could also be found in the basin of River Pechora. Fish stocks were shrinking.

In that period, scientists were recording deviations in the biological condition of the area’s living organisms. “Observations showed loss of scales in the tail ends of fish, liver accretion and other mutagenic effects,” says one of the letters sent out by the nature reserve’s management.

According to official data, maximum admissible levels of oil products in the water were exceeded by 3,000 times in the summer 2003, and by more than 2.5 million times in the winter 2005.

Nenetsky nature reserve
Nenetsky management are certain that violations during the field’s development – including a production-induced alteration of the terrain – are simply inevitable and will in the near future affect the ecological condition of the reserve’s coastal territories and the well-being of its populations and flora.

Furthermore, the area where further development is slated is located only 2.5 kilometres upstream from the reserve’s border and is part of the territory of the regional state wildlife sanctuary Nizhepechorsky, which was formed in 1998.

Both the Nenetsky nature reserve and the Nizhepechorsky wildlife sanctuary stand sentinel over the estuary of Pechora, which is included into the Ramsar List of Wetlands of International Importance of the 1971 Ramsar Convention. There are currently 154 contracting parties to the convention. They are actively seeking to preserve and restore the biological diversity of marine, estuarine, lake, river and wetland ecosystems.

Management’s position
As Nenetsky management say in their letter, there is absolutely no question that the Kumzhinsky gas field must be removed from the tender’s terms, and the protective dam must be renovated and reinforced. According to environmentalists’ estimates, a complete liquidation of the consequences of the Kumzhinsky accident will require about RUR 50m ($1.887m).

The nature reserve’s position is clear: “We believe that conducting any works in the estuary of River Pechora that are aimed at the production and transport of hydrocarbons is inadmissible and will unequivocally lead to such effects that their sheer scale will be beyond comparison to those that took place as a result of the 1994 oil pipe accident at Usinsk.”

The neighbouring Republic of Komi is sadly aware of the environmental disaster that occurred as the result of a pipeline accident in 1994. According to a variety of sources, the amount of oil that spilled out through multiple holes in the old pipeline was between 100,000 and 120,000 tons. According to the official version, only 60,000 tons of oil spilled into the environment.

At that time, news agencies from throughout the world reported on the tragedy in Usinsk, while only the local oilmen pretended for a long time that nothing had happened. They tried to clean up the results of the spill for about a year, but even years later, the quality of the cleanup operation carried out was drawing complaints from local residents.