MURMANSK—Workers are continuing to clean up the consequences of a spill from a major oil pipeline in the central Russian Republic of Udmurtia and are trying to stop oil products from getting into the Cheptsa River, which supplies water to nearby villages and towns. 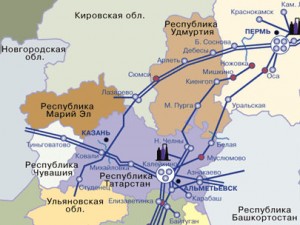 We know that the information about the spill was imprecise. We would like to get precise information. We are happy that the cause of the accident is known and that the company has taken responsibility on itself, said Bellona’s project manager for Russia, Kristin Jorgensen, in an interview from Oslo.


Bellona thinks that the environment has been damaged, and that the oil spill should be cleaned up before spring.


The spill occurred on January 30 in the Debessk region, 2 kilometres from the village of Ust-Medla and 50 kilometres from the Medlo River as a result of an accident on the 1,632nd kilometre of the major Kholmgory-Klin pipeline operated by Severo-Zapadnye Magistralnye Nefteprovody (S-ZMN). Udmurtia is located 500 kilometres east of Moscow.

The Udmurtia Natural Resources Ministry holds the Udmurtia regional administration of S-ZMN responsible for the accident. S-ZMN is a subsidiary of Transneft, whose vice president, Sergei Grigorev, told Bellona Web that the accident happened during planned repair works. Grigorev accepted that the company was at fault.


It’s what is known as the ‘human factor’. We admit responsibility, and are ready to pay the fine that the environmentalists levy against us, to pay for re-cultivation of the land and other negative consequences that resulted from the accident, Grigorev said.


Previous accidents in Udmurtia had involved only gas pipelines—the latest occurred in 2003—and no such accident had affected an oil pipeline in the republic before. The deputy head of the Udmurtia regional branch of the Federal Water Agency, Alexander Kokorin, told journalists that Udmurtia had never had such large-scale catastrophes, especially not in bodies of water.


He added that Udmurtia prosecutors had opened an investigation into breaches of environmental conservation regulations.

At present the amount of oil involved is still unconfirmed. The initial gusher reached heights of 35-40 metres, and the leak was stopped when it settled to a height of 1.5-2 metres. The Udmurtia Natural Resources Ministry web site put the spillage at 3,000 tonnes, but Transneft’s Grigorev disagreed.


I can’t say now how much oil was spilled, he told Bellona Web But the ‘lost’ oil was immediately collected in special containers. I can say one thing for certain—we lost about 10 tonnes of oil, which we now have to clean off the ground.


The Udmurtia environmental oversight agency also disagreed with Grigorevs estimates. The agency management was unable to provide figures, but said that the amount should be many times more.


Korobeinikov said oil products had seeped into the small Medlo River. This presents a serious danger, as the Medlo flows into the larger Cheptsa River, which supplies water to local villages and towns.


There are higher concentrations than allowed at the confluence of the Medlo and Cheptsa, but in the Cheptsa itself concentrations are below the limit, Korobeinikov said, adding that barriers have been set up to stop the oil reaching the Cheptsa.


According to Korobeinikov, the S-ZMN provided faulty information on the concentration of oil products in the Medlo. The company’s laboratory took samples to ascertain the oil levels, and found that the concentrations on February 1st were 0.0056 miligramsg/litre, which is within permitted levels.


But after the ministry’s laboratory returned a figure of 6.1 miligrams/litre—which is significantly over the limit—the S-ZMN data was changed to match.


Vladimir Grigorev, head of Udmurtia’s environmental oversight administration, told Bellona Web that his latest data showed that 3,000 cubic metres of oil-slime had been spilled. Vladimir Grigorev said that the maximum concentration of oil products in the Medlo River had been exceeded by 20-120 times depending on the sampling location.

Vladimir Grigorev also said that no immediate cleaning of the polluted area was planned, but rather a six-month monitoring operation.


Nothing awful has happened so far, he said. The most important thing now is to clean the bed of the Medlo (2-2.5 kilometres) before the spring melt. Otherwise the consequences could be serious.


He added that this was possible, and all depended on how well the work is done.


Experience shows that official communications always reduce the damage, said Andrei Ozharovsky of the Ecodefense! environmental group. Even when there was a spill in the Tver Region, not far from Moscow, they said that the spill was small and had been dealt with, although this was not the case.


However, practice shows that the danger is not usually dealt with in full, he added. Society should demand that oil companies get to work immediately, and not only where people are living, but everywhere where the environment suffers.