WASHINGTON, D.C.—US Republican Senator Richard Lugar today joined Democratic Senators Tom Harkin and Barack Obama in introducing the Fuel Security and Consumer Choice Act, a bill that if made law would require all US marketed vehicles to be manufactured as Flexible Fuel Vehicles (FFVs) within 10 years, Lugar said in a statement Wednesday. 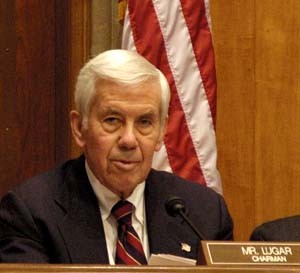 FFVs can use both regular gasoline and E-85 renewable fuel (motor fuel with 85 percent ethanol content). This capability would ensure access to an important alternative to foreign petroleum in the future as the nations renewable fuels industry continues to expand rapidly, the statement said.

Flexible Fuel Vehicles play an important role in increasing our use of renewable fuels and decreasing our dependence on foreign oil. Americas insatiable appetite for oil places our nation in a precarious situation of reliability on regions that have become increasingly hostile to us, said Lugar.

This bill would complement the exciting advances in the energy bill that Congress passed earlier this year that more than doubled the production and use of domestic renewable fuels. Passage of this legislation would send an important signal to the market that renewable fuels will be fully embraced by our nation.

The bill would require 10 percent of vehicles sold in the United States be FFVs within 18 months of its passage as law. The requirement would increase by 10 percent for each subsequent model year resulting in all new vehicles being FFVs within ten years.

Earlier this year, Lugar led 21 bipartisan Senators in introducing the Fuels Security Act to more than double the production and use of domestic renewable fuels including ethanol, biodiesel and fuels produced from cellulosic biomass. This legislation laid the groundwork for the renewable fuels section of the energy bill that passed the Congress in July 2005.

Costs and availability
At present there are some 4 million cars on US roads that can use E-85, and the estimated sticker price of an average automobile produced to use both fuels will rise an average of only $200, according to the National Ethanol Vehicle Associations web site.

Other major auto makers producing cars that run on both fuels are Isuzu, Mazda, General Motors, Mercedes, Mercury and Nissan, says the National Ethanol Vehicle Association. In Scandinavia, Saab has considerably boosted its own sales by introducing the duel fuel vehicles.

Dealerships selling the dual fuel cars, however, are located only in a handful of US states, primarily on the East Cost from Maine to Maryland, in the southern states of Arkansas, Louisiana and Arkansas, as well as in Alaska. These states are also the only states that offer E-85 filling stations.

As former chairman of the Agriculture, Nutrition and Forestry Committee, Lugar initiated a biofuels research programme to help decrease US dependency on foreign oil.