A Russian tanker loaded with 100,000 tonnes of oil has fixed its engine problem and is temporarily beyond danger, Norwegian authorities reported. The tanker was drifting with engine failure for about five hours off the North Cape, the northernmost point of Norway. 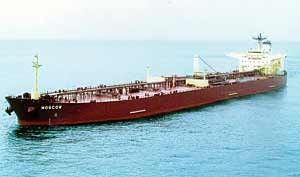 The drifting tanker was the 100,000-tonne oil tanker Moskva, owned by Straits Shipholding and operated by Novorossiysk Shipping Company. According to the Norwegian Armys Regional HQ North Norway, they observed the vessel on radar, and when contacted at noon the ships captain reported engine failure, but did not ask for assistance. At the time, the position of the tanker was 12 nautical miles off the coast of the North Cape, near the town of Honningsvåg in the Norwegian province of Finnmark.


The weather in the area was at the moment calm, but is generally known for rapid and dramatic changes. The closest coast guard vessel was reportedly ten hours away from the tanker. Ocean towing capabilities in the area are far from sufficient, especially for an oil tanker of this size.


If the engine had remained in failure, the time left for a rescue operation would have been critically limited. With the current weather conditions, the Russian vessel could have drifted ashore within twenty hours. But by early afternoon, the tanker gained control over the engine and the Norwegian Coast Guard reported the ship back on route at 2:50 p.m.


The increasing oil activity in the Barents Sea has been a constant source of worry for Bellona. The Barents Sea—teeming with approximately 150 fish species—represents one of the richest fishing areas in the world and a vast potential to become Norwegian fisheries’ breadbasket.


As far north as 71 degrees, the ocean’s ecosystems are extremely susceptible to pollution due to the cold. In this wintry environment, a major oil spill could have catastrophic effects on fish, marine organisms, and vulnerable species of sea birds.