NEW ORLEANS – On this, the sixth anniversary of BP’s Deepwater Horizon blowout in the Gulf of Mexico, the body count among sea mammals is still rising and has been caused by oil.

NEW ORLEANS – On this, the sixth anniversary of BP’s Deepwater Horizon blowout in the Gulf of Mexico, the body count among sea mammals is still rising and has been caused by oil.

The release of numerous reports tying huge bottlenose dolphin mortality rates, still births, respiratory and immune abnormalities that could depress the Gulf’s dolphin population by 50 to the 87-day crude gusher unleashed by the BP rig’s explosion on April 20, 2010 has hushed a half-decade long debate.

The evidence collected since by numerous federal and state agencies was poured into a highly guarded 2000-page report called a Natural Resources Damage Assessment (NRDA), whose main purpose is to identify areas of environmental damage from the spill, as well as possibly remedies. The National Wildlife Federation (NWF) on Monday published its analysis of the document.

A dolphin study published earlier this month as part of the release of studies appeared in the Belgium-based Diseases of Aquatic Organisms. It was co-authored by 27 scientists working for the National Marine Fisheries Service, other National Oceanic and Atmospheric Administration (NOAA) agencies, several marine laboratories, the Audubon Aquarium of the Americas in New Orleans, and the Louisiana Department of Wildlife & Fisheries. 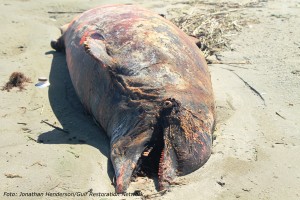 The study said pregnant dolphins in the Gulf of Mexico were found to be far more susceptible to late-term pregnancy failures, in-utero infections and fetal distress, compared to control groups.

Other NOAA studies that are now finally available in the public domain say than 1,400 dead dolphins and whales have washed up on the Gulf’s shores since the disaster, far more than the average before the spill. This spurred Federal officials to declare an “unusual mortality event” in the region.

The deaths have not stopped.

By April, she said the dolphin strandings from the Florida Panhandle to eastern Texas had reached 119 – more than the previous two years combined.

Lacey McCormick, communications director for the NWF cautioned in a telephone interview with Bellona on Wednesday that a toxic algae outbreak that hit the Gulf coast in January could have contributed to this precipitous spike in deaths. The outbreak washed up thousands of dead fish and seabirds in Mississippi alone, according to the state’s Department of Environmental Quality. 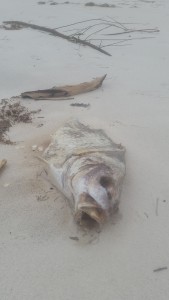 One of hundreds of dead drumfish along the shore in Pass Christian, MS that washed up in January during an apparent toxic algae outbreak. (Photo: Charles Digges/Bellona)

Nevertheless, the NRDA report also found that up to 75 percent of the dolphins studied in the Gulf are unable to conceive and carry a pregnancy to term.

It said it will take anywhere from 40 to 50 years for the population to rebound – if nothing else goes wrong.

What’s more, is that at least 30 percent of the 4.9 million barrels of oil that erupted into the Gulf over 87-days remains unaccounted for.

“Therefore, so remains [unknown] the impact on wildlife and habitats from that missing oil,” said Ryan Fikes, the NWF’s Science Director.

Officially 1.8 million gallons of the controversial dispersant Corexit were dumped into the Gulf of Mexico between April and July of 2011. Numerous witnesses, however, have shown Bellona proof that Corexit dumping sorties from airplanes continued well into 2011, particularly in Florida, sometimes over land.

“The new data regarding the health of dolphins in the Gulf of Mexico strengthens Bellona’s worries that the catastrophic immediate ecological damage caused the BP oil spill and corexit-use may be overshadowed by long term effects,” said Karl Kristensen, Bellona’s adviser on petroleum pollution. “The fact that a majority of dolphins in the region are still unable to reproduce successfully six years after the accident are indeed troubling and may indicate that chronic long term damage caused by toxins in the oil spill will cause more harm than the acute health effects that where experienced initially.”

Scientists began to observe a spike in stranded stillborn and juvenile dolphins along Alabama, Mississippi and Louisiana’s coasts from 2010 to 2013. Researchers now believe the dolphins’ mothers suffered chronic illnesses after being exposed to oil from the Deepwater Horizon spill off the coast of Louisiana.

“Our new findings add to the mounting evidence from peer-reviewed studies that exposure to petroleum compounds following the Deepwater Horizon oil spill severely harmed the reproductive health of dolphins living in the oil spill footprint in the northern Gulf of Mexico,” Dr. Teri Rowles, head of NOAA’s Marine Mammal Health and Stranding Response Program , said in a statement.

The University of Illinois’s College of Veterinary Medicine released a report the same day the NOAA study came out, which said 88 percent of perinatal dolphins found in the spill zone had lung abnormalities, including partially or completely collapsed lungs.

“Dolphin dams losing fetuses in 2011 would have been in the earlier stages of pregnancy in 2010 during the oil spill,” said Professor Kathleen Cosgrove, who led the study. The typical gestation period for dolphins is 380 days.

A blood sample drive conducted by LEAN revealed 100 percent of clean up workers and others affected by the BP spill showed high levels of Corexit and crude chemicals in their bodies. (Photo: LEAN)

The apparent confirmation that the spike in Gulf dolphin deaths was caused by the oil spill is disquieting to Gulf scientists and environmentalists because the similarities between the respiratory and immune systems of the dolphins and humans.

The health difficulties with which thousands of former cleanup workers and gulf citizens continue to exhibit, particularly respiratory, auto-immune and reproductive difficulties as well as cancer, offer a mirror image of those catalogued in the NOAA and University of Illinois dolphin studies.

No government assisted action, studies or funding have been dedicated for these patients, which one source at the National Institutes of Health says number as many as 170,000, but which former Environmental Protection Agency official and whistleblower Hugh Kaufmann told Bellona could hit as high as 20 million.

Marine Toxicologist, oil spill specialist and Exxon Valdez survivor Dr. Riki Ott has long said the dolphin deaths are an indicator of a human health crisis on the Gulf of Mexico.

She will be presenting her findings on the correlations between the two on Wednesday in Alabama via live stream at 17:00 central daylight time in the US, viewable here.