There’s something rotten in Brussels, and it bears the distinct smell of old eggs.

In a letter dated 19th of October, 57 gas companies and associations signed a letter addressed to European Union leaders in one of the latest attempts to keep natural gas relevant in a Europe set for climate neutrality by 2050. Old habits die hard.

Published on October 23, 2020 by Bellona Europa 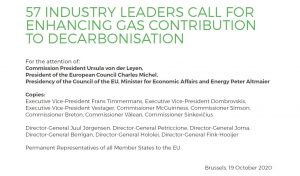 On 19th of October, 57 gas companies and associations signed a letter addressed to European Union leaders in one of the latest attempts to keep natural gas relevant in a Europe set for climate neutrality by 2050.

In a letter dated 19th of October, 57 gas companies and associations signed a letter addressed to European Union leaders in one of the latest attempts to keep natural gas relevant in a Europe set for climate neutrality by 2050. Old habits die hard.

While it’s deemed necessary to add mercaptan to fossil gas as a safety measure for easy detection – giving it a distinct smell of rotten eggs – the same is sadly not the case for the fossil gas’ lobby.  Much more difficult to detect, and perhaps for this very reason, the fossil gas lobby is seemingly everywhere. It’s influence on EU climate policy seeping in through disproportionate advantageous access to meeting places and decision-makers, as well as deep pockets. The fossil gas lobby push a narrative of a Europe hooked on gas for decades to come, resulting in stranded assets and seriously jeopardizing Europe’s chances of reaching set climate targets.

While the story of how the fossil gas lobby infiltrated Brussels is an old one, we want to draw your attention to its most recent efforts undermining and discoloring EU’s green ambitions.  Many observers applauded what they saw as a watershed moment within the EU in December of 2019– finally placing the fight against climate change at the very top of the agenda through the European Green Deal (EGD). Others, including the gas lobby, whose business model depends on the continued investment into fossil gas projects, rolled up their sleeves and got to work to undermine it.

Not surprisingly, the EGD was the subject for lobbyists in the first 100 days of Von der Leyen’s Commission.  A study by Transparency International found that it was the subject of almost one-fifth of all high-level lobby meetings. The most active lobbyist on the topic was Eurogas (with 8 meetings), closely followed by the International Association of Oil and Gas Producers (IOGP) (sharing the second place with two other organizations with 4 meetings each). This is disheartening, especially when considering that of the 34 organizations with more than one meeting during the first 100 days, only 5 were NGOs – based on numbers from Transparency International. Both Eurogas and IOGP signed the aforementioned letter, sent to the leaders of the European Union earlier this week.

To make matters worse, Corporate Europe reported in July that hardly any records are being kept on what was discussed during the over 151 meetings between business lobbyists and the European Commission on the EGD in the first 100 days. Of the 56 meetings with Commissioner Timmermans and his cabinet that Corporate Europe requested minutes from,  recorded minutes existed for only 3 of these. Many of the meetings in question is reportedly, you guessed it, with fossil fuel industry. But the reach of the fossil gas lobby is not limited to external lobbyists, it has been institutionalized as a part of the Trans-European Energy Infrastructure (TEN-E) Regulation.

Through the TEN-E, a group of companies – whose livelihood depend on the continued use of fossil gas – is in charge of estimating Europe’s future demand for gas. As well as suggesting which projects should be developed to meet it. Called the ENTSO-G (the snappier version of the European Network of Transmission System Operators for Gas), the group has substantially and regularly overestimated Europe’s future gas demand to their benefit.  Several of the signatories to the letter are ENTSO-G members – 11 to be precise.

A July 2020 report from Friends of the Earth Europe and Food & Water Action Europe, found that of European funding directed to fossil gas projects under the Connecting Europe Facility (CEF), ENTSO-G’s own projects have received 75% – amounting to over €1.1 billion. These funding decisions are made based on the aforementioned suggestions and overestimates of future gas demand made by ENTSO-G.

In fact, there is no need to invest in new fossil gas infrastructure at the scale suggested by the ENTSO-G, as found by a January 2020 study by Artelys. Continuing such investments are not only useless and redirect important funding away from sustainable projects, they are directly harmful to the EU’s climate ambition and seemingly only benefit the members of ENTSO-G.

We are in need of immediate action and investments to reach set climate targets. To facilitate sustainable investments with a direct climate impact, the EU has launched the Sustainable Finance Taxonomy. Jeopardizing the credibility of the taxonomy and its ability to assert real climate impact, the letter sent on the 19th of October argues for continued investments into unabated natural gas, now under the guise of sustainability.

The argument presented in the letter is that relative to coal, natural gas is less emission intensive – and should thus be a natural part of the green transition. The argument is not a new one, and was prevalent a decade ago, as it is today.  Since then, however, the economics of energy markets have shifted significantly. Stopping by unnecessary fossil gas projects as opposed to investing directly in renewable energy sources now makes little to no sense.

Currently, based on the recommendations of a technical expert group to the Commission, investments into fossil gas projects would not qualify as sustainable under the taxonomy unless accompanied by Carbon Capture and Storage (CCS). Were this to change we risk the taxonomy becoming a tool for greenwashing, jeopardizing the green transition as a whole.