Statoil North America will take a break from drilling plans off the coast of Alaska and does not aim to reach any production there until at least 2020, the company’s chief executive Bill Maloney told Bloomberg.

Published on March 7, 2013 by Charles Digges 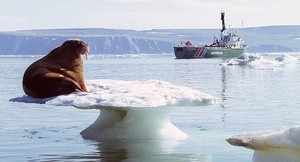 “We are taking a break in Alaska,” Maloney said. “We do not anticipate any production from the Arctic in our production forecasts.”

The news was welcomed by Bellona advisor Sigurd Enge as “a responsible step,” but was quick to point out that Statoil Norway’s plans in the Arctic Barents Sea are slated to contiune as scheduled this year.

Statoil spokesman Bård Pedersen told Bellona late last month that, Statoil will continue to follow a stepwise approach to the Arctic.” He added that, “We are starting a nine well drilling campaign in the Norwegian Barents [Sea] this year and will also drill exploration wells on the east coast of Canada.”

“We will continue to expand our Arctic portfolio,” he added.

Enge said that,” the reprieve for Alaska is a welcome one, but it would be desirable to see Statoil Norway taking the same steps in the Barents Sea.”

Pedersen today explained that Statoil had previously said it had made no decisions on drilling offshore in Alaska, and that no such decisions would be made prior to 2015.

“Costs are high in this area and we want to make sure that we use sufficient time before we make any drilling decisions,” he told Bellona Thursday.

The decision to hold back on drilling off Alaska comes as a result of Shell’s decision on February 28 to back off on drilling in the Chukchi and Beaufort Seas.

“I think we can all agree that it is wise to learn from each other, said Statoil North America exploration director Tim Dodson told Bloomberg. “It is better to let time work for you, not against you.”

Shell’s decision was a result of several failure over the course of the last year in its Alaskan drilling campaign.

First the company failed to have a spill-response barge on site before the drills reached oil-bearing zones, as it had promised, and a containment dome was damaged during testing.

Next, drilling in the Chukchi Sea had to be called off less than 24 hours after it began on September 9th due to a major ice floe.

Furthermore, a fire broke out on the Noble Discoverer rig that Shell had hired for the Chukchi Sea drilling, and the US Coast Guard discovered 16 safety violations on board, which have now been passed to the US justice department.

Lastly, the Kulluk, a circular drilling barge, broke away from its towing vessel and ran aground on its way to a shipyard in Washington State in late December.

Statoil in 2008 bought into 16 leases in the Chukchi Sea off Alask, 14 of which are a collaboration with Italy’s Eni. Statoil is the operator of these licenses.

The initial plan, as confirmed by Statoil spokesman Pedersen,  was to start drilling here in 2014 in two prospects named Amundsen and Augustine.

In addition to cooperation with Eni, Statoil is also a partner in the license Devil’s Paw where ConocoPhillips is the operator. There are plans to start drilling there in 2014.

Statoil also has a 40 percent stake in a license with Chevron in the Beaufort Sea off the coast of Canada.