Royal Dutch Shell has said that it will suspend its offshore drilling program in the Arctic for the rest of 2013 in order to give time to ensure safety.

Published on February 28, 2013 by Charles Digges 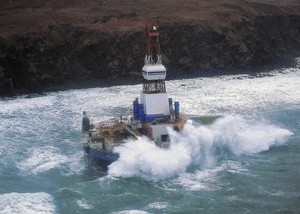 The decision to pause drilling for oil in the Chukchi and Beaufort Seas off Alaska was widely expected, following a laundry list of problems that Shell encountered last year.

The announcement also dovetails with an appeal from the United Nations Environmental Program (UNEP) late last week to world oil majors to leave the Arctic out of their drilling and exploration plans.

“This at least offers us a one year reprieve from drilling by Shell in the Artic following the UN announcement but the position of other oil majors remains unclear, and [Norway’s] Statoil is inexcusable,” said Bellona President Frederic Hauge.

“At the very least, Shell is publicizing its technical inability to drill the Arctic this year ­– but plenty of others are hovering to explore and drill this vulnerable environment that the UN says is unfit for exploring.”

Spokespeople for Royal Dutch Shell would not comment on whether their postponement was related to the UN appeal when reached by Bellona Thursday.

But Statoil, one of the companies spotlighted in the UNEP appeal, said Thursday that its activities would progress apace, despite the UN appeal.

“Statoil will continue to follow a stepwise approach to the Arctic,” said Bård Pedersen in a text message to Bellona Thursday. “We are starting a nine well drilling campaign in the Norwegian Barents [Sea] this year and will also drill exploration wells on the east coast of Canada,” said Pedersen.

We will continue to expand our Arctic portfolio,” he added.

Currently, the US Department of Justice is looking into safety failures at one of Shell’s rigs.

The move to delay Shells drilling “will give us time to ensure the readiness of all our equipment and people,” Marvin Odum of Shell Oil said to Bellona.

“We’ve made progress in Alaska, but this is a long-term program that we are pursuing in a safe and measured way,” Odum added.

Shell first obtained licenses from the US Department of the Interior in 2005 during the Administration of George Bush to explore the Arctic Ocean off the northern and north-western coasts of Alaska.

It has since spent $4.5 billion, culminating in two exploratory wells completed during the short summer drilling season last year.

But Shell ran into multiple problems during the drilling program.

First the company failed to have a spill-response barge on site before the drills reached oil-bearing zones, as it had promised, and a containment dome was damaged during testing.

Next, drilling in the Chukchi Sea had to be called off less than 24 hours after it began on September 9th due to a major ice floe.

Furthermore, a fire broke out on the Noble Discoverer rig that Shell had hired for the Chukchi Sea drilling, and the US Coast Guard discovered 16 safety violations on board, which have now been passed to the justice department.

Lastly, the Kulluk, a circular drilling barge, broke away from its towing vessel and ran aground on its way to a shipyard in Washington State in late December.

All of these reasons to not drill the Arctic have been outlined by the UNEP whose under-secretary, Achim Steiner, appealed to nations last week to abstain from drilling in the Arctic.

“What we are seeing is that the melting of ice is prompting a rush for exactly the fossil fuel resources that fueled the melt in the first place,” he told reporters on the release of the The UNEP Year Book 2013 on Monday.

“As the UNEP Year Book 2013 points out, the rush to exploit these vast untapped reserves have consequences that must be carefully thought through by countries everywhere, given the global impacts and issues at stake,” Steiner said.

The US Geological Survey estimates that some 30 percent of the world’s untapped gas reserves, and 13 percent of its oils reserves lay beneath the Arctic seabed.

Steiner singled out Russia’s Rosneft, Norway’s Statoil and US-based Exxon Mobil as three of the biggest offenders in exploring Arctic resources. Only Statoil immediately offered comment that it would continue it’s projects regardless of the UN’s wan prayer.

But Shell’s decision to abort drilling this year may be due to other causes than environmental concerns.

First, both its drilling rigs are likely to be stuck in East Asia, undergoing repairs. Shell has also faced widespread opposition to its activities from environmental activists.

“This is the first good decision we’ve seen from Shell,” said Mike le Vine of Oceana, a group, which focuses on ocean conservation.

“Given the disastrous 2012 season, our government agencies must take advantage of this opportunity to reassess the way decisions are made about our ocean resources and to reconsider the commitment to explore for oil in the Arctic Ocean,” said le Vine.

US Interior Secretary Ken Salazar has said his department will carry out a high-level assessment of what when wrong with Shell’s operations last year, US media outlets reported.