Norwegian energy company Statoil ASA says it has bought 70,000 acres of land rich in gas and liquid gas in West Virginia and Ohio, making the Norwegian state gas giant an operator in all major shale gas extraction areas in the United States.

Published on December 20, 2012 by Charles Digges 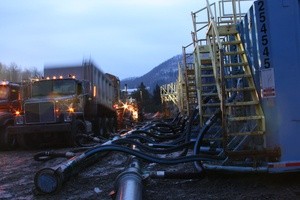 Statoil’s newest foray into shale gas in the United States –which carries with it dangers to underground water deposits, releases of the potent greenhouse gas methane, natural uranium and seismic disturbances – has Bellona and its US environmental counterparts worried.

A relatively young technology, hydraulic fracturing, or “fracking,” to extract shale gas has been heavily criticized by Bellona and US environmental groups – particularly the Washington-based Natural Resources Defense Fund (NRDC) – and both groups say regulation of fracking has yet to catch up to the oil and gas bonanza it promises.

Hydraulic fracturing is a gas extraction process developed by Halliburton that pumps millions of gallons of water and ‘fracking fluids’ that contain mixtures of up to 250 toxic chemicals under high pressure to break apart the rock, forcing the gas to the surface.

In particular, the US is placing heavy bets on shale gas for its own energy independence and for export. Bellona advisor Karl Kristensen has said that the group has been critical of Statoils shale gas production in the past, and describes its commitement to expanding it in the US as “riskier.”

“I think it’s worrisome, both environmentally and commercially,” he told Norway’s NTB television, and said Statoil was taking needless risks when numerous environmental challenges need to be resolved before the shale gas revolution proceeds.

US Congresses’s independent watchdog, the Government Accountability Office (GAO) is also worried about what these risks may be, and compiled two reports released in Ocbober, finding, essential, that shale gas should not move forward in the US until codified regulation is in place.

US GAO says shale gas risks can’t yet be quantified

Both constitute some 300 pages and each details shortcomings at shale gas and oil extraction sites discovered by the US Environmental Protection Agency (EPA).

Some for instances include violations of the US Clean Water Act, which requires some oil and gas production sites close to navigable waters and shorelines  to have an oil spill prevention, control and cleanup plan. EPA officials visited 120 sites in 2011 and found 105 – or 87.5 percent – were out of compliance

Futher, reported the GAO, EPA officials do not always have information on the types of activities taking place or equipment being used at well sites – or even where the well sites are – making it difficult for their enforcement staff to know where and when to conduct inspections.

The GAO concluded that shale development includes risks that cannot be quantified, and the magnitude or likelihood of potential adverse effects cannot be determined due to several factors, including insufficient scientific study.

Statoil entered the Marcellus in 2008 through a partnership with Chesapeake Energy.

“Statoil went in early for shale gas and has over time built up a diverse portfolio of some of the most attractive areas in the United States,” said Hole to the Norwegian newspaper Nationen. “We are already operating in the Bakken, and we are on track in preparations for operating licenses in the Eagle Ford next year, and with this newest transaction, Statoil will be the operator in Marcellus.”

Though the Obama Administration is treading carefully around the subject of shale gas, it clearly expects its revenues to bear out in Barack Obama’s second presidency. Obama’s oft-repeated promise on the campaign trail to exploit America’s domestic reserves of gas and oil were a clear reference to moving forward with shale gas, said Bellona advisor Kieth Whiriskey.