France’s Total has landed a reconnaissance team on the stricken Elgin platform in the North Sea to help stem the gas leak that forced its evacuation two weeks ago, but as fears of a catastrophic explosion recede, Total faces a considerable task plugging the well that blew out during an attempt to shut it down.

Published on April 9, 2012 by Charles Digges 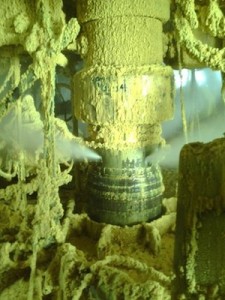 The primary procedure elected to stop the leak – termed a “dynamic kill” – will involve pumping mud directly into the well from the platform.

Total confirmed at the weekend that a team of eight – three engineers from Total and five from Wild Well Control, a well-blowout specialist firm based in Houston Texas – inspected the Elgin’s production and accommodation platform, and identified the source of a leak calculated to be releasing up to 200,000 cubic meters of gas and condensate a day. All engineers returned unharmed.

Total has said the gas leakage level has been decreasing, but when a spokeswoman was contacted by Bellona over the weekend, she could not immediately produce evidence to support that claim.

Total did release the first photo of the leak, in which can been seen gas spewing from four points on the surface wellhead.

Specialist equipment arrived on Monday from Houston Texas in Aberdeen, Scotland, 240 kilometers west of the well, to help perform the dynamic kill.

The French energy group is considering using a semi-submersible rig to pump mud into the wellhead to stabilize the leak before it can be sealed with concrete.

The intervention vessel Skandi Aker and a rig have been lined up to do the dynamic kill job, which will likely take a matter of weeks. Scottish Environment Secretary Richard Lochhead told the BBC that the dynamic kill operation is expected to begin within a week to 10 days.

“Though the reconnaissance team has delivered good news, we are not out of the woods yet,” said Bellona President Frederic Hauge.

“Much remains to be determined – how long workers can be aboard the leaking gas platform, how long it will take to staunch the flow, and how the British government can assure, with its fleet of aging platforms, depleting gas resources, and maintenance back ups, that something like this – or worse – will not happen in the North Sea again,” he said Monday.

The UK North Sea’s dwindling oil and gas reserves are pushing companies to tap unstable reservoirs at high pressure and extreme heat, while safety checks and maintenance are behind schedule, a North Sea rig auditor who works for the industry told Reuters.

Some North Sea platforms designed in the 1960s and 1970s are “falling to pieces” after exceeding their production lifespans, while more modern platforms are lagging well behind scheduled maintenance programs, the rig auditor, who requested anonymity, told Reuters.

The leaking G-4 well at the Elgin Platform dates to 1997, leading the auditor to say that a range of measures designed to prevent a leak must have failed on the platform, allowing gas to escape to the surface.

The reconnaissance team were the first to set foot on the platform since all 238 workers were evacuated on March 25 and early on March 26.

The crew of engineers was flown to Elgin Thursday by helcopter after weather delays Wednesday, and during their four-hour inspection, found no presence of gas on the main platform, which houses workers’ living quarters, and no gas on the 90-metre bridge that connects to the production platform, where the wellhead has been leaking.

The goals of the team were to take a “preliminary survey” of the leak area on the North Sea facility, gather data on the G4 well and confirm equipment tie-in points in order to perform the dynamic kill, Total said.

“We achieved our goals. Everything went as we would have hoped and the planned well intervention is achievable,” Wild Well Control said in a statement.

“There is certainly no showstopper to launch the well control operation,” said Wild Well Control.

Total is meanwhile still planning to carry out a parallel operation of drilling of two relief wells, a longer and more expensive option that could take up to six months, but which will be necessary if the dynamic kill fails. Transocean’s Sedco 714 rig is enroute to the site of the platform to begin relief well drilling operations, and is expected to arrive on Sunday or Monday, according to Upstream. The Rowan Gorilla V rig is also standing by outside the two-nautitical mile exlusion zone around the platform.

According to the four-hour inspection, the leak is spewing an estimated 200,000 cubic meters of natural gas into the air per day, forming a highly explosive cloud around the platform.

Jake Molloy of the RMT union, which represents thousands of offshore workers, told Bellona Sunday that he was still concerned by safety hazards posed by the ongoing leak.

“The continuing leak is not a good sign and it doesn’t sound like the most terrific idea to have people out there on the platform,” said Molloy in a telephone interview from Aberdeen. “But Total has contracted its experts and they now have a better view of the situation.”

The Scottish government is also starting its assessment of the environmental impact of the leak, the BBC reported.

Environment Secretary Lochhead said the evidence, so far, suggested the impact of the gas leak had been minimal.

He told BBC Scotland: “This is an ongoing gas leak and that is why we have employed our own vessel to go to sea to take samples, of the water, the sediment, fish stocks etc.

“I don’t anticipate any evidence of any potential impact on the marine environment, but as long as this gas leak is taking place we have to monitor, on a daily basis, what is happening, and understand what is happening.

Marine scientists expect to have the results from the tests on fish samples on Tuesday.

The gas leaking from the wellhead is seeping into the annulus, or pipe casing, of the G-4 well at the Elgin platform which was plugged in February 2011, through a limestone and chalk reservoir called the Hod formation at a depth of some 5000 meters below the sea floor, Thierry Debertrand of Total’s crisis team dealing with the well, told Bellona in a telephone interview earlier this month.

Abnormalities were noticed at the well in February of this year, and the crew that was evacuated from the Elgin on March 25 had been aboard in an attempt to address these issues when the leak became critical, Debertrand told Bellona.

It is thus far impossible to say how much gas remains within the Hod formation, as it was never commercially produced.

But Debertrand said the reservoir has a pressure of some 800 bar and is expansive and laterally distributed across a large area.

It is estimated that the Hod formation still contains high quantities of gas, dashing hopes that the gas leak will simply peter out on its own.

The G-4 well, and other older wells, may be susceptible to particular danger. It is known that other wells have shown increased annular pressure due to the Hod formation.